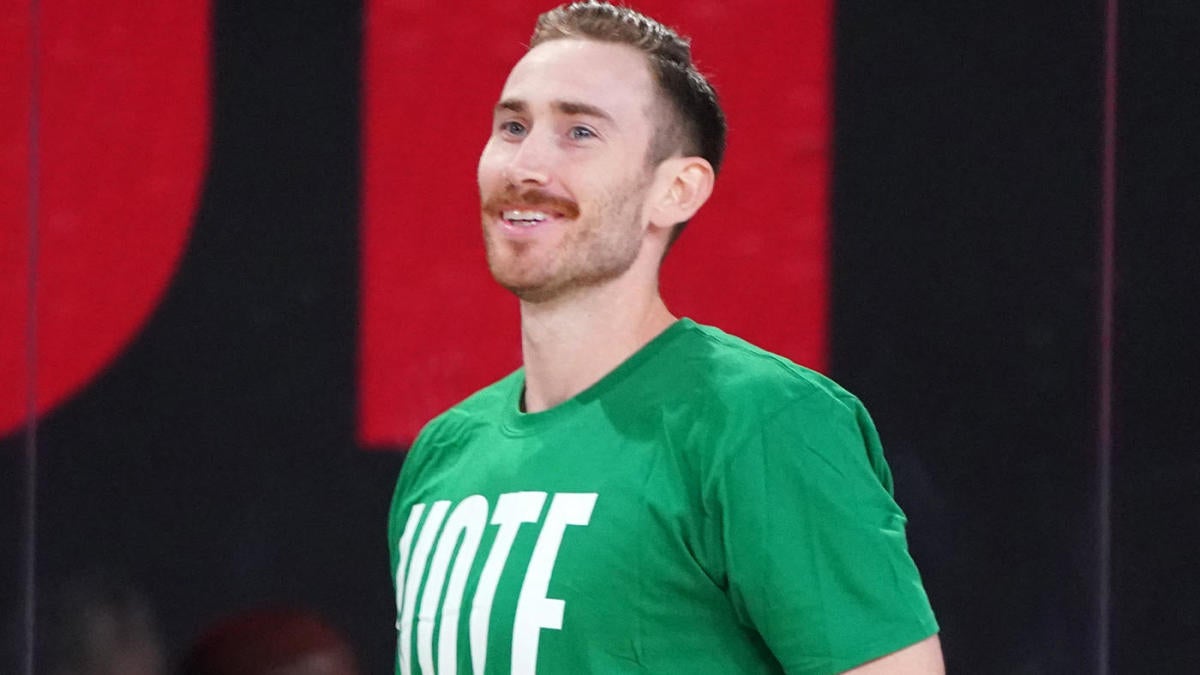 The 2020 crop of NBA free agents is not the most exciting we have ever seen, but that does not mean offseason activity should be less wild. Free agency officially started on Friday and there have already been some unpredictable twists.

While the biggest names on the board – Anthony Davis and Brandon Ingram – have not yet announced their intentions, lots of exciting and head-scratching decisions have been made. Here’s a look at some of the winners and losers of the NBA-free agency so far.

The last Dwightmare aside, the Lakers came away as one of the biggest winners of the night. They made a huge splash by agreeing a two-year $ 1

9 million deal with the reigning sixth man of the year, Montrezl Harrell, who reportedly turned down more lucrative offers to join the champions.

Before that, the Lakers made a clever move by agreeing to sign veteran guard Wesley Matthews to a $ 3.6 million one-year deal. Matthews replaces Danny Green, who the Lakers sent to Oklahoma City in the Dennis Schroder deal. That looks like a good move for the Lakers, as Matthews had almost the same average as Green last season and will earn $ 12 million less this year.

The Lakers were also able to bring Kentavious Caldwell-Pope, arguably the team’s third best playoff performer during the title race, on a three-year $ 40 million deal. Assuming Anthony Davis signs, as everyone expects, the Lakers look to be favorites to repeat the headline into the 2020-21 season.

Not all centers have been winners during this free agency period. Shortly after the free agency’s opening on Friday, Dwight Howard announced triumphantly that he would return to the world champions Lakers along with the lyrical phrase, “Purple and gold never get old.” But before Magic Johnson could even tweet about it, Howard quickly deleted his tweet followed by The Athletic’s Shams Charania, who reported that Howard “continues to consider all his options.” As you can imagine, NBA Twitter had a field day with Dwights indecision.

About an hour later, it was reported that Howard had agreed a deal with the Philadelphia 76ers for $ 2.6 million, which is less than the minimum the Lakers could have offered him at $ 3.1 million. According to a report from Yahoo Sports, it turns out that Howard thought he had a deal with the Lakers, which prompted the tweet, only for the team to quickly inform Howard that no formal offer was ever made. You can not invent these things, people.

Howard has been one of the most entertaining and polarizing players in the NBA throughout his career, so we should have known that his free agency would contain a flair for the dramatic.

Who among us did not spit out our half-chewed lemon pepper wings when Gordon Hayward turned down his $ 34 million option for next season? The man clearly knew what he was doing. Hayward, who averages 14 points, 5.4 rebounds and 3.7 assists on 36 percent 3-point shooting the last two seasons with the Celtics after suffering a terrible leg injury in 2017, secured a four-year $ 120 million, full guaranteed contract with the Charlotte Hornets, who apparently outbid the Indiana Pacers – reportedly Haywards’ favorite destination. After being referred to the fourth option at times with the Celtics, Hayward is likely to become a primary goal scorer and playmaker in the Hornets offense, similar to his role with the Utah Jazz.

The Hornets looked ready for the bottom and rebuild as they turned the franchise keys to LaMelo Ball, Devonte ‘Graham and their other young talent. Instead, they went and signed Hayward, who may not even be a No. 1 option at this point in his career, to what our Sam Quinn called one of the worst free agent contacts in recent memory. Yeesh. As Quinn points out, Hayward’s contract will actually cost the Hornets more than the original terms of the 2017 deal with the Celtics because Charlotte has to relinquish and stretch Nicolas Batum to free up caps. Hopefully Hayward is doing well and all is well in Charlotte, but it’s the exact type of contracts that are hampering franchises for several years if they go south.

We are not going to list every single player who has accepted a big deal as a winner, but we have to give a huge shout out to Fred VanVleet who accepted a four-year $ 85 million deal to return to Toronto Raptors. It’s the biggest NBA contract ever for an unnamed player, and after the deal was announced, VanVleet responded to its own 2016 tweet that reads: “Bet on yourself” with dollar sign emojis.

It’s hard not to root for this guy.

Reports of the NBA Center’s deaths are highly exaggerated. At least financially. Two of the biggest deals agreed after the free agency opened Friday went to Meyers Leonard (two years, $ 20 million from the Miami Heat) and Mason Plumlee (three years, $ 25 million from the Detroit Pistons, as we will speak). about later). Later, San Antonio Spurs center Jakob Poeltl accepted a $ 27 million three-year deal that surpassed them both. While Poeltl’s deal is not unreasonable, Leonard started for the Heat in the regular season but fell completely out of rotation during the final, while Plumlee averaged 17.3 minutes per game. Match (10.8 in the playoffs) as Nikola Jokic’s backup with the Nuggets, so it was a little surprising to see so much cash thrown up.

In addition to these two, centers Robin Lopez, Jahlil Okafor, Drew Eubanks and Derrick Favors also agreed to act on Friday. They have set the pay bar pretty high, with centers like Serge Ibaka, Marc Gasol and Tristan Thompson still without offers. The board members actually get paid.

The Clippers lost an embarrassing loss to the Nuggets in the Western Conference Finals and lost a big chunk from last year’s team when Harrell agreed to sign with the Lakers. Now their options are limited when it comes to centers to join Ivica Zubac on the list. After Harrell agreed to sign with the Lakers, the Clippers decided to give Marcus Morris a four-year, $ 64 million contract. Morris is a good player, but he had great leverage, knowing that the Clippers did not have the cap flexibility to go out and sign another wing of his caliber. Steve Ballmer may not mind cutting control, but when Harrell switched teams, the Lakers took an edge in the game for LA … so far.

The Blazers went through almost the entire 2019-20 season with extremely limited wing options, and that was clearly a priority position this offseason. After shopping for Robert Covington of the Houston Rockets, the Blazers added athletic wing Derrick Jones Jr. in free agency while signing Carmelo Anthony and Rodney Hood. It’s a deep, talented crop of wings to be placed around Damian Lillard and CJ McCollum, with Jusuf Nurkic and Zach Collins in the middle. After a bad year, Portland seems to be right back in the mix at the Western Conference.

Fox became the first player to receive a maximum contract in 2020 out of season, accepting a $ 163 million extension with the Sacramento Kings for five years. While 2017 colleagues, Jayson Tatum and Donovan Mitchell, are also expected to sign maximum extensions, there was at least some debate around Fox, so good for him to redeem. He now looks set to lead the Kings to the playoffs for the first time since 2006.

Look, maybe the stamps are playing chess, and we’re all sitting here trying to maintain the sanctity of our back row while playing pieces, but what they did on Friday was … weird. They agreed to deal with both Mason Plumlee and Jahlil Okafor, adding to their existing center crop of Dewayne Dedmon, Tony Bradley and recently drafted Isaiah Stewart. Yes, those are five centers on a team (they will reportedly give up and stretch Dedmon, but still). Then they agreed with Jerami Grant on a three-year $ 60 million deal with the promise of being more of an offensive focal point, while instead they could have retained Christian Wood, who agreed to sign with the rockets for three years, 41 million dollars. They also signed a deal with Josh Jackson, which is not a terrible move for a rebuilding team, but still adds the weirdness.

All in all, it was a strange start to general manager Troy Weaver’s first offseason with the team. We’ll have to wait and see if there’s a way to Detroit’s madness.

Re-signing Clarkson seemed to be a priority for the Jazz, but it was still a little surprising to see him accept a $ 52 million four-year contract. He is one of the best bench-buckers in the league, but perhaps the best bench-bucket-getter in the league, Lou Williams, earns only $ 8 million a year. Clarkson is now ready to earn $ 13 million annually.

When Jerami Grant opted out of his $ 9 million option for next season, we knew he was going to get paid – we just thought it would be by the Nuggets. Grant came from a breakout performance in the bubble and instead chose to sign a three-year $ 60 million deal with the Detroit Pistons. To add insult to injury, Grant reportedly had the same offer on the table from Denver, but was lured by a larger role in the Pistons offense. Grant grew to a third star alongside Nikola Jokic and Jamal Murray, so this is a gross loss for the Nuggets, despite securing JaMychal Green on a two-year $ 15 million deal to help fill the void and frontcourt.

On the plus side, Denver fans will see the Argentine human highlight film Facundo Campazzo for the next two seasons.

This is a great time to be a 3-point shooter in the NBA. Sharpshooters Danilo Gallinari (three years, $ 61.5 million), Joe Harris (four years, $ 75 million) and Davis Bertans (five years, $ 80 million) agreed to enter into contracts totaling over $ 216 million on Friday with an annual average of $ 18 million. Gallinari actually made history with his contract – it’s the most lucrative multi-year deal for a player over 30 without an All-Star appearance, according to ESPN’s Adrian Wojnarowski.