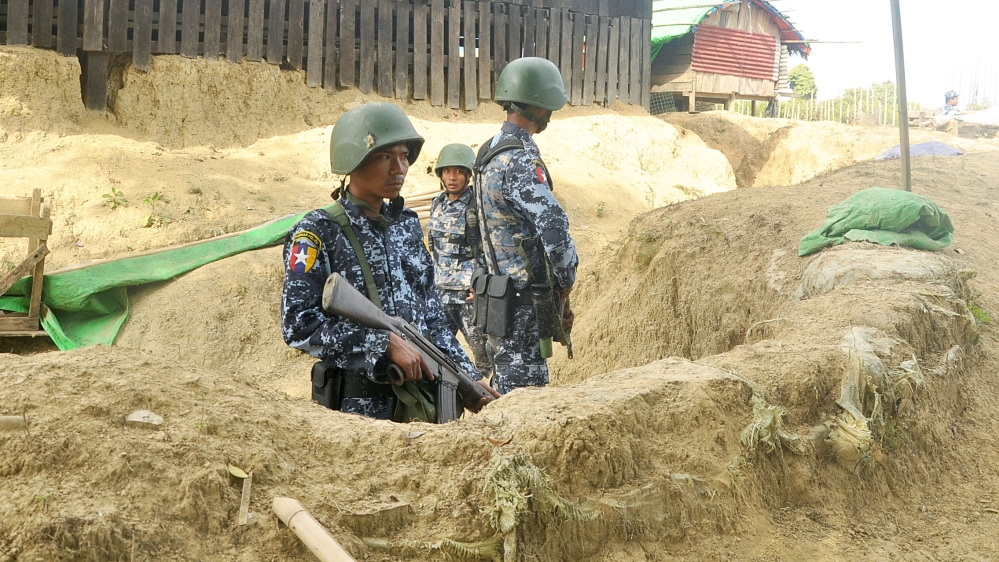 The same units of the Myanmar military that in 2017 were implicated in a brutal crackdown that drove hundreds of thousands of mainly Muslim Rohingya from the country once again, as they step up their campaign against ethnic Rakhine rebels, Amnesty International has said.

The conflict in western Myanmar's Rakhine state escalated in January after 13 police officers were killed in a co-ordinated attack by the Arakan Army, prompting the civilian government of Aung San Suu Kyi to order the armed forces to "crush" the group, which recruits from the largely-Buddhist ethnic Rakhine community

In a new report on Wednesday, Amnesty said its investigations showed crimes and human rights violations were committed by soldiers from the Rakhine- based Western Command, which was also implicated in atrocities against the Rohingya in August 201

Victims also identified soldiers from the Myanmar Army's 22 nd and 55 th Light Infantry Divisions, usually operating in other parts of the country.

"Less than two years since the world outrage over the mass atrocities committed against the Rohingya population, the Myanmar military is again committing horrific abuses against ethnic groups in Rakhine state, "Nicholas Bequelin, regional director for East and Southeast Asia at Amnesty International, said in a statement.

"The new operations in state-of-the-art show, unreformed and unaccountable military terrorism and committing widespread violations as a deliberate tactic." More than 730,000 Rohingya, a minority ethnic group denied citizenship by Myanmar was driven into Bangladesh in the bloody crackdown in 2017. A United Nations fact-finding mission has called for the prosecution or top Myanmar generals for crimes against humanity and genocide over the violence.

'Running for my life'

The latest unrest, with the military now focusing on the Arakan Army, and group of an estimated 7,000 fighters battling for greater autonomy, has driven more than 30,000 people from their homes, according to Amnesty.

"There is a persistent culture of impunity," Laura Haigh, the Amnesty report's researcher, told Al Jazeera.

"It's not just a case of a few bad eggs," Haigh said. "This is very much a systemic, institutionalized problem with the Myanmar military that's not going to go away at sanctioning a few soldiers. This is not a country that's committed to accountability in any way, shape or form."

In April, the United Nations said it was " disturbed " by reports of continuing attacks in the restive state.

In its report, no one can protect us: War crimes and abuses in Myanmar's Rakhine State, Amnesty is urging the UN Security Council to refer the situation in Myanmar to the International Criminal Court and impose an arms embargo. It is also calling for sanctions against senior officials 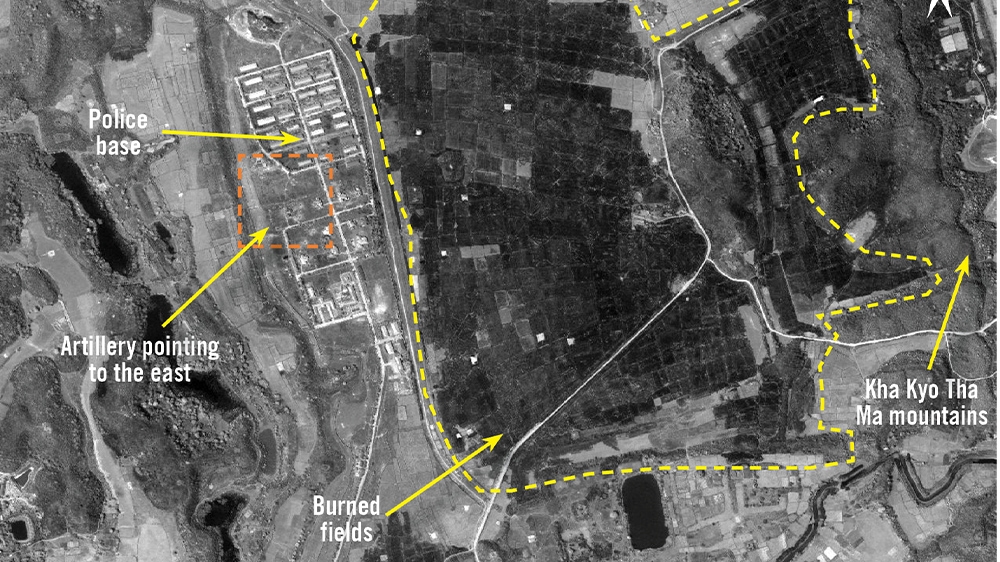 Satellite imagery from March 29 analyzed by Amnesty showing what appears to be artillery pointing east from a police base towards the north of Mrauk-U town. The artillery is pointing towards the Kha Kyo Tha Ma mountain range. The land between the base and the mountains has been burned [Digital Globe/Amnesty International]

Based on 81 interviews with various ethnic and religious religions in Rakhine, as well as discussions with humanitarian officials, activists and media, as well as analysis of photographs and satellite imagery, Amnesty detailed extrajudicial killings, arbitrary arrests, torture and enforced disappearances.

It said the army was involved in at least seven unlawful attacks that killed 14 civilians and wounded 29. A one-year-old January, a seven-year-old boy died after he was denied access to emergency medical treatment following a mortar attack.

In another incident in mid-March, a mortal wounded four people and destroyed the home of Hla Shwe Maung. Satellite imagery confirmed a building had been destroyed. "I heard an explosion," Hla Shwe Maung, 37, an ethnic Rakhine man, told Amnesty. "It was very loud and there was a big fireball that fell around us. I grabbed my daughter in my arms … when we looked back half our house's roof was gone."

The report also detailed abuses against Rohingya, including a helicopter attack on civilians cutting bamboo. At least six people, including boys, were killed and 13 wounded.

"The helicopter came from behind the mountain," and survived to Amnesty's researchers. "Within minutes it fired rockets. I was running for my life and thinking about my family and how I would survive." MYANMAR-CONFLICT-SECURITY A Myanmar border guard policeman gurads a police station in Buthidaung on January 7, 2019. – Myanmar has called on its military to launch operations against ethnic Rakhine “/>

'Climate of fear with Arakan Army'

Amnesty noted the Myanmar military's "four cuts" strategy under which it aims to rebel groups access to "food, funds, intelligence and new recruits" was having a significant effect on the local population both in Rakhine and neighboring Chin state.

The Chin Human Rights Organization ( CHRO) last week reported increasing cases of forced labor among local villagers in the southern part of the state bordering Rakhine. Village chiefs told the CHRO, working to promote and protect the rights of people, they were reluctant to ignore requests for local people to act as porters of fear of retaliation.

Local people also face abuses – albeit on a smaller scale – from the Arakan Army Amnesty said.

"The local population is caught between two forces," Haigh said. "We have this horrific abuse by the military, but there is also the climate of fear with the Arakan Army. It's always ordinary people who suffer as a result."

Amnesty said that it had its findings to the Office of the State Counselor and the Commander in Chief of the Myanmar Defense Services, but did not receive a reply.

The military's True News unit did not respond to Al Jazeera's request for comment.

The government has responded to the reports of military abuses by restricting access to Rakhine and clamping down on the media.

Criminal complaints have been filed against at least three Myanmar-language media while Reuters' reporters Wa Lone and Kyaw Soe Oo were released this month after spending more than 500 days in jail for reporting a mass of 10 Rohingya men and boys at Din Din during the 2017 crackdown.

The seven soldiers convicted of involvement in those killings have been given early release has served less than a year of their 10-year sentences.

"The Tatmadaw [military] has engaged in a massive cover-up of their crimes against humanity and genocide against the Rohingya," said Phil Robertson, Deputy Asia Director at Human Rights Watch. "The only reason these seven soldiers were arrested is because Wa Lone and Kyaw Soe exposed these cold-blooded murders in an investigative news story that could not be refuted.

" More than anything, the early release of these seven soldiers reveals Sr. Gen. My Aung Hlaing and Tatmadaw commanders don't really consider the Rohingya to be human, and were never committed to seeing anyone held accountable for their crimes in Rakhine state. "