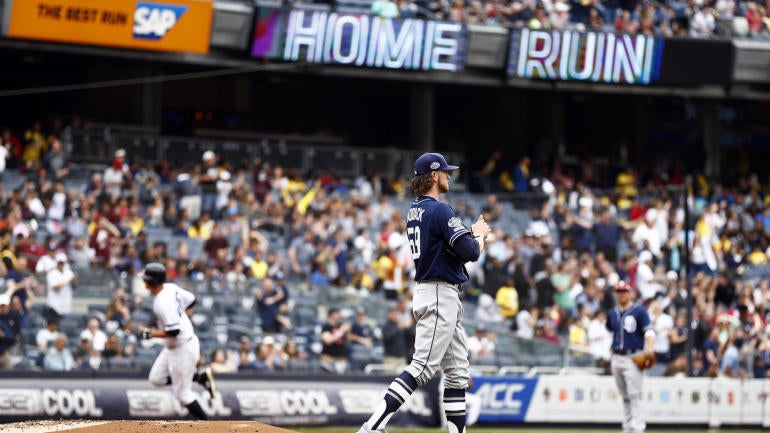 Wednesday brings us a slightly abbreviated 14-game slate of big-league action – the Twins and Brewers are both enjoying an off-day – with several afternoon contests as well. Here's what you need to know on Wednesday's games:

Select games can be streamed regionally via fuboTV (Try for free). For more on what channel each game is on, click here .

Who wins every MLB game? And what underdogs can give you a huge victory tonight? Visit SportsLine now to see the exact score of every MLB game, plus get full player stat projections, all from the model that simulates every game 10,000 times.

Baseball schedule / scores for Wednesday, May 29

Paddack rudely welcomed to the Bronx

Wednesday was the 10th time in Yankees history they opened a game with back-to-back home runs. Most recently, Brett Gardner and Aaron Judge did it last July against then-Blue Jay and current Yankee J.A. Happ. At 110.4 mph, Voit's home run is the hardest hit ball Paddack has allowed this year:

Gio Urshela added a solo home run in the third inning. These are the first three home runs Paddack has allowed to right-handed batters in his big league career. Going into Wednesday's game righties were .108 / .159 / .120 with one extra-base hit (a double) against Paddack. To his credit, Paddack settled down and got through five innings following the homer barrage.

On the other side, James Paxton returned to the Yankees after missing roughly four weeks with a knee injury. She was marvelous through four no-hit innings, striking out seven and generating a swing-and-miss on a whopping 17 of his 66 pitches. Because it was his first start from the injured list, the Yankees had Paxton on a strict pitch count, and he made the most of it.

Paxton now has a 0.34 ERA in five starts and 26 2/3 innings at Yankee Stadium this season. He's struck out 37 of the 99 batters he's faced at home. The Yankees, meanwhile, have won eight straight series and 12 of their last 13 series. It is their first eight-series winning streak since a nine-gamer in the summer of 1998.