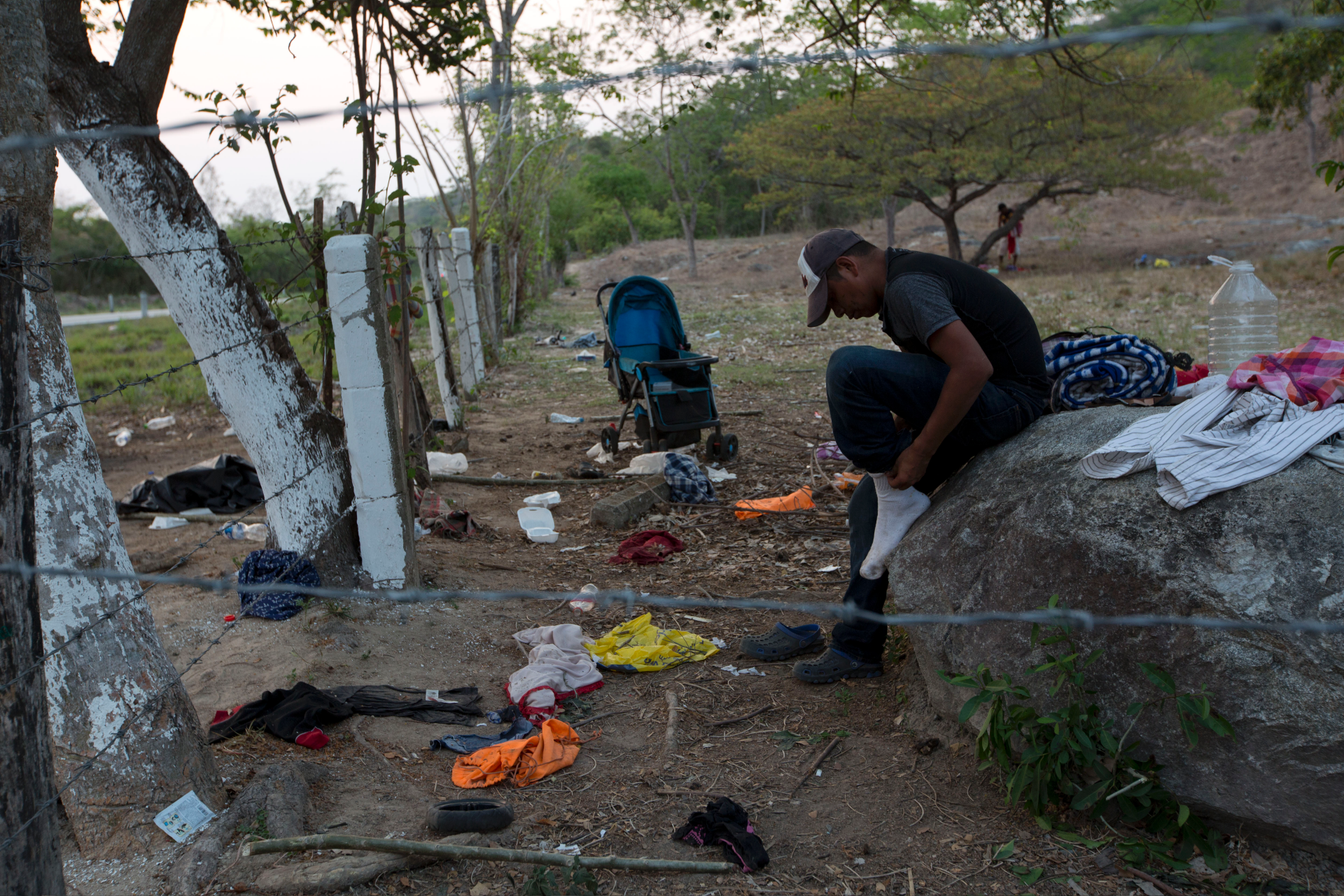 PIJIJIAPAN, Mexico – Central American migrants hoping to reach the U.S. now carry the added anxiety of the pursued after Mexican police and immigration agents detained hundreds in a surprise raid on Mexico's south.

the highway in Chiapas state to elite authorities.

Many had already learned they would not be received in the same hospitality that greeted previous caravans, and now they know they will not be safe walking along the rural highway either. Hundreds of the largest single raid on a migrant caravan since the groups started moving through the country last year.

Oscar Johnson Rivas fled up to mountain when officers converged on the caravan and spent six hours hiding in the thick vegetation before Carefully making his way back to the highway with others. Some migrants, including women and children, remained in hiding without food.

"What we did was find the bush and get as far away as we could so they couldn't grab us," said Rivas, a 45-year-old old soldier from El Salvador who said he had to flee his country because of gang threats

"They were grabbing us mercilessly, like we were animals," he said of the Mexican officials. "That's a barbarity, because we're all human." Police targeted isolated groups at the tail of a caravan of about 3,000 migrants who were making their way through Chiapas, Mexico's southernmost state.

As migrants gathered under spots of shade in the burning heat outside the city of Pijijiapan, federal police and agents arrived in patrol trucks and vans and forcibly wrestled women, men and children into the vehicles.

The migrants were driven to buses, presumably for subsequent transportation to an immigration station for deportation processing. As many as 500 migrants might have been picked up in the raid, according to Associated Press journalists at the scene.

Some women and children wailed and screamed during the detentions on the roadside. Clothes, shoes, suitcases and strollers read the scene after they were taken away.

Agents had encouraged groups of migrants that separated from the caravan to rest after some seven hours of the road, including about half of that during a broiling sun. When the migrants regrouped to continue, they were detained.

Agents positioned themselves at the head of the group and at the back. Some people in civilian clothing appeared to be involved in the detentions.

After seeing others being detained, some migrants started walking in groups and picked up stones and sticks.

Officials from Mexico's National Human Rights Commission observed the action from a distance. The National Migration Institute did not immediately respond to requests for comment.

Mexico welcomed the first migrant caravans last year, but the reception has gotten colder since tens of thousands of migrants overwhelmed with U.S. border crossings, causing delays at the border and anger of Mexican residents

The U.S. also has ramped up pressure on Mexico to do more to vote the flow of migrants. President Donald Trump railed against the government of his Mexican counterpart, Andrés Manuel Lopez Obrador, and threatened to shut the entire border down, but then quickly congratulated Mexico for migrant arrests just a few weeks ago.

Mexico already allows the United States to return some asylum seekers to Mexico as their cases play out. And government officials said in March they would try to contain migrants in the Isthmus or Tehuantepec in the south. It is Mexico's narrowest area and the easiest to control. Pijijiapan and Mapastepec are not far from the isthmus' narrowest point, which is a neighboring Oaxaca state.

In recent months, Mexican authorities have ported thousands of migrants, though they have issued more than 1

5,000 humanitarian displays that allow migrants to remain in the country and work

A group of about 10 prominent social organizations recently warned that detentions of migrants have been rising and accused immigration agents and federal, state and local police of violating their human rights.

The groups said the increased detentions have overwhelmed capacity at the immigration center in Tapachula. The National Human Rights Commission also said the facility was overcrowded.

In its most recent statement from last week, the Migration Institute said 5,336 migrants were in shelters or immigration centers in Chiapas, and about 1,500 of them were "awaiting deportation."

The Rights Commission said Sunday that more than 7,500 migrants were in detention, at shelters or on the road in Chiapas. It urged authorities to carry out a proper census of the migrants and attend to their needs, particularly children.