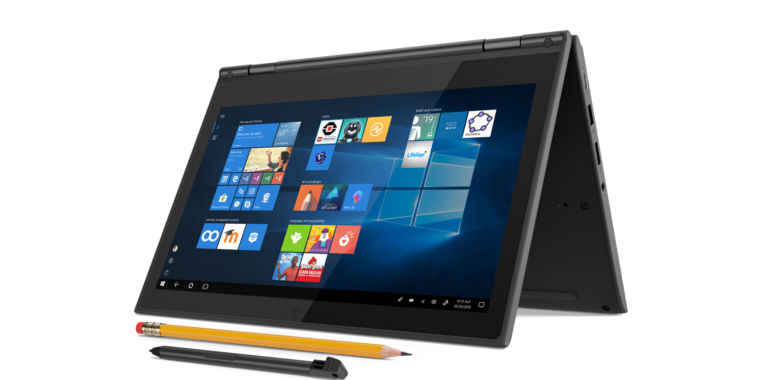 At the Bett educational technology conference in London, Microsoft has announced cheaper Surface Go pens, new Teams integrations with educational software, and a range of third-party Windows laptops and two-in-one devices with prices as low as $ 1

competitive pressure from cheap Chromebooks. The devices, which run Google's Chrome OS, threaten to displace Windows, especially within the United States. The company's response to this started in 2017 with the release of Windows 10 S. This locked-down, restricted version of Windows 10 blocks the use of arbitrary software, a measure that should act as something of a safeguard against ill-behaved and malicious applications. S should bring to Windows at least some of the robustness that Chrome OS sports. Paired with this version were cut-price Windows systems designed to be physically robust (and hence classroom friendly), in both a mix of laptop and two-in-one form factors.

Of these, the Lenovo 300e is perhaps most interesting. As a two-in-one, it supports stylus input, and it even has a garage to hold the pen. With students being students, however, even the garage may not be enough to prevent a pen from going astray and being lost. But this doesn't mean writing and drawing on the screen are no longer possible: a regular no. 2 graphite pencil (grade HB, for Europeans) will work, too, apparently without damaging the screen.

Microsoft's own Surface Go is a little pricier than these systems — you're looking at $ 498 for the cheapest version with a keyboard. But it's also being pitched at schools. Surface Go is a pen and the official Surface Pen is $ 99.99. To address this, the Microsoft Classroom Pen launched today. This works with the Surface Pro 3 or newer, and it has a more durable, harder tip than the regular pen, along with a slot to tether it to its corresponding device. The Classroom Pen will be sold exclusively to educators, and rather than being sold individually, Microsoft is selling packs of 20 for $ 799.80 (which amounts to $ 39.99 per pen).

might be meaningful to differentiate itself from the Google competition) is the software. Two applications in particular — note-taking software OneNote and collaboration system Teams — have become central to the company's education push. OneNote has long been popular with students, and its Class Notebook feature makes it straightforward for teachers to distribute reference material, create private student notebooks for student-teacher interaction, and use collaborative workspaces for class-wide activities.

But the much newer teams are seeing the most development in this area. At its heart, teams are a chat application designed to compete with Slack, but it has grown far beyond that: the company has been using it as the foundation for organizational communication and collaboration. For example, Teams has subsumed Skype for Business' realtime audio and video chat facilities, enabling discussions to move beyond text-based written communication.

For education, Microsoft envisages a world where each class has a Teams chatroom, with further chatrooms for group projects or peer communication. Microsoft has built integrations into school information systems so that student rosters and classes can be automatically populated, and the platform has support for distribution, grading, and tracking of homework assignments. Newly announced today, further extensions of this: Grade Sync, to allow grade information to be pushed back into Student Information Systems; mobile grading, so that the assignments can be graded from the Teams mobile app; and integration with Turnitin, a service that tries to detect plagiarism and improper attribution in written assignments.