MADISON, Wisc. – It took 18 games and more than two months.

But No. 2 Michigan basketball finally lost.

In an abrasive blunt game, Wolverines took a loss in Wisconsin on Saturday afternoon at Kohl Center.

Michigan (17-1, 6-1 Big Ten) didn't get much of anything from its two leading scorers, and Wolverine's compound relationship by turning the ball in 16 times.

Three takeaways from the game: 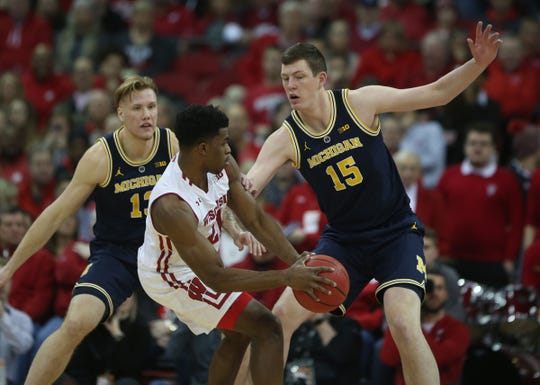 Michigan was down six with just over three minutes back.

It gave Michigan some life and cut Wisdom's leadership into a possession.

Teske and Isaiah Livers hit a couple of 3's but there were two empty belongings in between. And nothing left behind. It's not enough in crunch time.

Wisconsin went over four minutes without scoring in the second half.

But Michigan could not exploit, with wasted possessions and revenue.

It was therefore a three-point game from the Badgers basket that broke their drought-bound game. Wolverines had plenty of chances to expand their lead, but the offense was simply not there.

It was symptomatic throughout the game. Except for Jordan Poole and Teske, Michigan did not get any production from rotation.

The two leading scorers, Ignas Brazdeikis and Charles Matthews, could not get the whole game. The two combined to 0 points in 0 to 6 shots in the first half and completed the game with as many points as five points.

Both teams entered the game, which played at a slow pace. As Michigan has shown, it can be a winning formula as long as the offense does not turn over and does not turn the ball over.

That was not the case Saturday.

Wolverines entered the match third in the country in turnover per. Games, on average only 9.5. They ended with 16, tied to a season-worst.

Wolverines were careless with the ball in crucial moments. As Wisconsin pulled away in the second half, Michigan had three sales on four possessions. Wolverines threw the ball away in transition and in the half-court set.