Arm revealed a Cortex-A77 core with up to 20 percent better IPC performance over the Cortex-A76 plus a faster new Mali-G77 GPU. MediaTek combines both chips with its Helio M70 modem for a 7nm "5G SoC."

Just before Intel launched its 10nm 10th Gen Ice Lake processors on Computex, Arm revealed another advanced Cortex-A design and a new Mali GPU. Cortex-A77 is a faster variant of the Cortex-A76, while Mali-G77 updates Mali-G76, which, like -76, was announced a year ago. The chip designer also released more details on his Arm ML machine teacher processor. After Arm's message, MediaTek announced the first SoC to use Cortex-A77 and Mali-G77 (see below). 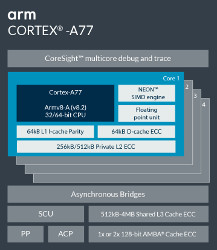 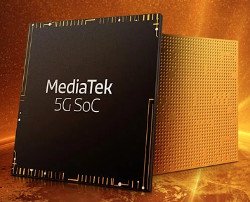 Cortex-A77 block diagram and MediaTek 5G SoC
(click images to enlarge)
The Cortex-A77 is designed for "next generation smartphones, laptops and other mobile devices," says Arm. It will also probably appear in some high-end, Linux-based embedded boards and devices.

The 20 percent IPC improvement is a minor boost compared to 35 percent jump from Cortex-A75 to -76, which debuted a new Artemis microarchitecture, which is also used by -A77. Like -A76 -A77 supports 7nm fabrication, which will be used by MediaTeks 5G SoC.

Cortex-A76 supports Cortex-A76 up to quad-core blocks with similar clock speeds. Increasing improvements include support for Armv8.2 architecture in addition to Armv8.1, along with AArch32 and AArch64 support. There are also dual branch prediction bandwidth and 50 percent increase in shipping bandwidth, including improvements.

Mali-G77 GPU debuts a new Valhall architecture. It gives a 30 percent increase in performance density compared to Mali-G76 and a 30 percent energy efficiency, Arm said. It is also said to be a 60 percent improvement in machine learning (ML). Arm expects the chip to offer 40 percent higher peak graphics performance. 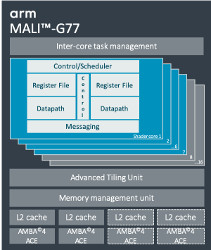 The new Valhall architecture introduces a new superscalar engine with greater energy efficiency and performance. It also debuts a "simplified scalar ISA with a new compiler-friendly instruction set." Other new features include dynamic scheduling of instructions and better support for modern APIs like Volcano.

The Mali-G77 provides wider execution motors than -G76, with 16 broadband and 32 FMA lanes per. The core, up from 24 on -G76. A new quad texture folder doubles Texels per cycle to four, which will improve the gameplay.

Arm ML design is expected to debut as a co-processor in mobile phones later this year. Arm now says that the chip will achieve 5 TOP & # 39; Watts, up from the expected> 3 TOP & # 39; Watt mentioned a year ago. The ML update also adds details such as the ability to use Winograd convolution to accelerate common filters by 225 percent compared to "other NPUs."

MediaTek's message about its upcoming 5G SoC Multi-mode chipset is short on details like the number of Cortex-A77 cores. The 7nm fabricated SoC will also include the Mali-G77, as well as a third generation APU (AI Processing Unit). MediaTek 5G SoC provides 4K60 video encoder and decoding and an internet provider that supports up to 80 megapixel cameras. 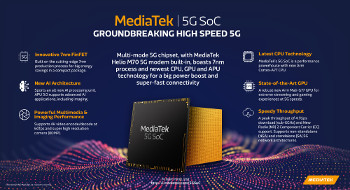 5G SoC infographic
to enlarge)
5G SoC is named after the integration of MediaTek's Helio M70 5G modem, but as shown in the CNXSoft post that warned us of the message, "5G SoC "is more of a descriptor than the actual product name. 7nm Helio M70 was announced a year ago, with plans to appear in smartphones sometime in 2019.

As Qualcomm's Snapdragon X50, the M70 is one of the first 5G smartphone modems on the market. The Helio M70 will offer up to 4.7 Gbps peak download using sub-6GHz frequencies. The chipset contains both LTE and dual 5G networks (EN DC) that enable multi-charge connection from 2G to 5G.