Wauwatosa police have arrested a 15-year-old Milwaukee boy who they believe opened fire at the Mayfair Mall Friday afternoon and sent eight to the hospital.

Police Chief Barry Weber said the suspect was arrested Saturday night and that the shooting was the result of an altercation between two groups of people in the mall.

“We know there were some sort of quarrels, and that was when the bullets started flying,” Weber said during a Sunday conference.

Police had said Friday that witnesses described the shooter as a white man in his 20s or 30s. But Weber described the suspect as a 15-year-old Spanish-speaking boy. His firearm was recovered during the arrest.

Four innocent spectators were among those who received non-life-threatening injuries during the shooting. 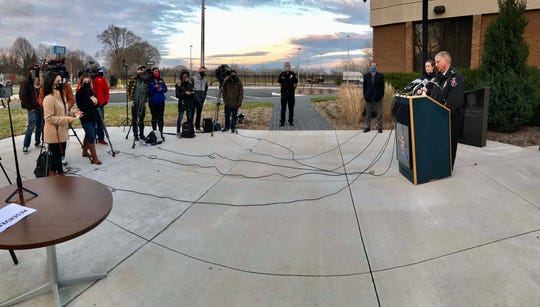 Wauwatosa Police Chief Barry Weber addresses the media during a press conference in the Wauwatosa Police Department on Sunday. Weber announced that a 15-year-old boy was arrested in connection with the shooting at the Mayfair shopping center on Friday afternoon, in which eight people were injured. (Photo: Mike De Sisti / Milwaukee Journal Sentinel)

The teenager left the mall as other patrons ran out, according to Wauwatosa police.

Weber said officers arrived within 30 seconds of the first call to police at 6 p.m. 14.49 The shooting took place near Macy’s on the lower level of the mall.

Officers were not aware that the shooter had left the mall when they entered. The shooter left the property on foot based on video surveillance.

Police said several other arrests have been made in connection with the shooting.

Weber said the original information provided about the suspect was “incorrect.” He said police later Friday night began developing leads that led them to believe the shooter was younger than first assumed.

Witnesses inside the mall reported Friday that they heard several shots around 6 p.m. 15, who sent people fleeing after the exits or to other places where they could safely remember in place. On-site journalists and news helicopters captured video of at least four people being loaded into ambulances in the parking lot.

The mall was closed Saturday, but reopened at 7 p.m. 11 Sunday.

A rally for President Donald Trump was held outside the Mayfair Mall while it closed on Saturday. Some of them at the demonstration carried weapons.

Mayor Dennis McBride said he wished they would not have held the demonstration there so close to the shooting.

“This demonstration, as I understand it, was planned a week in advance. I think it was unfortunate that they decided to come up with what happened the day before,” McBride said.

“I do not think people should come to political rallies with weapons,” he said. “I respect everyone’s rights for everyone for political rallies and protests. If it were up to me, I would have said, please do not come, do not bring weapons, honor the fact that our society is suffering right now.”

McBride urged residents to continue shopping at the Mayfair Mall.

“As soon as I leave here, I’ll go to Mayfair,” McBride told a news conference. “I have no problem shopping at Mayfair at all. I’ve never done that, and I never will. It’s a safe place. The holidays are here and I hope to see you all shopping at Mayfair. ”

The mayor said he plans to speak to Mayfair’s general manager on Monday. He was not sure if all the stores were open again.

Our subscribers make this reporting possible. Consider supporting local journalism by subscribing to the Journal Sentinel at jsonline.com/deal.