Man City vs Chelsea: Jamie Carragher beats Marizio Sarri's side after the first half 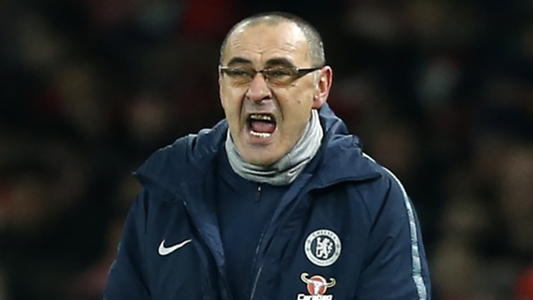 Maurizio Sarri has turned Chelsea to Arsenal according to Jamie Carragher, who branded Blues & # 39; first half performance against Manchester City a disgrace.

Chelsea went down 4-0 in the first 25 minutes after an early goal by Raheem Sterling, two Sergio Aguero strikes and an effort by Ilkay Gundogan.

And it could have got worse for Sarri's side if Aguero had converted from six feet when he was confronted with an open goal of scoring 1-0, but the Argentine flipped his shot far.

City continued to cause a 6-0 defeat over the 90 minutes with second half goals from Aguero and Sterling adding to their lead.

Speaking of Sky Sports in the interval, Carragher said, "I called a pair of Chelsea appearances a disgrace in this game, it's just as bad as anything."

"Looking at Sarri, just over halfway through his first season, but the worst thing I can say is that it looks like he's turned Chelsea to Arsenal. The Arsenal team just used to be hit by the last seven or eight years away from home in big games because they were too weak.

"You can never say it about Chelsea, no matter what has happened, they have been" weak, "Carragher added. a really weak football team here. "[1

9659003] Chelsea have been defeated by other big clubs in the Premier League this time and lost to Tottenham and Arsenal even though they beat City at Stamford Bridge in December.

They are now sixth in the league table, a point behind Manchester United In fourth place, while Sunday's battles hit them, they dropped by Arsenal on goal difference, and have some joy with only one victory in their last four top flight game.

This round also included a disappointing 4-0 loss for Bournemouth on the south coast.

Sarri side remains in the Europa League, FA Cup and Carabao Cup, facing a fifth round together with Manchester United and a final against City in the two domestic competitions.

Blues will face Malmö on Thursday in Europe next time and then be United next weekend.