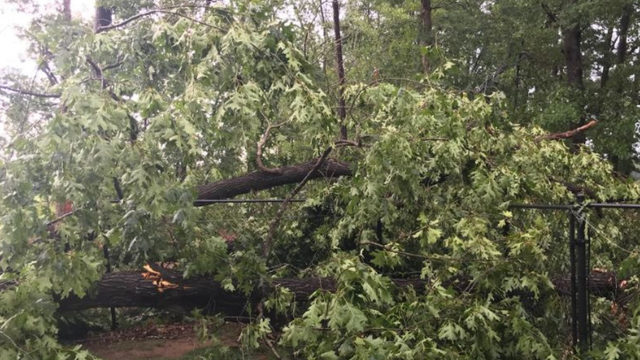 All of metro Atlanta and most of north Georgia are under severe thunderstorm watch until Saturday night.

These storms a capareble of Damaging winds to 60 mph, up to 1

Thousands of people are without power.

Severe Weather Team 2 Meteorologist Katie Walls says all of North Georgia is under threat of severe weather Saturday afternoon and evening. Action News throughout the night.

] The storms moving into the West Metro are capable of 40 mph, heavy rain and lightning. They are moving towards the southeast, impacting Coweta, parts of the South Metro into Troup, Meriwether, Pike, Upson, Lamar. pic.twitter.com/wk3wAxI8K8

Sandy Spring police report that a tree is down over power lines on Tanglewood Trail. Drivers are asked to avoid the area.

Viewers are reporting down trees and pea-sized hail in Newton County after storms rolled through.

@KatieWallsWSB and @wsbtv weather team were not kidding about the storms. Lots of trees down east of covington. Saw a trampoline tossed in some woods! pic.twitter.com/OSLO8yCGuU

A viewer just sent us these pictures of trees down in Newton County after strong storms went through: https : //t.co/6aGyzPXyN9 We're tracking more storms LIVE, NEXT on Channel 2 pic.twitter.com/UMBM0WBn1N

Over 11,000 people are without power in Georgia after severe storms, according to Georgia emergency mangement officials.

Parts of Morgan , Greene and Putnam counties are under severe thunderstorm warning.

A severe thunderstorm warning has been issued for parts of Jasper, Morgan, Newton and Putnam counties until 5: 00 pm

A severe thunderstorm warning has been issued for parts of Clayton, DeKalb and Fulton counties until 4:45 pm

NEW: SEVERE THUNDERSTORM WARNING has been issued for parts of DeKalb, Fulton, and Clayton counties for 60 mph wind gusts and 1 "size hail until 4:45 pm. pic.twitter.com/SUHU5DuTHS

A severe Thunderstorm Warning has been issued for Cobb, Fulton and Douglas until 4:15 pm

Heads up! The radar-indicated severe storms in eastern Douglas, southern Cobb are moving southeast at 15 mph, headed to East Point and College within the hour pic.twitter.com/kTOXxM2P6x

Walls says almost all of north Georgia and all of metro Atlanta is now under a severe thunderstorm watch.

Nearly all of the Ch. THUNDERSTORM WATCH minus Fannin, Union, Towns and Clay, NC. This means that some storms this afternoon will be capable of 60+ mph winds and / or 1 "size hail. Stay Weather Aware! pic.twitter.com/PZP1lEuOW2

The first Severe Thunderstorm Watch of the day is now in effect for the eastern parts of the Channel 2 viewing area.

SEVERE THUNDERSTORM WATCH issued for part of the @wsbtv viewing area. Some storms this afternoon could become severe, producing damaging wind gusts and hail to 1 ”. pic.twitter.com/8yQHGAzWzd