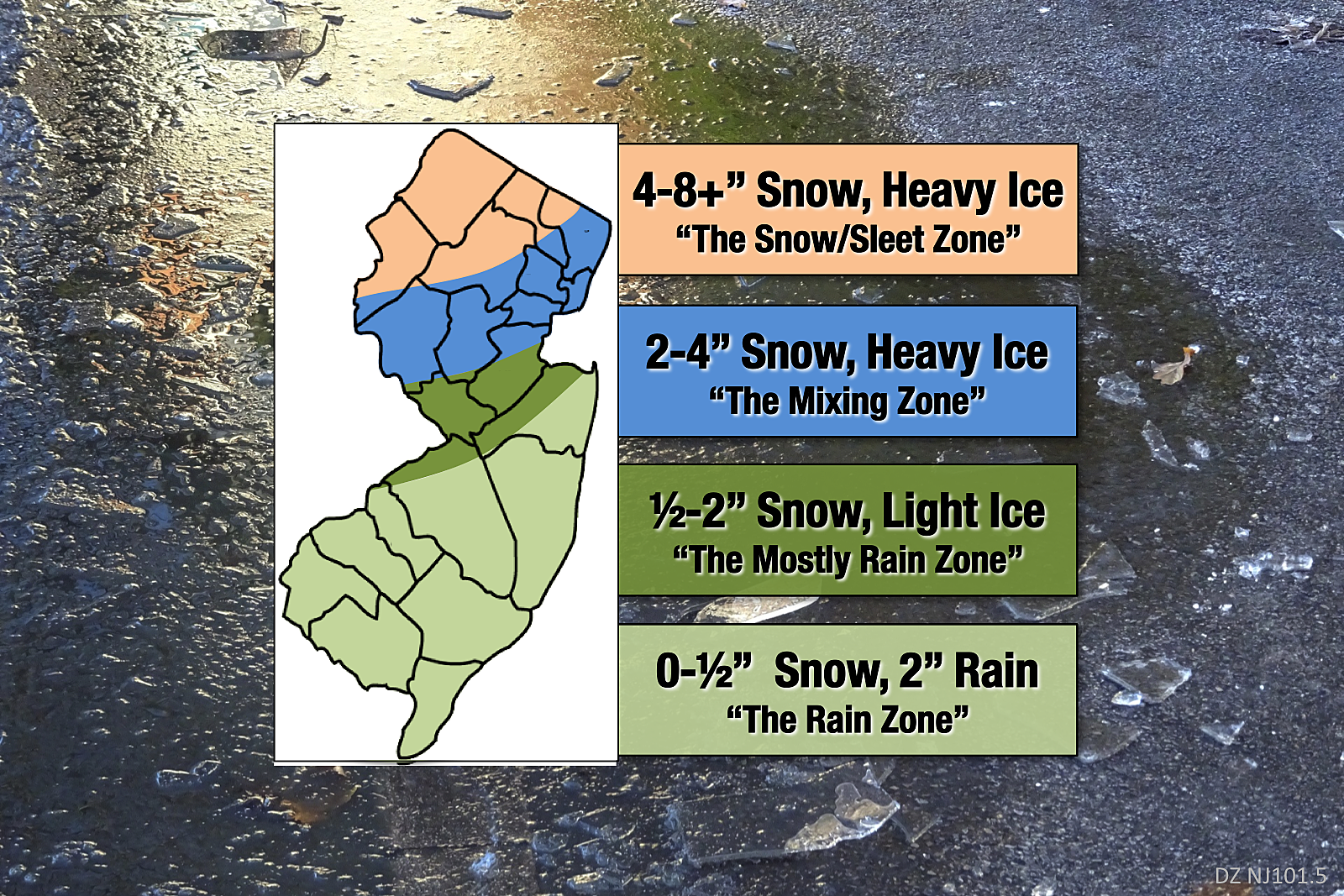 I have been stressing for a day or two now that for most of New Jersey our upcoming weekend winter storm is NOT a snob. (I've regularly called it a snow-ice rain.) The latest forecast models continue to carry the idea – we find ourselves even more on the "hot" side of the page. Less snow, more rain. – Heavy snow in North Jersey, especially right at the beginning of the storm – Heavy rain in most of the state, with thunder waves possible – Significant lard threat due to freezing weather, especially along I-78 and I-80 corridors – Wind gusts to 50 mph – Another ice threat ] from a flash freezing, which breakdown temperatures cause water powder and wet surfaces to freeze – Bitterkold with potentially hazardous wind radiation far below zero

Freezing of rain is one of the most challenging weather phenomena to predict. It takes a very specific set of conditions – a hot air penetration about half a mile to a kilometer above the surface (called a "hot nose") and a low pool of freezing air near the ground.

Best case A fast hit for snow for central and northern NJ followed by a quick transition to all rain. Snow totals would not be more than an inch or two for the vast majority of New Jersey. Still very cold and also nice ice cold. I would take massive heat to hyping "dead and gloomy" of any ice storm. It's ok – the potential danger here is worth the headache.

For my latest snow map, I made a few changes, primarily to the numbers instead of the contours: – Orange contour remains exactly the same, but I tweaked snow figures down (6-12 "becomes 4-8 + "). All models now show the true "thumping" of snow that is north of Sussex County. I'm still launching towards a slightly colder forecast than others have suggested, so I included "plus" to outperform results in this area. – Blue contour also covers the same area, but I also pushed snow totals down (3-6 "becomes 2-4"). I think this better communicates the snow potential that is limited to far north New Jersey and will much closer match this reality of the storm. – Dark Green Outline "Most Rain Zone", nudging further north, removes most of the I-295 corridor in SW NJ. – Light green contour "Rain zone" now covers close to the southern half of the state. This area can see rain, rain, rain throughout the storm. But my gut tells me that a quick coating of snow is possible right at the start. I've never included half an inch in a snow forecast before, but it just feels right to include the opportunity here.

– Saturday afternoon evening: A quick snowstorm comes from the west. (Probably just rain, south and coast.) Exact arrival time depends on the outside edge and location of the storm. As something, the models tend to a later "evening" start time. – Saturday night: As warmer air invades the atmosphere and the temperature rises, a transition from snow to wintery mix to rain will take place. Again, North Jersey will remain snowy for a little longer, while the southern half of the state (at least) will likely see rain for almost the entire storm. – Early Sunday morning: The "wintery blend" "The transition phase of the storm could lead to a longer period of gossip and frozen rain to North Central NJ. – Late Sunday Morning: Temperatures begin to clear, on a fresh wind. (Northwest, sustained 15 to 25 mph, gusts to 50 mph.)

– Sunday dinner: A short return to snow and / or winter blending is possible as thermometers deeper below freezing. – Early Sunday afternoon: Precipitation wraps up, but gusty cooldown continues. puddles and wet surfaces are over. – Monday morning: Temperatures in the single digits With the wind it will feel like -5 to -15.

As conditions tend to go downhill quickly on Saturday night, I offer my traditional reminder to be smart and safe! Our news, traffic and weather conditions are all at work at the weekend to pass on the latest information.

I'll probably slam another road blogger update, as the storm is coming up Saturday afternoon.