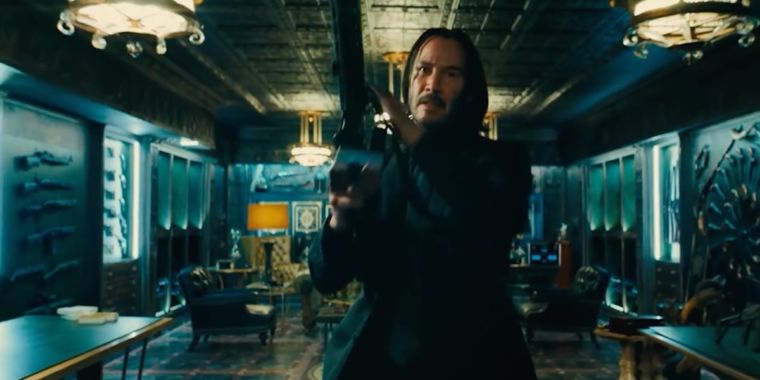 Fresh on the announcement that Bill and Ted 3: Face the Music will start shooting this summer, we get a new trailer for another Keanu Reeves starring vehicle: John Wick: Chapter 3 — Parabellum .

(Spoilers for first two films below.)

For those who missed the first two movies, John Wick (Reeves) is a legendary hitman (known as "Baba Yaga") who tried to retire when he fell in love and got married. Sorry, he's drawn back into the dark underground world by an act of senseless violence after his wife's death. Nothing will stop John Wick from seeking retribution. The first John Wick grossed more than $ 88 million worldwide for a $ 30 million to make, and was praised for his brisk pace, heart-stopping action sequences, and stylish noir feel.

So naturally, there was a sequel. In John Wick: Chapter Two Wick takes on a whole slew of Russian baddies but finds himself honor-bound (per the professional hitman's code) to go on one last assignment. Of course he succeeds — he's John Wick — but the client, Italian crime lord Santino D'Antonio (Riccardo Scamarcio), tries to cover his tracks by posting a bounty on Wick's head. Wick ends up killing Santino inside the Intercontinental Hotel, which is supposed to be a safe space for assassins, and is declared "excommunicato," cutting him off from the resources the hitman underground provides.

"You have no idea what's coming And that's where John Wick: Chapter 3 — Parabellum picks up, with Wick scrambling to find allies (and ammo) to fight off pretty much the entire underworld of assassins, all after a $ 1

3 million bounty is put on his head. The first trailer dropped in January, a juggernaut of action set against an ominous countdown to replicate the one-hour head start Wick has been given before his excommunication goes into effect.

In the new trailer, we get even more action and tantalizing glimpses of the fascinating underground culture of assassins, with their gold coins, markers, and almost medieval code of honor – an element that has contributed a great deal to the franchise's lasting success. There's even a call-out to The Matrix (yet another of Reeves' iconic roles) when Intercontinental owner Winston (Ian MacShane) asks what he needs. Wick responds, "Guns. Lots of guns."

New cast members include Anjelica Huston as the director of the crime lord High Table— "There is no escape for you" —and Halle Berry as a fellow assassin (and dog lover) Sofia , a reluctant ally who owes Wick a debt. "After this, we are less than even," she says in the new trailer. And wick faces a formidable Chinese assassin, who admits he's been looking forward to meeting him for ages. "So far you haven't disappointed." He rarely does. When Winston says in a portentous voiceover, "You have no idea what's coming." [19659015] John Wick: Chapter 3 — Parabellum opens May 17, 2019.