Kylie Minogue's Tears Of Joy As She finally plays Glastonbury 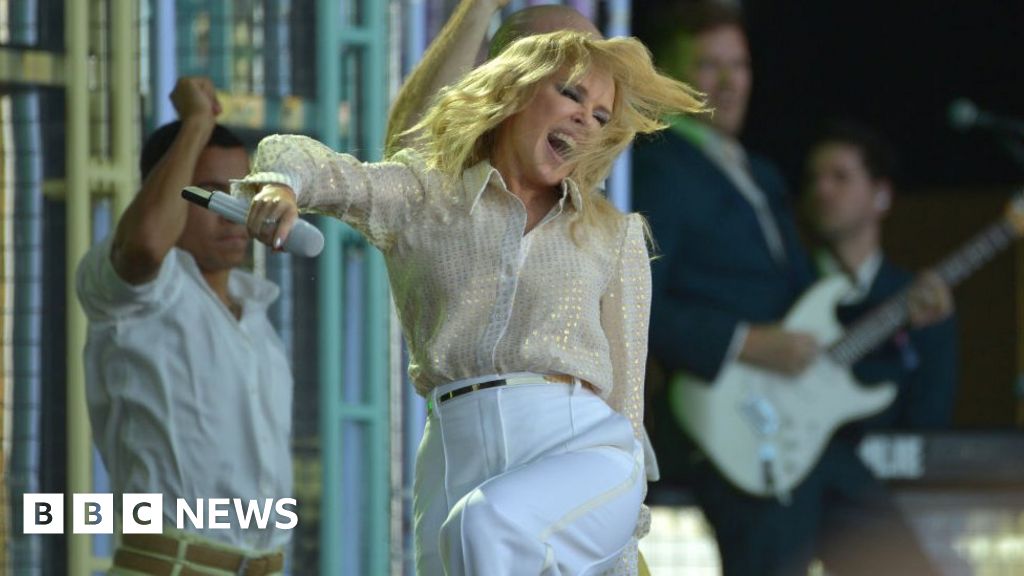 Kylie Minogue blinked back tears as she finally got to play Glastonbury's Pyramid Stage, 1

4 years after cancer forced to cancel a headline slot.

As the crowd chanted her name, she became emotional and had to compose herself before describing how to watch the 2005 festival from afar.

"I wished things were different – but life is what it is.

"We're all here at this moment."

The crowd welcomed her back to Worthy Farm with open arms, singing in unison to hits like I should be so lucky, Especially For You and Kids, and cheering as she shot pride-colored confetti into the air.

"Do I need to sing?" The singer asked during I should be so lucky, her face lit up in a million-watt smile

There were guest appearances from Chris Martin on a flamenco-tinged Can't Get Out Of My Head and Nick Cave, for the gothic murder ballad Wild Rose.

In an intense, sexually-charged performance, they locked eyes, slowly moving closer until they ended up in each other's arms, Kylie singing the final lines with her head pres sed to his chest.

She later paid tribute to Glastonbury's spiritual godfather, by mashing up Slow with David Bowie's Fashion.

But it was the pop classics that really got the crowd moving. Who'd been guessed in 1990 that, 29 years later, Better The Devil You Wanted to become one of Glastonbury's biggest songs?

Not Kylie – who for a long time shunned the bubblegum pop of her early albums. But in recent years, she's embraced the kitsch pleasures of tracks like Locomotion (mixed with Donna Summer's Bad Girls) and Je Ne Sais Pas Pourqois.

Festival-goers eagerly came along for the ride, although they seemed to know recent hits like All the Lovers better than 90s classics Shocked and Hand On Your Heart.

They even cheered her costume changes – four in all, from the white flared trouser suit of her opening number, to the shimmering gold dress and hostess heels for the encore.

"Just so you know, I've never seen so many people in my entire life," said the star, pausing to survey the fans who'd congregated at the Pyramid Stage.

"You're giving me the chills. "

You and the rest of us, Kylie.