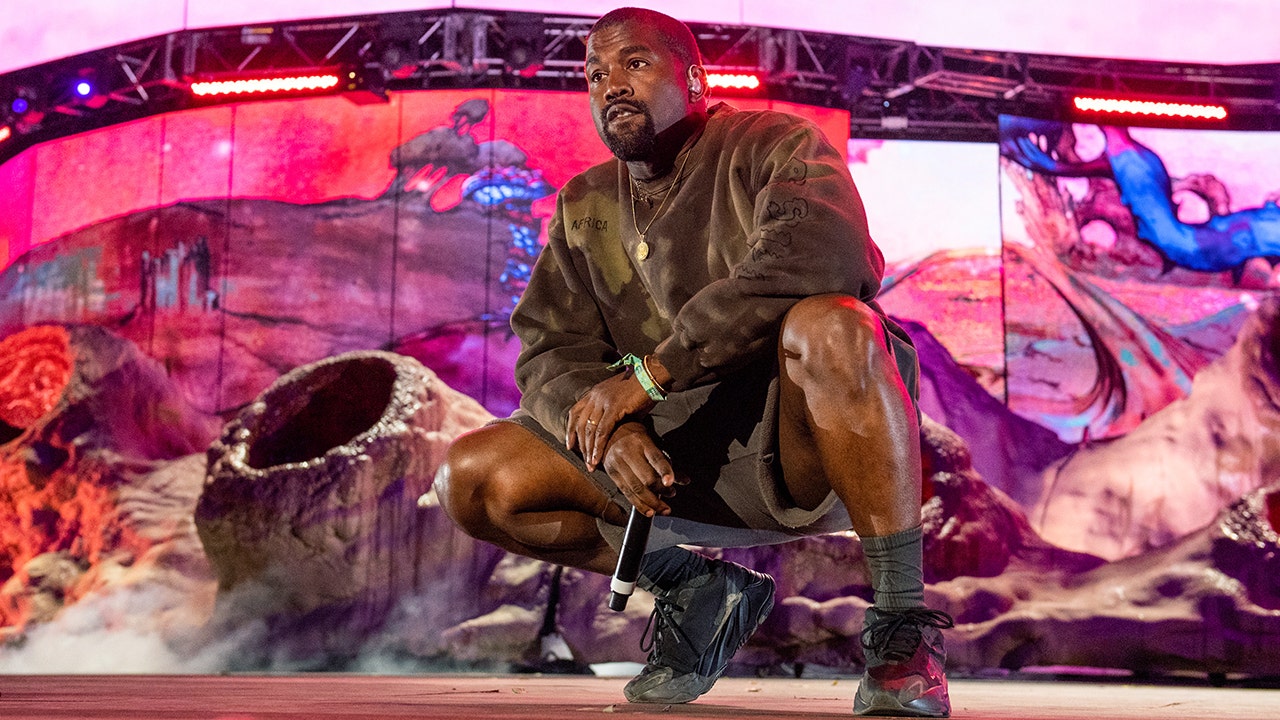 As promised, Kanye West brought his "Sunday Service" to Coachella on Easter morning, as dozens of musicians, singers and dancers performed a set of spiritual songs, covers and songs by the rapper himself – including a new one called "Water ”- for an audience of thousands from a hilltop on the festival grounds in Indio, Calif. While he rapped briefly on a couple of songs, West was generally the ringleader of the service, as he has been on previous incarnations in California and Oregon since he began leading the service early in January.

To reach the site, Coachella attendees walked some distance from the festival's parking section to a cordoned-off area of ​​the campground. A full band ̵

1; complete with harp – was set up on the plateaued top of a circular mound covered with freshly laid sod. A waist-high fence surrounded by the hill, which had a sort of VIP area extending up another grassy hill behind the stage. Across the field, food and beverages including orange juice, coffee and smoothies, plus chicken and waffles, breakfast tacos and burritos. Yet many more were interested in the "church clothes," – a. merch – for sale, including sweatshirts for $ 165- $ 225, "Jesus Walks" socks for $ 50, $ 70 T-shirts reading "Trust God" on the front and "Sunday Service at the Mountain" on the back.

The service opened with a slightly honest body prelude, as West and the dozens-strong choir, smooth in purple-beige robes, made their way toward the hill. Gradually they arrayed in a circle around the more robe-clad singers and dancers arrayed at the hill behind the stage.

After around 15 minutes of prelude, percussion kicked in and the band started playing jazz-fusion-flavored music reminiscent of Stevie Wonder's and Roy Ayers' early 70s albums. It was a large band, with at least five percussionists, in a big horn section, and as well as the dozens-strong choir, all of whom were wearing headset microphones.

After about 20 minutes the musicians stopped playing, except for a single guitarist keeping rhythm, as West took the stage alongside the percussionists, fist-bumping bandmembers along the way.

The music resumed, switching between the full band and organ choir members filed onto the hill, occasionally saying "He is risen!"

The livestream occasionally pulled back to an aerial shot that showed how the performance area, with the cleared grass around it, resembled an eye. (Many commentators on social media also pointed out the setup's similarity to the fictional world of the surreal 1990s children's TV show "TeleTubbies".)

After about 45 minutes the singing began in earnest, with the choirleader exhorting the singers as well the crowd: “Come on, turn up a little volume on that praise! Can we hear that name one more time? He is Jesus! ”

After a gospel vamp around the phrase“ You are the only power! That quickly morphed into "Higher," and another that seemed to be a rearrangement of Otis Redding "" Try a Little Tenderness "with a chorus of" Jesus won't leave us, "then Stevie's" As "and then a stirring take on Soul II Soul's 1990 hit "Back to Life," the chorus of which sounded stunning sung a capella by a gospel choir.

The music gradually segued into Teyana Taylor singing her West-produced "Never Would Have Made It," which Morphed into a take on West's "Fade," which itself interpolates Motown artists Rare Earth's cover of the Temptations "" (I Know) I'm Losing You. "

The choirmaster continued to lead the choir through phrases like "We absorb the light" and "We have everything we need." Dozens were more dancers around the hills surrounding the performance area, breaking out synchronized dance moves. 19659003] Through the performance, West – with his short-cropped hair dyed several shades of purple – was beaming and joining in, but not really performing until the end, when he sat down at a keyboard and chopped up some soulful vocal samples with beats while a choir member danced.

"Ye, we all want some of that brighter day!" the choirmaster shouted as the choir broke into Kirk Franklin's song of the same name.

The group continued vamping on various phrases and say "Poopity scoop," a reference to West's jokey song "Lift Yourself" – until finally West picked up a mic and, with his voice hoarse, rapped on "All Fall" s Down, "with the choir joining him on the chorus.

He then announced a new song called" Water, "a low-key song with spiritually themed lyrics and a gentle rhythm revolving around the chorus" We are water, " closing with some verses from "Ultralight Beam." West picked up the mic and hoarsely rapped the song's verses, finishing on his knees on the hilltop as cameras and applauding singers surrounded him.

Finally, he rose and smiled at the camera, pausing for several long moments before the band played a medley of gospel and soul covers and the dancers filed off of the hill.