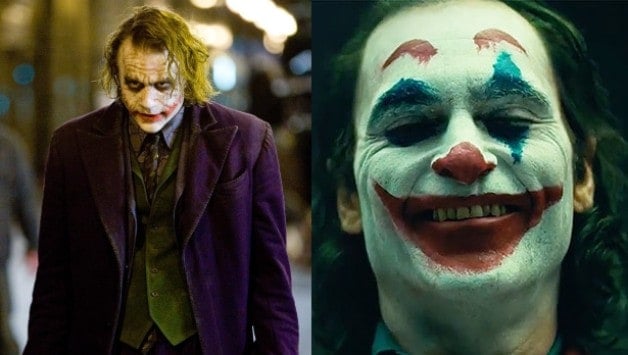 Joaquin Phoenix's Joker is set to hit theaters in October and now can get the film's star Joaquin Phoenix in a new image by digital artist Bryan Fiallos from his Instagram account under bryanzapp. The Dark Knight 's original theatrical poster

Heath Ledger set a new tone and bar for the character of the Joker that has fans cosplaying it to this day and even earned Heath Ledgar an Oscar win for his performance. Now, many fans and audiences appear to look towards Heath Ledger's iconic take to compare to future interpretations of the Joker, including the upcoming version played by Joaquin Phoenix. You can view the awesome image of Joaquin Phoenix striking the same pose as Heath Ledger's Joker below.

Joaquin Phoenix will be taking on the role of the Joker after Jared Leto's own interpretation in David Ayer's Suicide Squad, though it is apparently not the same exact Joker that Leto played. Joker will be directed by Todd Phillips and will have a more grounded character study of the iconic Batman with Joaquin Phoenix in the role.

According to Marc Maron, Joaquin Phoenix's take on the Joker will be more intimate and gritty, focusing more on the character as a person who is mentally ill. Coming later this fall, Joker is one of 2019's most anticipated films and this image will only have fans for more images of Joaquin Phoenix as the Joker.

What do you think of Joaquin Phoenix posing as Heath Ledger? Are you looking forward to Joker ? Share your thoughts below!

"Joker" centers around the iconic arch nemesis and is an original, standalone story not seen before on the big screen. Phillips' exploration of Arthur Fleck (Phoenix), disregarded by society, is not only a gritty character study, but also a broader cautionary speech.

Joker will be released in theaters on October 4, 2019.

Ben Affleck is officially out as Batman and it's a pretty sad day.

Words cannot describe how sad I am to see Ben Affleck announce that he's no longer Batman. His Batman is why I do what I do. In Batman v Superman: Dawn of Justice I fell in love with his comic book-accurate interpretation of the Caped Crusader. It was a breath of fresh air and it felt like we finally had the one true Batman.

It's been three years and we are officially going to receive a new Batman for his next movie. Last night, Ben Affleck announced that he will not return as the Dark Knight in Matt Reeves' The Batman and now everyone's attention has moved towards wanting to know who the next Bruce Wayne will be. Matt Reeves is said to be an actor who is around 20 years younger than Affleck while Warner Bros. wants someone older. My guess is that Reeves wants a fresh start while the studio wants an older actor for crossover potential.

In this list, I will discuss the actors I think can replace Ben Affleck as Batman using the parameters that Matt Reeves and Warner Bros. want. Hit Next to see our picks to play the Batman.

Michael Fassbender is an X-Men alum and no stranger to comic book franchises. The actor has shown multiple levels of range and could definitely handle the Batman / Bruce Wayne personality. If they go with the older range for the next Dark Knight, then Fassbender is probably one of the best choices to take over the role.

Barnes is out of a job after The Punisher season 2 and he's one of the best actors in that series. The second season tied up Barnes' arc on The Punisher and the actor has already told us that he'd love to play the Caped Crusader. Barnes definitely has the pretty boy look going on for him and I wonder what his take on Bruce Wayne could be.

Ryan Gosling needs to star in a superhero movie. Gosling would make a great Batman. Every role that he's done has shown us his capability and he could crush it as Bruce Wayne.

Jon Hamm is my top choice for an older Batman. If Warner Bros. wants to cast an older actor for crossover potential, Jon Hamm is the studio's best bet. He has a similar look to Ben Affleck, and he looks just like Bruce Wayne.

Armie Hammer is 32 years old and was cast as the Caped Crusader in George Miller's Justice League: Mortal . That movie will never see the light of day, but that doesn't mean that Hammer is a second shot at being the Batman. He's charming, and will probably give his all for this role. Armie Hammer is a great option because he is young enough for Matt Reeves and Warner Bros. Could work in a way for him to cross over with the rest of the DC Extended Universe.

Game of Thrones alum Richard Madden is my top choice to replace Ben Affleck as Batman. The actor is young, has the look and definitely has the acting chops to play the duality of Batman and Bruce Wayne. Madden just won the Golden Globe for Best Actor in a television series for the BBC drama Bodyguard so Warner Bros. may want to quickly snatch him up.