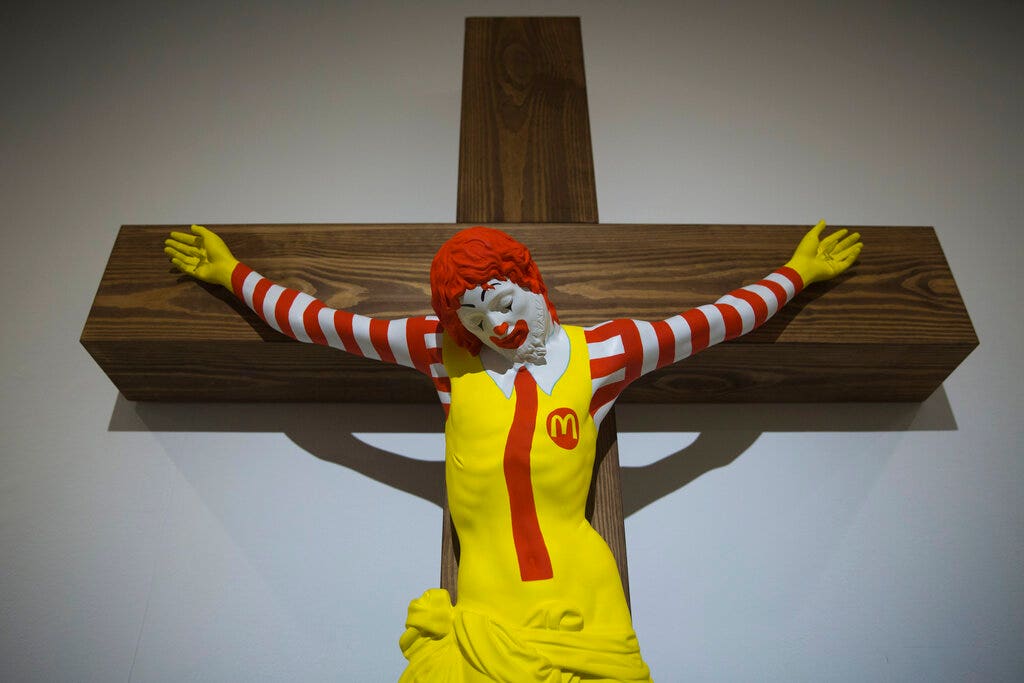 A work called "McJesus", which was sculpted by Finnish artist Jani Leinonen and depicts a crucified Ronald McDonald, is seen as part of the Haifa Museum's "Sacred Goods" exhibition in Haifa, Israel. Monday, January 14, 2019. Hundreds of Christians called for the removal of the sculpture to protest at the museum last week. (AP Photo / Oded Balilty)

The controversial "McJesus" art sculpture – depicting a lifestyle Ronald McDonald hanging from a cross – will be removed from an Israeli museum after violent protests in Haifa, Israel.

The city's first female mayor promised the removal of the "offensive" work of art from the Haifa Museum of Art Thursday, drawing criticism from spokesmen and civil liberties groups.

"The work will be removed and returned as soon as possible," said Mayor Haifa Einat Kalisch-Rotem, thanking local churches for their efforts to help reach to a solution and prevent further violence.

Hundreds of Christians in the Holy Land called for the artwork – intended to be a criticism of capitalism worship – removed. The police said rioters who opposed the art have thrown rocks and a firebomb at the museum and left three officers wounded. The authorities scattered the crowds with tear gas and stung grains.

Kalisch-Rotem said the decision to remove the statue was made "in keeping" with churchmen. She met with the local Greek Orthodox and Greek-Catholic church president after they had requested that the court removed "McJesus" earlier this week.

An artwork called "McJesus", which was sculpted by Finnish artist Jani Leinonen and depicts a crucified Ronald McDonald, is seen as part of the Haifa Museum's "Sacred Goods" exhibition in Haifa, Israel. Monday, January 14, 2019. Hundreds of Christians calling for the removal of the sculpture protested in the museum last week. (AP Photo / Oded Balilty)

The controversial artwork by Finnish artist Jani Leinonen was borrowed from Zetterberg Gallery last year and was due back in late January.

Leinonen's piece had been shown in other countries without complaints. But "McJesus" even suffered fighting Israeli state officials.

Deputy Director Dina Zilber was forced to contest the Minister of Culture Miri Regev after she threatened to defend the museum.

Leinonen wanted his art removed "immediately" – but for another reason. He supports the pro-Palestinian group, boycott, divestment, and sanctions, or BDS, which discourages doing business with the Jewish state.

Tal had previously refused to shut down the statue. He said the museum will not apply to public pressure and promised to defend freedom of expression and "freedom of art."

The mayor's steps to get rid of the statue were also struck by a bourgeois freedom group, the Civil Rights Association, as "capitulation to violence" and a violation of "artistic freedom of speech".