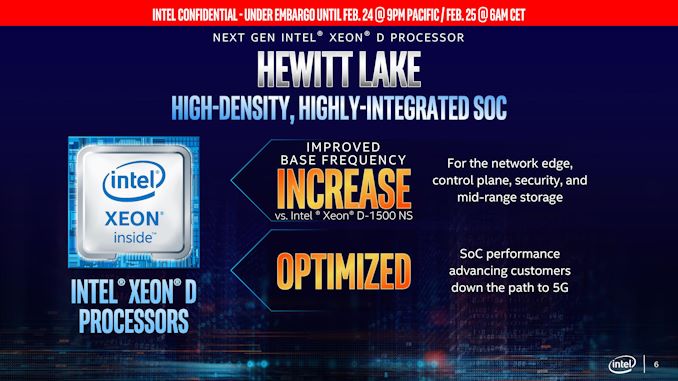 Intel's Xeon D processor line has been a combination of network / micro server processor that increased significantly in previous generation core, power and capacity. We have two divisions – the 500 family of networks and 100 families of higher performance. Today, Intel reveals the name of the successor to the D-1500 family: Hewitt Lake.

Intel does not describe much about the new processor line. At this time, we suspect that they will use the latest Cascade Lake silicon design that provides additional hardware security against specific Specter and Meltdown attacks, VNNI instruction extensions and Optane DC memory support. The large portion of these chips will be in the chipset and there is no obvious indication that Intel is doing anything new at this time.

500 NS processors and are optimized for performance to promote customers down 5G & # 39; road, but fail to explain exactly what it means.

If past reports are something to pass, Intel will launch Cascade Lake in the next few months. Cascade Lake-derived processors, if Hewitt Lake were to be related anyway, are likely to come one or two quarters later.