In Egypt referendum, only turnover seems to doubt 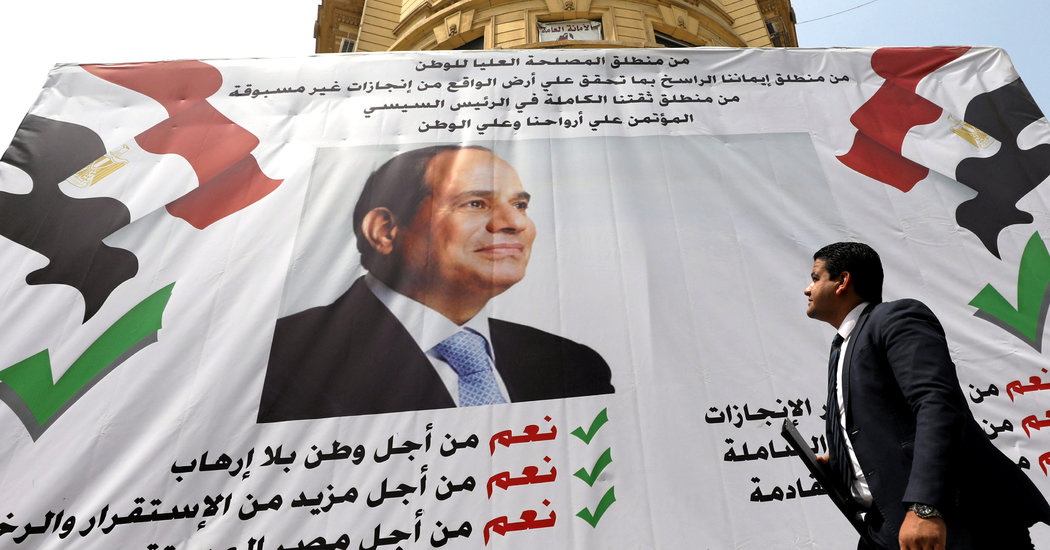 CAIRO – The message shaded from social media, from banners that were too big to miss, and from the upbeat election day songs that played so boisterously to jumbo speakers that they drowned the unstopped killing of Cairo traffic: "Do the right thing. Poll."

On many banners, a green check next to President Abdel Fattah el-Sisi's picture showed the right way to vote. But although not all the messages were explicit, it was clear enough what did the right thing: Vote "yes."

Saturday was the first of three days to vote in an Egyptian referendum on a number of constitutional changes, which, if adopted as expected, will effectively extend Mr el-Sisi's holding power for eight years beyond his current concept until 2030.

They will also extend Mr El-Sisi's authority with the military at the expense of the judiciary and the legislature, the location of the supreme judicial officials under his control and allow him to appoint some members of a new legislative chamber.

The protests in 2011 had originally begun a period of optimism among the Egyptians, hoping for democratic change. But Mohammed Morsi, Egypt's first freely elected president, was overthrown by the military due to fresh protests in 2013. And since then, Mr. El-Sisi brutally argued rejected, imprisoned thousands of opponents and further empowered the security service and military.

Elections have also come to resemble voices from an earlier era.

Like in the landslide, where Mr. El-Sisi won another year last year, the result of this referendum is not hard to predict, although many civil society organizations called on people to vote no, and the Egyptians living abroad published their "no" votes on social media.

The question was less whether the changes would pass, but more about high participation would allow the authorities to throw them as largely popular.

"An election that has more participation is a choice that looks more legitimate," said Mai El-Sadany, legal and legal director of the Tahrir Institute for Middle E ast policy in Washington.

"You see the state, all its devices and its allies working towards both getting people to the streets and getting people to vote" yes "," added El-Sadany. "At the back you see no room for the" no "vote to mobilize."

On Saturday, all signs suggested that the authorities did not leave a high progress for a chance.

On a corner kiosk selling snacks on the eastern Nile, a large banner proclaimed the entrance owner's support for Mr El-Sisi and the constitutional changes. A shop assistant, Mohamed Abdel Aziz, said police had visited and told the owner to put the sign.

Near polling stations in poor neighborhoods, workers distributed cardboard boxes packed with free groceries – usually a mixture of cooking oil, sugar, ghee, lentils or rice – to people who could prove they had voted.

As she walked down the street on her way to the polls in the Rod el-Farag neighborhood, Neama, a four-child widow, said she hadn't known what the referendum was about, but planned to vote to get the subsidy box.

It was much the same with other women interviewed near the polling stations on Saturday: They knew a little about the measures, they said, but the promised benefits were too good to pass on. Most voters interviewed on Saturday refused to give their names, nervous about the potential consequences of talking to journalists.

Mahmoud el-Sherif, a spokesman for Egypt's national electoral authority, said the authority had not received any reports of electoral offense, but any complaints that were received would be investigated. He rejected the notion that voters were paid to vote as "rumors" and predicted there would be a "big" turnout at voting time.

Some people on social media reported on Saturday that campaigns stationed within polling stations were telling the voters, including some who are illiterate, to vote yes. But Mr. El-Sherif denied these demands.

Like many in Cairo's poorer areas, they were not interviewed to get Mr. el-sisi to extend its expression.

A local businessman known as Abu Halawa hit a dusty side street for a kind of referendum covering it in signs with directions to vote. As polling songs burst from the speakers, people were lined up to collect coupons. If they got coupons labeled after the vote, several people said they could redeem them for as much as 200 Egyptian pounds, less than $ 12.

The referendum started only four days after Egypt's House of Representatives approved the constitutional changes. When the government had muffled criticism of the amendments, many Egyptians heard a little about any other position than to vote for.

Resistance figures were excluded from participating in debates on the changes. The authorities canceled a planned protest a couple of weeks ago referring to national security and then blocked several sites belonging to groups trying to mobilize the opposition. Two Egyptian actors who publicly criticized the amendments were suspended by their union.

It is still clear that the President supports many places from those who say he offers security in a turbulent region. 19659002] "I only vote when Sisi is involved," said Mamdouh Mikhail, a blacksmith who supports the president's economic program, Saturday. "I support Sisi for life."