If you're looking at UCF as a Duke-beating template, you're probably wasting your time. 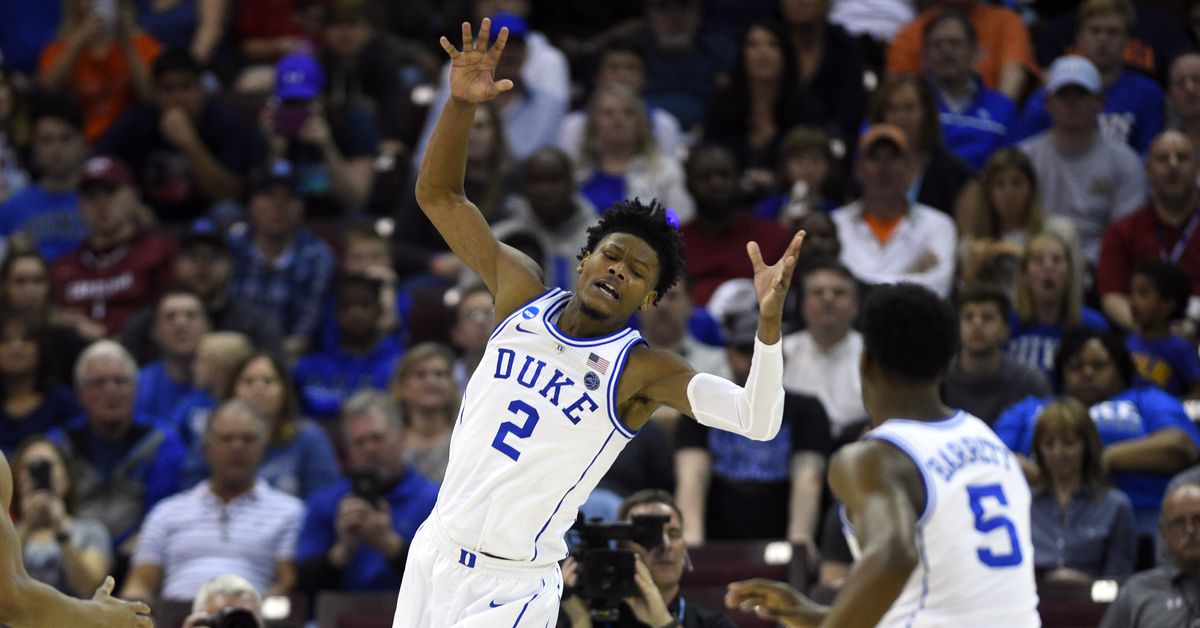 The Monday after the first weekend of March Madness is always unique in the sports media landscape, as after four days with a total of 48 games to analyze, things suddenly go quiet. It leaves columnists and talking heads alike searching for a storyline to keep the casual college basketball fan engaged until the action picks up again on Thursday. And this year, a combination of a lack of Cinderella stories and an instant-classic between Duke and UCF on Sunday has provided that storyline (which is even being discussed on our forums!): Did UCF provide a so-called "blueprint" to beat the Blue Devils?

Proponents of this theory point to two key parts of Golden Knights' game plan that produced the near upset. First, UCFs defense essentially dared Duke to shoot from the perimeter, with a combination of a zone defense and 7-foot-6 Tacko Fall guarding the rim. The strategy definitely kept UCF in the game, but when you look at things in closer detail it had mixed results. Duke's primary scorers, Zion Williamson, RJ Barrett, and Cam Reddish, actually shot quite well from the perimeter, finishing a combined 8-for-1

4 from beyond the arc. But Duke's point guards, Tre Jones and Jordan Goldwire, struggled, making a combined 2-for-11 threes.

Second, UCF shot (and made) a lot of threes themselves, finishing 9-for-18 from beyond the arc (including an incredible 5-for-7 performance from Aubrey Dawkins). The thought here is that if Duke is going to struggle from the perimeter, you can conceivably trade 2s for 3s with the Blue Devils in critical stretches to gain a lead. This most definitely contributed to UCF's primary runs during the game, where they were able to open two-possession leads multiple times.

But in order for this to be a "blueprint" to defeat Duke, it has to be replicable by other opponents. And here is a closer analysis revealing that instead of providing a blueprint, UCF just provided an extremely unusual match to the Blue Devils that, combined with the extra motivation field by the Dawkins family and Aubrey's career-defining performance, nearly toppled Duke. 19659005] Take the defensive theory to start. The best way to defend Duke is probably with a zone defense, but most observant fans have since this team lost to Syracuse in January. But Duke has also shown it has a game plan of its own against the typical zone defense that has had success, even without stellar three-point shooting. What's more, no team in America will be able to replicate the challenge presented by Fall at the Basket.

There were further signs that the defensive performance put forth at UCF was an exception rather than the rule. Duke has almost 15 free throws per game on the season, and the offensive game plan on Sunday is clearly involved in the raid to the line once again (with the added bonus of getting fall in foul trouble). But despite that, Duke only attempted 12 free throws all the game against the Golden Knights (for those looking to complain about the referees, UCF had 20 attempts themselves). While playing defense without fouling would most certainly be part of the "blueprint" to beat Duke, so it is just a general principle of good defense, and it is very unlikely that the average referees are going to let as much go as they did on Sunday

What about the offensive side of the so-called blueprint? Duke actually is one of the best teams to defend three point shots in the nation, with opponents averaging under 30% shooting from beyond the arc this season. With the exception of some early game defensive lapses, most of the threes that Dawkins and the Golden Knights made were contested shots. Quite simply, UCF's 50% shooting from beyond the arc was more of a function of Dawkins playing the game of his life than any particular offensive game plan.

So, for those still looking for the blueprint to beat Duke presented by UCF , I'd argue it's following: put a 7-foot-6 giant underneath the rim, make sure that chance is on your side and almost all of the "50-50" whistles go your way, and somehow ensure that your team beats the law of averages and shoots the lights out against a fantastic perimeter defense. There is no other Tacko Fall lingering in the Sweet 16, and the rest of that blueprint relies more on chance than skill or coaching.

Now, no way does that mean Duke cannot be beaten; indeed, the chalkiness of this year's tournament means that the Blue Devils' road to a national championship is going to be as hard as any in recent memory. What it means is this: the calculus involved in beating Duke hasn't changed because of one anomalous performance. Just like it has all season, beating this team will require the opposition's players to almost uniformly put on an A-plus performance, and even then the likely will require some luck (in the form of injuries, foul trouble, etc.) on the opponent's side. Duke's standing as the favorite to win this tournament has (or, more accurately, not) changed as a result of a uniquely bad matchup with a UCF team that now wants to see in the second round.