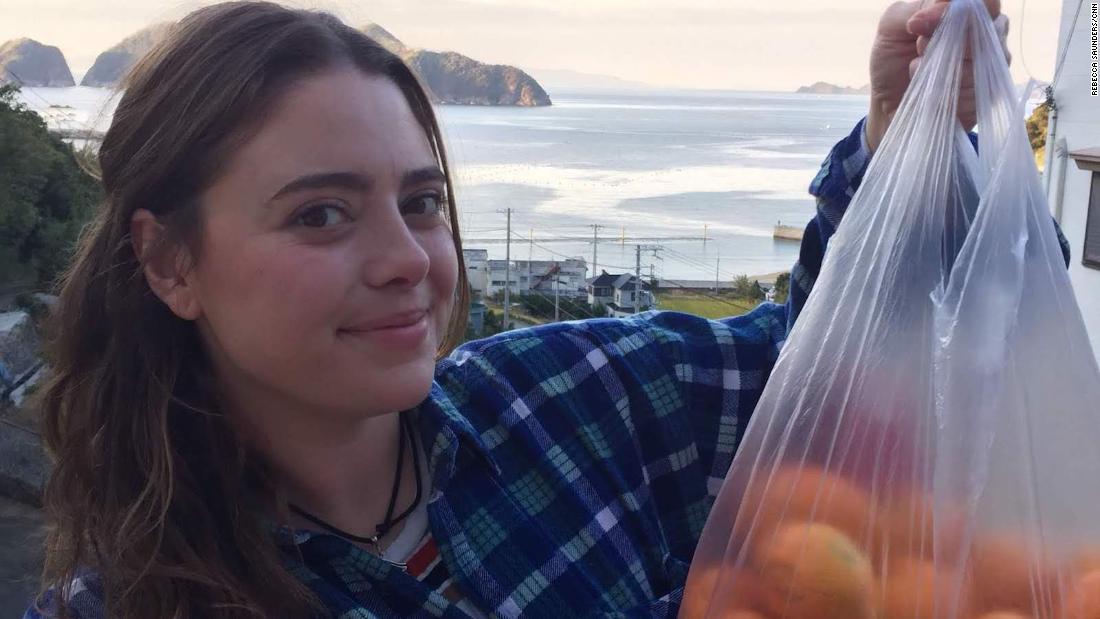 She was standing by my front door folded under a small umbrella in the rain one Wednesday afternoon. I was in the middle of eating my lunch.

I had not seen him.

She looked around as if he could show up and then left to join a group of people again. They continued up the mountain in search of the farmer, whom they eventually found.

Although the meeting was short, it was the moment I realized that I was in a very remote community and had somehow become a small part of it.

Ena is a small fishing village in Wakayama Prefecture, Japan.

It was September 2018 when I moved to Japan and made myself a home there, deep inside the Japanese landscape on the Kii Peninsula.

I never thought it would be so isolating to live somewhere so beautiful, but that was life in Ena.

This small fishing village is surrounded by mountains on all sides except the sea and faces a single lonely island. There is only one shop – a shop that sells fishing gear, snacks and sake. Enas single café only opens on sunny days and closes at sunset.

Farmers grow oranges in the hills or tend to crop in terraced fields.

As a foreign outsider, I stood out. Cars would slow down, their residents would look at me as I walked to the store, the locals wondered what in the world I was doing there.

I had flown from London to Tokyo and spent two weeks soaking up the energy from the Japanese capital before reaching out to my friend Manami, whom I met while backpacking around Japan a few years earlier and told her I was looking for a place to stay.

“You can stay in my cottage,” she announced in response.

It was a relief – I burned my budget in hotels in the city and needed a base from which to start my life in Japan; a home address is crucial for various bureaucratic reasons. In the meantime, I also had written deadlines to meet.

Three days later I was on the ball train to Osaka, whizzing down the country, scared and agitated.

If Tokyo had felt far away from home in the UK, a small fishing village would certainly feel like I had completely slipped into another dimension.

From Osaka, I took a local train out of town. Then another, even more local train. With my large suitcase and bag of snacks, I felt distant from the groups of children in their neat uniforms that drove the train home from school.

As the train drove into a deserted landscape station, I thought, “What am I doing?”

The sea and the island

Manami was waiting for me as I left the train. It was a relief to see a familiar face.

As she drove, the road turned over a mountain and our destination appeared on the other side: Ena.

This is not a place foreign visitors go – not many Japanese visit either.

Fishing towns are slowly becoming a relic of the past, local youth more interested in big city life than following in their parents’ footsteps.

One of Enas’ few accommodation options.

The house I moved into actually consisted of two buildings.

Manami had bought a traditional Japanese house and then built a modern cottage next door. The property is located on the slope of a mountain and offers a breathtaking view of the sea.

I sat staring through the sliding doors in the dark form of Kuroshima, the island offshore, and the boats slowly pushed past in the distance.

I had a view of life throughout the village. But somehow I found myself even more isolated up here.

The next day, Manami took me to the village post office to set up a bank account and register my new address. Then she left.

I was alone. The sun was starting to set and wine was needed to celebrate my new home.

I walked down the hill, about 10 minutes, to the little village shop. The shelves were thinly fitted. The shopkeeper who showed up from his living room was surprised to see me but undisturbed.

“Welcome,” she said in Japanese, where her thick accent differs from those I had heard in Tokyo. She was chatting when I tried to pay for my drink.

I quickly realized that I did not know enough Japanese. I had no idea what she was saying – maybe something about the weather. I smiled and apologized for my terrible lack of language as I walked.

The next problem was food. Luckily, technology had found its way to this Japanese fishing village and I was able to order grocery delivery online.

Friday was a great day: my food arrived. I was out on the patio and could see the truck parked below. The driver seemed confused by the directions.

“It’s for Miss Foreigner, up the hill!” shouted an elderly neighbor who had come out of her house below and pointed at me.

The people of the village

Life unfolds in Ena, as it would have done for decades, possibly centuries.

For me, the morning started on my futon (there was no bed). I looked out of the porthole in the wall above my head to see the island sitting as it always did in the distance, fishing boats already busy, orange farmers slipping past in mini “kei” trucks on their way up the mountain.

I ate oranges for breakfast, drank tea and stared out the screen door of the old house. On a good day, the sea below shone in the sun, but when the rain came, clouds over land and the sea disappeared.

Sometimes, when I was out hanging laundry or returning from a walk, the women harvesting oranges stopped their truck and insisted that I take some. Most days I would see my friendly neighbor at the bottom of the hill sitting on her front step, knife in hand and cleaning a fish.

All creatures large and small

Ena was also home to wildlife. A lot of wildlife. It was the end of summer, but the temperature was still warm and the insects were still in full swing.

Large golden orb-web spiders hung over the windows – I did not mind it because they stayed outside – but the huge hunter spiders did not. I was not happy to have these roommates. At all.

Then there were the prayers I had never seen in real life before I moved to Ena. I quickly got used to their fun ways; one even landed on my shoulder while I was cooking.

The author holds one of the many bags of oranges that Enas farmers have given her.

Small green frogs living in the rice fields filled the night air with their chorus, while the mukad (large, poisonous millipedes) were not to be messed with.

Larger animals also armed near. Living on the mountainside, wild boars came so close that I could hear them sniffing around. I was told that bears also lived in the area.

At one point, I learned that a typhoon was about to hit the village. Manami called to offer advice: I needed supplies, a radio and torch in case the electricity went out.

The typhoon came at night after a heavy day with strong seas and strong winds. I bunkered down, shutters closed, the news on TV repeated warnings of landslides and floods. When I was on a hill, I was especially worried about a landslide. That night I drank guilt as the storm rattled in the house like a ship at sea.

I woke up to calm down. The morning sun was shining and the village was quiet.

The author’s neighbor boys a fish outside her Ena home.

But the typhoon had made itself known. The beach was completely transformed, transformed by high waves; large rocks had completely bent metal barriers around the sand. The property had been damaged. The shopkeeper asked if I was feeling well; We had an uneven conversation about how strong the wind was.

And then two weeks later, allowing me to experience all the extremes of Japan, there was an earthquake. I was standing in the modern house when the ground started to rumble – then it really started to shake.

The earthquake alarm on my phone penetrated my fears and warned “Earthquake! Earthquake!” in Japanese. I saw fishing boats rushing back to shore in case of a tsunami. Not sure what to do, I hid in the bathroom, the floor shifting side by side.

The deep shaking stopped, but my heart kept beating.

After the typhoon and the earthquake, things seemed to settle down until the day of the matsuri (festival). The main street was busy, filled with everyone from the village; old and young had turned out to see the event.

The local Shinto shrine was brought down and paraded on the shoulders of all the young men in the area.

During an Ena matsuri (festival), men parade a Shinto shrine through the streets.

There was a scent of alcohol in the air as the men staggered and threw down the sanctuary. They marched around with it, loaded themselves against wooden scaffolding and threw it into the air, a ritual apparently intended to entertain the god inside.

After a great effort, it was time for a lion dance and music from the local school children.

A young couple came to chat with me. “Why do you want to live here?” they asked. “There’s nothing here!”

It is not as difficult to live in a village as Ena.

But while there are a handful of minshuku (Japanese-style hotels) in these small villages, you probably won’t find them online; Rentals and AirBnbs in these more remote corners of Japan are more common.

Japanese city dwellers like to take a break in the countryside and often buy cottages for use, like Manami’s “cottage”.

Searching the Internet on sites like Airbnb and VRBO is easy. Talk to the owners, read reviews, and get a feel for the place before you arrive. Villages in the Japanese countryside are desperate for more people to live there or even visit.

Despite its ease, few overseas visitors ever reach Ena or similar villages. It’s a scary perspective: English is not spoken much, it’s hard to get around, and there are none of the great cultural drawings of historical hubs like Kyoto and Kanazawa.

Living in Ena was never part of my plan, but I’m glad I did. I look back on my two months there and can not believe that I managed to live in such a remote place, cut off from modern conveniences.

After the storms, the earthquake, the wildlife, I feel ready for other challenges.

But the village and its black island will always be etched in my memory.

Top image: A view of Ena from the author’s home.