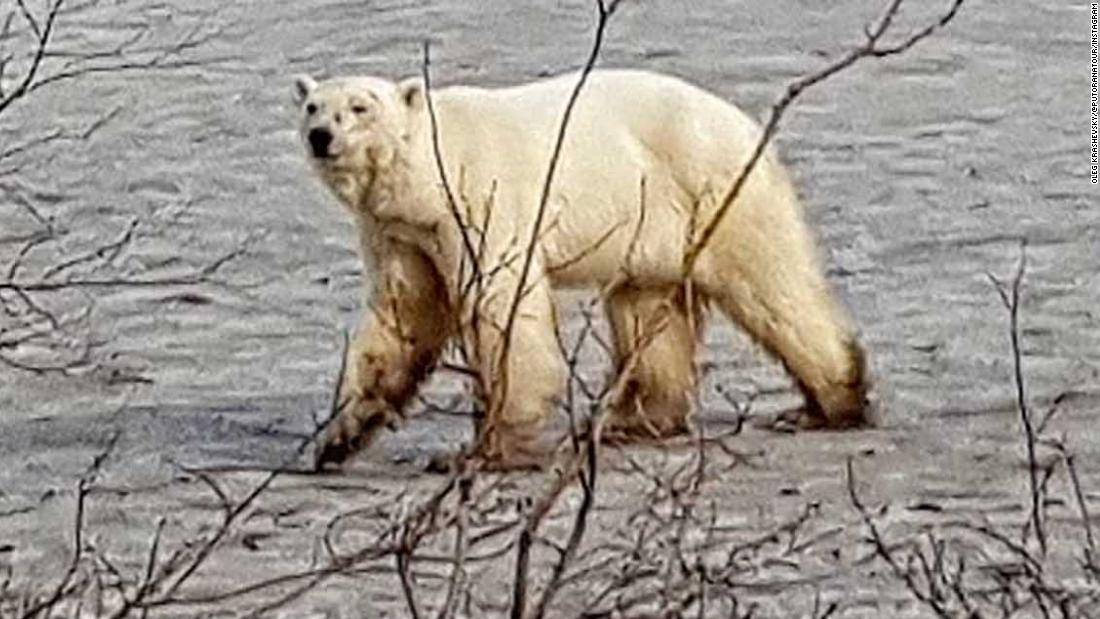 This is just the latest recent observation of a bear in a Russian urban area, but last time a polar bear seemed close to Norislk was more than 40 years ago, Anatoly Nikolaichuk, head of the Taimyr Department of State Forest Control Agency, told Russian state news agency TASS.

"He is very hungry, very thin and emaciated. He walks around looking for food. He is almost unaware of people and cars," says Oleg Krashevsky, a local wildlife expert who filmed the animal close, CNN. "He is quite young and may have lost his mother."

"He probably lost orientation and went south," added Krashevsky. "Polar bears live on the coast, which is more than 500 kilometers away from us. How he came to Norilsk is not clear."

Sea ice across the Arctic is rapidly withdrawing due to climate change, forcing bears to travel to find food.

Local residents were warned to be cautious about entering the tundra area of ​​the Talnakh region, where the bear was seen, according to a local civil defense and emergency ministry at TASS.

The animal was first seen by a group of teenagers who filmed it and sent the video to Instagram, Krashevsky said.

"I saw it was not fake and raised the issue with local authorities," he said. "As an expert on bears, I went to look for him … I found him in the middle of the day."

Local news site NGS24.RU on Wednesday quoted Andrei Korobkin, head of the state wildlife protection department, saying that experts would be arriving from Krasnoyarsk to investigate the bear and determine possible symptoms of exhaustion or physical trauma.

The specialists will bring along provisions as well as medicines to restore the bears health, NGS24.RU reported.

Polar bears are on the international red list of endangered species and in the Red Book of Russia of endangered species. Citing experts told TASS that there are 22,000 to 31,000 polar bears in the world. In the northern part of Krasnoyarsk, a large administrative region of Siberia, the bears are located on the coast and the islands of the Arctic sea, the agency added.

In April, a starving polar bear was discovered in the village of Tilichiki in the far eastern Kamchatka peninsula, also hundreds of miles from its usual habitat.

In February, the remote Russian archipelago Novaya Zemlaya declared an emergency over which local authorities were described as an "invasion" of dozens of hungry animals.