How much will the Moon plan cost? We should know in two weeks 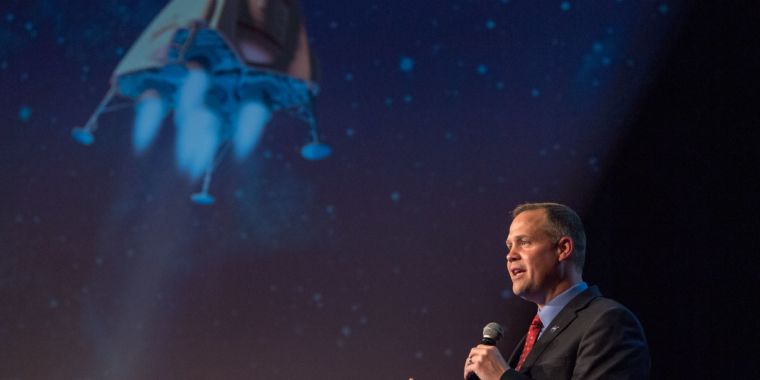 A little more than three weeks passed since Vice President Mike Pence tasked with NASA Administrator Jim Bridenstine with returning humans to the Moon by 2024. Since then, the Oklahoma has been hot-shooting around the country to build support — testifying before Congress, huddling with White House budget officials, speaking at major space conferences, and, this past weekend, visiting his alma mater, Rice University.

During the visit to Houston Saturday, Ars with with Bridenstine to talk about these efforts. We discuss his biggest concern at present, which is building political momentum to fund the plan. This involves developing an amendment to President Trump's Budget Request for fiscal year 2020, which will seek additional funding for the accelerated Moon program. Realistically, Bridenstine said, this amendment will be ready "by the end of the month."

This is a critical document, as the White House will only have one chance to get this request right after NASA is to have a realistic chance of making the 2024 goal. To start funding lunar lander development, design new spaces, and make related plans, this new funding must arrive at the start of the fiscal year on October 1

, and Bridenstine realizes this will only happen with a broad political consensus.

Here is some of our conversation, lightly edited for clarity:

Q. Why should we have confidence that a goal like 2024 is realistic? NASA was only last month that it could not do this before 2028.

A. I would say, technologically, it's realistic. It's not easy. There is a lot of schedule risk, programmatic risk, and technical risk. And so it's not easy, but it's doable. I think the bigger risk, that has to be retired earlier, is the political risk. How do we get the money? And so we have to make sure that, as much as possible, we're driving bipartisan, apolitical decisions and processes into the matrix. You've probably heard me talk about this before, but we can't get one part of the agency to feed another part of the agency. We can't cut off the Science Mission Directorate to feed human exploration. We can't feed the Moon mission to the International Space Station. So if we go in those directions, which have been tried in the past, it never works politically. We can't do the same thing again and be upset that it didn't work. So we actually have to try something different. We have to consider another way of funding this. We're working with the Office of Management and Budget and the National Space Council to come up with different alternatives to get the resources necessary to achieve it.

Q. I'm less concerned about the Office of Management and Budget than about Democrats in Congress. Dating back to Walter Mondale, some Democrats in Congress have generally lost large space projects, arguing that money could be better spent on domestic problems. Some have already raised questions about this being a Trump vanity project.

A. From my experience as the NASA administrator, I have found strong bipartisan support for what NASA is doing. We have seen that even with the omnibus spending package that was passed in a few months ago; we saw it with the omnibus before that. The president's budget request always intends to increase the NASA budget, and even before we can advocate for, Congress has already plused us up to a higher number. We have seen this strong bipartisan support. In order to achieve the 2024 Moon landing, we are going to need a bigger budget. And that absolutely has to go through a bipartisan process in Congress. What I have found is that it's not just partisan. It's parochial. We have 10 centers across the nation. If one of those centers, if a Senator or a Congressman feels like their center is not getting a fair share, then they oppose what we're trying to achieve. So we have to look at this holistically. The vice president said very clearly to achieve the first woman on the Moon, in 2024, by any means necessary. And any means necessary for building a coalition of support that would include bipartisanship. That's what we intend to start working on right away. In fact, we're putting together the budget amendment to send to Congress. If it is not a budget request, it will be dead on arrival. We all know that

Part of the "bipartisan" approach will involve both rocket and orion spacecraft space launch, as well as private rockets. Ideally, Bridenstine said, the build up to the Moon will involve three flights of the SLS rocket. The first one, in 2020, will fly an uncrewed Orion spacecraft around the Moon; the second, in 2022, will fly a crewed mission around the Moon; the third, in 2024, will carry a crew to lunar orbit, inside Orion, to set up a landing.

In the meantime, using private rockets, NASA will construct a small "Gateway" near the Moon. To accomplish this, NASA will launch a "power and propulsion" element to launch space and later a small "habitat module" to form the "early" Lunar Gateway. NASA also needs to pre-position the lunar lander at the Gateway by 2024, and this may be delivered to the gateway by commercial rockets, too.

This lander could comprise three parts: a "transfer" vehicle (to get from the Gateway's orbit to low lunar orbit); a "descent" module to carry the crew down to the surface; and an "ascent" vehicle to get them back up from the surface to the waiting transfer vehicle, which would fly the crew back to the gateway. From there, the astronauts would return home in the Orion spacecraft

During the interview, Bridenstine addressed these countries plans, as well as his relationship with William Gerstenmaier, the senior US spaceflight manager at NASA. It is Gerstenmaier who will sign off on design plans and schedules for getting humans back to the Moon.

Q. Is NASA's design decision on a three-stage lander firm?

A. The aperture right now is wide open. We're not necessarily set on three separate stages. If somebody can do it with two, we're interested in that. We're not ruling anything out.

Q. When you first released the Broad Agency Announcements (BAA) in February, they were pretty specific to that architecture.

A. We have three BAAs now. One is a transfer vehicle. One is a descent module. One is an ascent module. But if people want to share with us ideas that don't fit within one of those categories, we are definitely going to take a look at it.

Q. You're going to have to pick a design pretty soon, right? This year?

A. Oh, yeah, absolutely. We're going to be moving as fast as we can.

Q. How is your relationship with Gerstenmaier? You refer him to a lot in your speeches, teasing him a bit. This seems like it's in good fun.

A. We have a good relationship. He's an engineer's engineer. He's got a lot of respect throughout the community. People trust his judgment on things that are most important. He's got a long history of development programs at NASA. I tease him because I like him.

Q. If he opposed this, he could also sort of slow play you, run out the clock. Do you sense that he is on board with the Moon 2024 plan?

A. Absolutely. He is absolutely on board with accelerating, he's doing everything he can to make it go faster. And it's working.

For Bridenstine, this race won't end soon. Late this week, he'll receive a briefing on a study that will assess whether NASA can continue with the SLS rocket's first launch without performing a "Green Run" test firing at Stennis Space Center. This could cut six months from the development schedule, but the agency would be proceeding to launch without an all-round firing of the core internship, with its four main engines. This would probably be the safety margin for the schedule, but the agency most likely will decide this is the risk if it keeps the lunar program on track