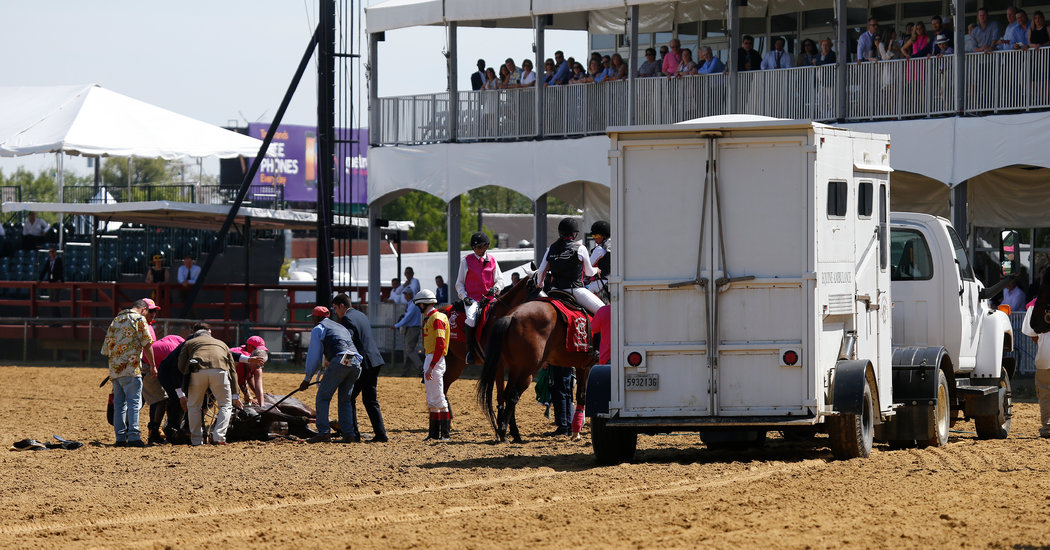 BALTIMORE – Two horses died at racetracks owned by the Stronach Group on Friday, keeping the issue of animal cruelty in horse racing in the public eye on the one of the biggest days in horse racing.

In Baltimore on Friday, on the eve of the 144th running of the Preakness Stakes, the second race of the Triple Crown series, a 3-year-old filly named Congrats Gal died soon after pulling up and finishing last in the nine-horse field in the Miss Preakness Stakes

At Santa Anita Park in Southern California, a 3-year-old gelding named Commander Coil became the 24th fatality at the racetrack since Dec. 26, the events that have already been suspended at the legendary track twice and threatened to close the sport in the state forever.

"Congratulations Gal suffered sudden death after the eighth race today," the Stronach Group, which owns Pimlico, said in a statement, without giving a cause of death. “The incident occurred after the wire. Commission veterinarians attended to the horse immediately. Our thoughts go to all of the owners, trainers and connections of Congrats Gal. ”

There was no immediate explanation for the death of Commander Coil.

Nearly 10 horses a week, on average, died at American racetracks 2018, according to the Jockey Club's Equine Injury Database. That fatality rate is anywhere from two and a half to five times greater than most of the racing world.

Outside the United States, medications for racehorses are strictly regulated, according to the Jockey Club, among the oldest and most influential organizations in the sport. Cracking down on drugs is essential, said advocates for the overhaul of regulations in the United States, because the drugs allow horses to run unnaturally fast and mask pain, which can lead to breakdowns. [1965] Kathy Guillermo, senior vice president of People for The Ethical Treatment of Animals, which had put pressure on California racetracks and regulators to introduce drastic changes, criticized the Stronach Group on Friday, saying the company was dragging its feet at the expense of the animals that make the sport.

sickening collapse and sudden death of Congrats Gal at Pimlico today are proof that the Maryland racing industry has not done enough to protect horses, ”she said in a statement. “PETA will be calling for a formal investigation, including a necropsy and blood toxicology panel, and for the release of all medication and veterinary records. We will contact the district attorney's office, as we did in California, where the D.A. has appointed a task force to investigate training and veterinary practices. ”

The deaths at Santa Anita have promptly investigated at the Los Angeles County District Attorney's Office; Dianne Feinstein; and calls to shut down the sport altogether. In California, 600,000 signatures could be called a ballot initiative supporting a ban.

The sport's standing in the public eye became more tenuous in the 145th running of the Kentucky Derby two weeks ago when the colt Maximum Security crossed the finish line first in America's Greatest race, only to be disqualified for interfering with his rivals and nearly causing a pileup.

Maximum Security, with Luis Saez aborted, led almost every step of the way, but officials disqualified the horse and declared the runner-up, Country House, the champion. They placed Maximum Security 17th because of the sloppy Churchill Downs track. He was the first apparent winner ever disqualified because of a foul on the track

Maximum Security's owners, Gary and Mary West, have sued the Kentucky Horse Racing Commission in federal court to overturn the decision. Saez, Maximum Security's jockey, was suspended for 15 days for careless riding. The horse is not entered in the Preakness. Nor is Country House.