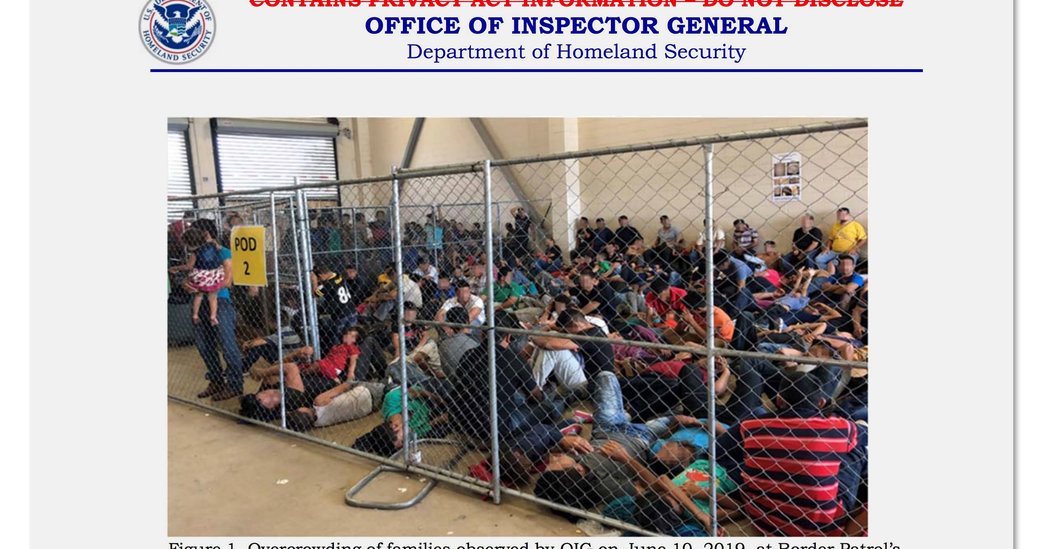 The results of the Department of Homeland Security Inspector's Office were released as House Democrats detailed their own achievements at migrant holding centers and pushed the agency to answer for abuse not only migrants but also their own counterparts threatened by social media .

[ Read the report from the inspector's general office. ]

In June, inspectors from the department visited five facilities in the Rio Grande Valley in Texas, and they found children had few extra clothes and no laundry room. Many immigrants only got wet wipes to clean themselves and the bologna sandwich to eat, causing constipation and other health issues, the report said. Children on two of the five rooms in the area were not given hot meals before the inspectors arrived.

Overcrowding was so severe that when the agency's internal inspectors visited some of the facilities, immigrants hit cells and pressed notes to the windows and asked for help.

The report brought the democratic legislature's decision to press for responses from the Customs and Border Protection Agency, even when they continued to struggle with each other emergency bill last week without the strict conditions of liberal and Spanish members required. Their sense of urgency was further enhanced after ProPublica erupted a secret Facebook group for current and former border patrols, presenting jokes about the deaths and threats of immigrants to members of the Congress.

"The inspector's general report gives a shocking window into dangerous and dehumanizing conditions that Trump administration imposes on children and families at the border," said President Nancy Pelosi in a statement. "This report is even more troubled after the discovery of the evil, outrageous comments made on social media by some of them in CBP responsible for the care of immigrant families and children."

"The Inhumanity at the Border is a challenge for conscience in America, "she added.

After touring a facility in Clint, Tex, where a group of lawyers had reported that children had gone rude and unwashed, Democratic lawmakers said they had met migrants who did not get fresh water and were forced to drinks from toilets.

On a number of tweets on Tuesday, one of the Democrats, representative of Alexandria Ocasio -Cortez in New York, who was the target of some of the more offensive posts in the Facebook group, described Customs and Border Protection as a "bad agency. "

Representative Elijah E. Cummings of Maryland, President of Parliament The Supervisory and Reform Committee called on Tuesday that the acting Secretary of Homeland Security, Kevin K. McAleenan, and newly appointed Acting Customs and Border Protection Commissioner, Mark Morgan, came to Capitol Hill to the di scuss Facebook group and the statements in the report.

"There seems to be open contempt for the rule of law and for basic human decency," Cummings said. "The committee needs to hear directly from the leaders of these agencies as soon as possible in the light of the almost daily reports of abuse and reluctance."

According to the report, the details of which were first reported by BuzzFeed News, 826 of the 2,669 children detained at the facilities were held for longer than 72 hours in violation of a federal court decision and customs and border protection policy. Chief executives raised security issues at the facilities and called the situation "a ticking bomb," the report said. Photos published in the report show crowds of immigrants packed in cells that pressed their hands on the windows. A migrant held a cardboard entry, "Help."

Some immigrants clogged their toilets with blankets and stockings to be released from the overcrowded cells. When some refused to return, Border Patrol brought a special operation team "to use force if needed."

"Prisoners have also attempted to escape while they were removed from their cells during maintenance," the report said.

While senior home security officials have been alerting for a record number of Central American families crossing the southwestern border for months, officials in recent weeks have disputed the descriptions of the conditions for detained immigrants. Mr. McAleenan told last week the accusations at the Clint facility as "usubstantiated" and called it "clean and well managed".

But the government's own report supported the Democrats' descriptions. The facilities were built for the short-term stay of adults who are expected to be quickly deported. Central American children who, according to immigration law, cannot immediately be expelled to their country of origin, must be moved to facilities managed by the Department of Health and Human Rights within 72 hours. Single adults must be moved to facilities built for long-term detention, managed by immigration and customs enforcement.

But officials in the home security officials have said that other facilities are also full. To discourage migration to the border, the department recently threatened to launch nationwide assault to postpone unconscious families, as President Trump said, starting after July 4.

An ICE spokesman also said on Tuesday that the agency issued hundreds of thousands of dollars to unauthorized immigrants who refused to comply with expulsion orders.

The agency started sending the messages with fines up to $ 799 per. day in december. On Tuesday NPR reported that a woman was sent a fine of nearly $ 500,000.

Among the border sectors, the Rio Grande Valley has seen some of the biggest migration increases, according to senior officials. The agency has built tent camps in the area to keep hundreds of asylum seekers and this year began flying unprocessed migrants to more space facilities in San Diego.

Last week, customs and border protection journalists gave a rare trip to detention facilities in McAllen, Tex., Where immigrants of all ages were kept in chain link fences, lying on worn exercise mats and snacking on sandwiches.

The stack of shelves within the "la hielera" or icebox as migrants generally call the plant for its humid temperatures, became diapers, baby napkins, formulas and other materials used by the authorities to care for the migrants. Two medical teams operate out of the facility and screen the migrants as they arrive after being arrested by border patrol agents.

"This is a kind of grounding for us," said Carmen Qualia, acting lawyer of law enforcement operations programs of the border patrol Rio Grande Valley sector.

But the inspector's general report was asked if the department did enough for the children.

At a press conference on Tuesday, doctors in Texas who were caring for children released from the facilities said they were surprised that more had not died. At least six immigrant children have died in federal custody or shortly after they were released since September.

They described children with life-saving medicine taken away, or released with severe disorders, but without medical records from the time they were detained. A doctor related the story of a young mother who described how difficult it was to keep her newborn baby in custody.

"This baby had got a new onesie and given a plastic blanket, and despite his best efforts, her little-born fingers and toes were still blue," said Dr. Lisa Ayoub-Rodriguez, a pediatrician in El Paso.

Robert E. Perez, Deputy Commissioner for Customs and Border Protection, said he was "very safe" his agents supplying freshwater, food and hygiene products to migrants in Border Patrol Custody. His agents are overwhelmed, he said, because of a record number of families crossing the border who have filled facilities built for short-term detention.

"We take every allegation of misdemeanor incredibly seriously," Perez told CNN. "And there will be consequences for those who do not comply with our behavioral requirements."

Amanda Gorman says she was racistly profiled by the security guard