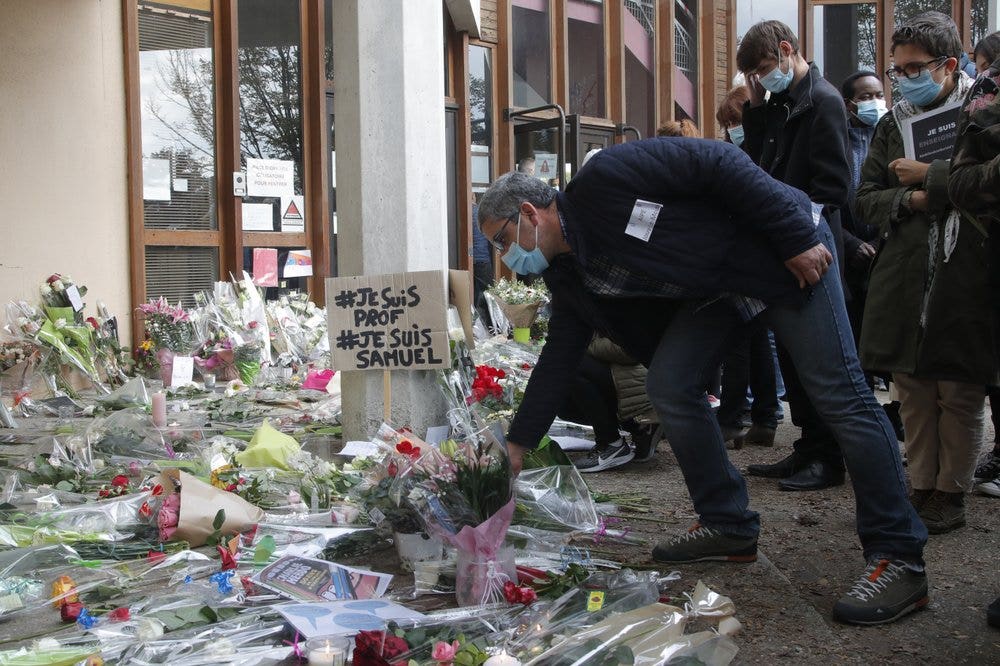 French officials plan to deport 231 radicalized foreign nationals in a violent breakdown following the brutal killing of a teacher on Friday.

Interior Minister Gérald Darmanin said he intends to move quickly in response to the killing of Samuel Paty, a history teacher who was beheaded after showing cartoons of the Prophet Mohammad in class.

The primary response to the attack includes the deportation of 231 aliens in the File of Alarm for the Prevention of Terrorist Attacks (FSPRT), which tracks radicalized activities according to Europe 1.

French President Emmanuel Macron flanked by French Interior Minister Gerald Darmanin, second left, speaks in front of a high school on Friday, October 16, 2020 in Conflans Sainte-Honorine, northwest of Paris, after a history teacher opened a discussion with high school students at caricatures of the Prophet Muhammad of Islam were beheaded. French President Emmanuel Macron condemned what he called an “Islamist terrorist attack” on a history teacher who was beheaded in a Paris suburb on Friday, urging the nation to stand united against extremism. (Abdulmonam Eassa, pool via AP)

Darmanin had already planned to deport the people after traveling to Morocco the previous week to ask the government to accept nine of its radicalized nationals. He plans to meet with officials in Algeria and Tunisia to discuss similar agreements.

The list includes 180 people currently in jail and a further 51 people who will soon be arrested, officials said. More than 850 illegal immigrants are registered with the FSPRT, 24 News reported.

A man lays a flower outside the school where a killed history teacher worked on Saturday, October 17, 2020 in Conflans-Sainte-Honorine, northwest of Paris. French President Emmanuel Macron condemned what he called an “Islamist terrorist attack” on a history teacher who was beheaded in a Paris suburb on Friday, urging the nation to stand united against extremism. The teacher had discussed caricatures of Islam’s Prophet Muhammad with his class, authorities said. The suspected attacker was shot dead by police after Friday’s beheading. (AP Photo / Michel Euler)

French authorities have already arrested 11 people in connection with the killing, the BBC reported, although it is not clear if they are also part of the planned deportations.

Four close relatives of the suspect were detained shortly after the attack. Six people were detained Saturday, including the father of a student at the school and a preacher who was described by French media as a radical Islamist.

Darmanin also plans to focus on the issue of the right to asylum, as an 18-year-old Chechen refugee, identified only as Abdoulakh A., is suspected of killing Paty. The Minister asked his services to examine more closely people who want to obtain refugee status in France.

The suspect was found a short distance from the victim and carried a knife. After the suspect refused to drop his weapon, police shot him and killed him.

French anti-terrorism prosecutor Jean-Francois Ricard has said a text was found claiming responsibility for the attack and a photograph of the victim was found on the suspect’s phone. A photo of Paty’s neck-headed head was posted on a Twitter account belonging to the suspect.

“I have executed one of the dogs from hell who dared to put Mohammad down,” the message said with the photo, according to authorities.

At all has disturbed moderate French Muslims. On Sunday, political leaders, associations and trade unions are ready to demonstrate in Paris and other major cities to call for support for free speech and tribute to Paty.

A national tribute is paid to Paty on Wednesday.

“A civilization does not kill an innocent person, barbarism does,” Tareq Oubrou, an imam from a mosque in Bordeaux, told France Inter on Saturday.

Election for Ivory Coast: voters go to the polls amid opposition boycott