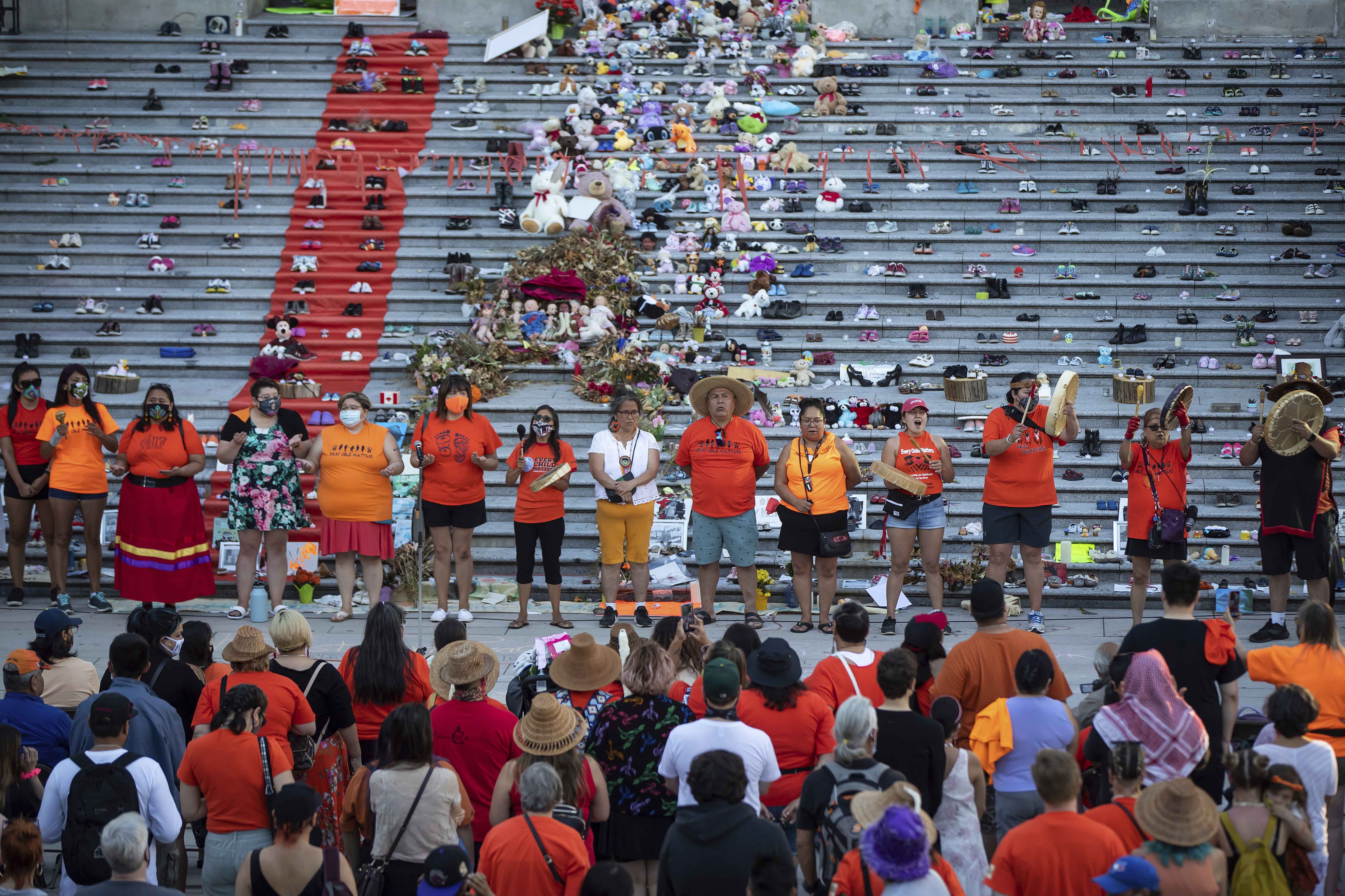 Prime Minister Justin Trudeau issued a statement shortly after the announcement that he is “terribly sad” about the news. “My heart goes out to Cowessess First Nation and to all indigenous communities across Canada,” he said.

The news comes after Tk’emlúps te Secwépemc First Nation announced in May that the remains of 215 children had been found due to the former Kamloops Indian Residential School. Researchers say hundreds of unmarked graves are also believed to be located in Manitoba related to the residential school system in this province.

There has been significant political pressure in recent years on federal party leaders to accept the earlier treatment of indigenous peoples in Canada as genocide, including the nationwide housing school system removing children from their families to enroll them in a system that sought to ” take the Indian out of the child. ”

A 2019 study on missing and murdered indigenous women concluded what happened was genocide.

“This genocide has been empowered by colonial structures, as evidenced in particular by Indian law, the Sixties Scoop, housing schools and human rights abuses and the rights of Inuit, Métis and First Nations, which led directly to the current increased rates of violence, death and suicide in indigenous peoples, ”the report reads.

Following the discovery in Kamloops, Trudeau said earlier this month that he accepted the conclusion of a 2019 investigation that “what happened is tantamount to genocide.”

“The pope must apologize for what happened to the Marieval Indian Residential School impact on Cowessess First Nation survivors and descendants,” said community leader Cadmus Delorme.

“Tombstone removal is a crime in this country,” he said. “We treat this as a crime scene.” Through the oral history with members of the community, Delorme suggested that the tombstones be removed by representatives of the Catholic Church in the 1960s.

Small flags, 751 of them, now dot the site of the former Marieval Indian Residential School, each marking the remains of a corpse. Delorme said both adults and children are believed to be buried in the graves.

Referring to a margin of error of 10 percent with the technology used to identify the remains, Delorme said he can say with certainty that at least 600 people are buried on the site. The first nation will continue its investigation.

The Marieval Indian Residential School opened in 1899 and was run by the Roman Catholic Church until 1979. The school closed in 1996 and was demolished three years later.

It is an institution that once existed in Canada’s nationwide residential school system. The federal government bought the site in the 1920s, according to the University of Regina. In 1949, parents of students at the time tried to restore their rights under Treaty 4 and pressured Ottawa to turn the school into a non-secretarial day school. Their petition was dismissed.

More than 150,000 First Nation, Métis and Inuit students were enrolled in the housing school system, according to the federal government.

Survivors from schoolhouses have previously testified about the existence of unmarked graves at the site of residential schools. Some of these testimonies were documented in a 2015 milestone report with permission from survivors.

The Truth and Reconciliation Commission published its report in 2015, describing the impact of Canada’s residential school system as synonymous with cultural genocide.

TRC commissioners traveled across the country for six years, talking to more than 6,500 people about their experience of housing school and its impact on families and communities.

Their study identified at least 3,200 deaths in residential schools, but commissioners said insufficient records mean the total number of students who died in the system “probably will never ever be fully known.”

Due to poor record keeping, it is difficult to find out what the cause of death was for many students who disappeared at boarding schools. Survivors have said some students admitted to the hospital never returned, inadequate food supply left some children more vulnerable to disease, and others were threatened with death if they reported physical and sexual abuse.

“The most serious gap in information arises as a result of the incomplete documentation,” reads the TRC report. “Many records have simply been destroyed.”

The announcement of the discoveries of mass-marked graves for native children in close order has renewed attention to the Liberal government’s commitment to reconciliation.

Trudeau’s Liberals have been in power since 2015. His government has been criticized for making slow progress in uniting oppression, inequality and trauma between the generations indigenous peoples have experienced – and continue to experience – since the country’s founding.

China, a country facing international pressure over allegations of genocide and crimes against humanity for the treatment of Muslim Uighurs, has attacked Canada, the United Kingdom and the United States over their human rights records.

Trudeau traded barbs with China earlier this week, acknowledging that the “terrible” mistakes of the past are having an impact today. He suggested what sets Canada’s answer apart is recognizing the problem.

“Where is China’s Truth and Reconciliation Commission,” the prime minister said Monday. “Where is their truth?”

In the United States, Home Secretary Deb Haaland announced this week that the federal government is launching a review of boarding schools that, like Canada’s residential school system, tried to force cultural assimilation on indigenous peoples.

Haaland said Tuesday she was “deeply affected” by the discovery of mass graves in Canada.

There are First Nation communities in Canada that do not have access to clean drinking water. Trudeau’s Liberals had fought for a promise to end all long-term advice on boiling water by March 2021.

As of last week, 51 long-term drinking water consultancy services are in place in 32 communities.

Delorme said his community would rather spend their energy on economic sustainability and political sovereignty, but the reality is that resources are being reserved on addressing infrastructure, lack of services and mitigating the effects of intergenerational trauma, addiction and child welfare.

Anyone experiencing distress or pain can call the Indian Residential School Survivors Society Crisis Line, which is open 24 hours a day: (1-866-925-4419).