Fight rages between police and gangs in Caracas 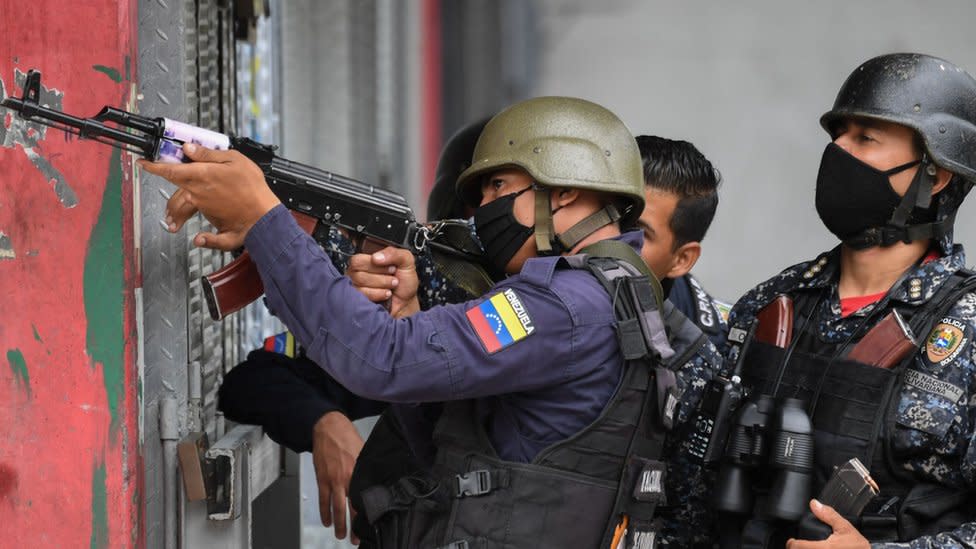 Street fighting has raged between security forces and armed gangs in the Venezuelan capital Caracas.

No official death toll has been released, but local media reports say more than 10 people have been killed since the fighting began on Wednesday.

Hundreds of officers have been deployed to seize weapons and search for band leaders who have been trying to expand their territory.

A local resident said the recent violence was “like a war”.

An officer told the AFP news agency that authorities now had control, but said “there may still be a few snipers”

About 800 security personnel were deployed to affected areas where they conducted house-to-house searches.

Interior Minister Carmen Meléndez said police had “come forward with the dismantling of the criminal structures that have settled in these territories with the intention of sowing terror.”

She said the officers had freed civilians kidnapped by the gangs and would remain deployed “as long as necessary”.

The Venezuelan government has offered rewards of up to $ 500,000 (£ 360,000) for information leading to the detention of gang leaders.

Local human rights groups called for a de-escalation of violence and expressed “deep concern for the lives and safety of local residents”.

While the shot appears to be dead, dozens of civilians have fled their homes, fearing to be hit by bullets.

“We are experiencing trauma,” a Cota 905 resident told the Associated Press.

The operation marks the first time in years that authorities have launched a major offensive against the gangs, reports AFP.

But opposition media said the government was to blame.

An op-ed published by the newspaper El Universal said that the firepower of the powerful El Coqui gang “grew disproportionately, while the state security agencies that exist to confront them and reduce them have seen themselves diminish over the years”.

An editorial by El Nacional said the gangs’ strength was “a result of [the government] after giving these criminals all possible benefits “.

Venezuela has been caught in a downward spiral for years with growing political discontent further driven by hyperinflation, power outages and shortages of food and medicine.

Critics say basic services such as policing, health care and road maintenance have been neglected.