Everyone is "gun-fu" fighting: John Wick 3 is almost as good as the original 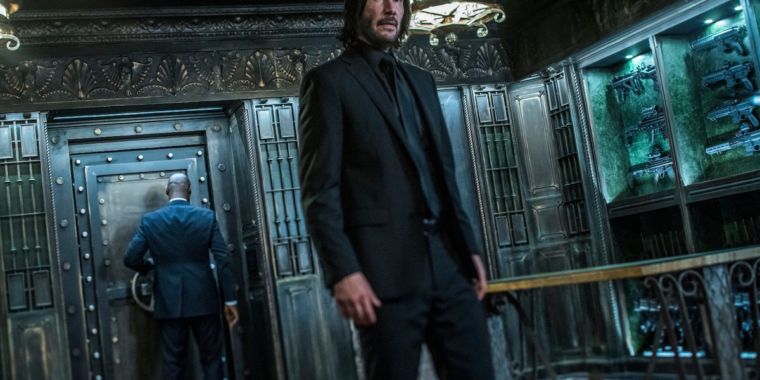 John Wick: Chapter 3 — Parabellum is blowing up the box office this weekend with a projected $ 56.8 million opening. No sequel is likely to match the lean, mean, revenge-filled fury of the original film, but Parabellum comes close. Director Chad Stahelski knows exactly what his audience wants. This third installment advances the assassin's underworld mythology while stringing together a series of spectacularly choreographed fight sequences showing some of the finest stuntwork you're likely to see on the screen.

For those who missed the first two movies, John Wick (Keanu Reeves) is a legendary hitman (known as the "Baba Yaga") who tried to retire when he fell in love and got married. Sorry, he's drawn back into the dark underground world by an act of senseless violence after his wife's death. Nothing will stop John Wick from seeking retribution. The first John Wick grossed more than $ 88 million worldwide for a film worth around $ 30 million, and it was praised for its brisk pace, heart-stopping action sequences, and stylish noir feel.

So naturally, there was a sequel. In John Wick: Chapter Two Wick takes on a whole slew of Russian baddies but finds himself honor-bound (per the professional hitman's code) to go on one last assignment. Of course he succeeds — he's John Wick — but the client, Italian crime lord Santino D'Antonio (Riccardo Scamarcio), tries to cover his tracks by posting a bounty on Wick's head. Wick ends up killing Santino – newly named to the High Table – inside the Continental Hotel in New York, which is supposed to be a safe space for assassins, and is declared "excommunicato," cutting him off from the resources the hitman underground usually provides.

And that's where John Wick: Chapter 3 — Parabellum picks up, with Wick scrambling to find allies (and ammo) to fight off pretty much the entire underworld of assassins, all of them very eager to claim the $ 14 million bounty on his head. The title refers to the old adage, Si vis pacem, para bellum : "If you want peace, prepare for war." Wick has essentially been on the High Table, and the escalation plays out as you would expect when everyone's favorite dog-loving hitman is involved.

Parabellum continues to flesh out details of the inner workings of the High Table and its global network of highly trained assassins — one of the most fascinating aspects of the franchise. Yes, it's a criminal enterprise, but there has always been a strict code of conduct. A high table representative known only as The Adjudicator (Asia Kate Dillon) is intent on enforcing that code, targeting not just wick but anyone who offered him the slightest bit of assistance. That includes Winston (Ian McShane), manager of the Continental Hotel; an underground crime known as the Bowery King (Laurence Fishburne); and The Director (Anjelica Huston), who reluctantly grants Wick safe passage to Casablanca. (The director also reveals a hint of Wick's own mysterious origins.)

Ultimately, it's all about the fight sequences, and on that score, Stahelski really delivers. He's a former stunt choreographer who worked with Reeves on The Matrix movies, after all, and brought all those years of expertise to bear when he blocked out the fight sequences for Parabellum . They're stylish, intense, inventive, and occasionally witty, and Stahelski doesn't limit his repertoire to so-called "Gun-Fu." There are plenty of knives and assorted antique weaponry, numerous styles of martial arts, and a memorable sequence set in a stable where the aid of a horse to deliver some perfectly executed kicks with its hind legs (Horse-Fu!). 19659036] Halle Berry broke three ribs while training for her fight scenes.

My personal favorite was Death By Library Book; I guess it would qualify as "Found Object Fu." Wick wields it in the film's very first fight scene, among the stacks at the New York Public Library, to fend off an assassin played by NBA basketball star Boban Marjanovic. The 7-foot, 3-inch Serbian plays for the Philadelphia Sixers. Stahelski told The Philadelphia Inquirer that he wanted to face off against a lot of opponent in a confined space, but didn't know any seven-foot stuntmen. A producer told him about Marjanovic, a John Wick fan who happily auditioned with the stunt team for a couple of hours to win the role. Wick is the star of course, so the outcome of their face-off is never in doubt. But who knew Bobon's Dante-quoting assassin would be taken out by a 19th-century collection of Russian folk tales?

The near non-stop action meant months of intense training for much of the cast that often got quite rough. Halle Berry, who plays fellow assassin and reluctantly ally Sofia, told late night host Jimmy Fallon she broke three ribs while training for her fight scenes. Those scenes included working with dogs, specifically of the Belgian Malinois wide. Stahelski described them to Vulture as a "leaner, meaner version of a German Shepherd." Clad in doggy Kevlar vests, the canines run point for Sofia during battle, going for an arm, or a jugular, or memorably for the groin whenever a bad dude advances. (Dog-Fu!) Stahelski called it "doggy jujitsu," and duty Vulture that the dogs were trained to think of it all as play.

For those who expected Parabellum would wrap everything up in a nice little bow, the movie ends with one final twist that neatly sets up a possible fourth movie. Why would the studio abandon such a popular and profitable franchise? Poor John Wick will have to wait a bit longer to take that well-deserved break from all the kitten