Eugene Robinson: Trump tried to make Independence Day all about him. He ended up looking small. 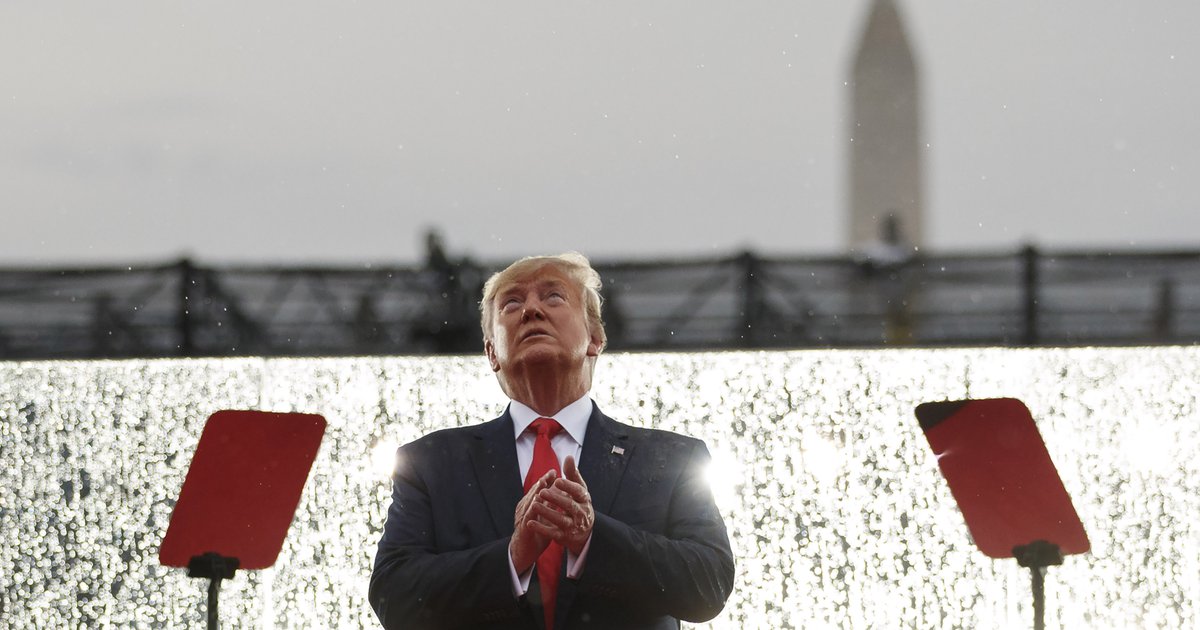 Washington • President Trump chose the wrong backdrop for his attempt to make Independence Day all about himself. Standing beneath the majestic statue of Abraham Lincoln, occupying a space where great orators have stood, Trump looked and sounded quite small

He gave a triumphalist speech, of course. “Our nation is stronger than ever. It is its strongest now, ”Trump claimed. He went on to give extended salutes to each of the nation's armed services, punctuated by flyovers by Coast Guard, Navy, Air Force, Marine Corps and Army aircraft and the singing of the corresponding anthems. Anyone who came to see a military pageant did not go home disappointed. "Trump declared that" we are one people chasing one dream and one magnificent destiny, "but that misses the point. We are, in fact, a nation, bound together not by blood but by our creeds, our institutions and our laws. Trump treats the law like an inconvenience, and annoyance.

Missing, as Trump spoke in Lincoln's shadow, was any sense of humility as a vital aspect of American greatness. But you might have guessed that.

Since he visited French President Emmanuel Macron two years ago and witnessed the Bastille Day parade in Paris, Trump has wanted a big military extravaganza of his own. On Thursday, he got one ̵

1; and, predictably, he put himself smack at the center of it.

All week, reporters and citizen-journalists spotted heavy-duty Defense Department hardware being trucked into town for Trump's martial-themed celebration of "your favorite president, me" – Bradley Fighting Vehicles, M1A2 Abrams tanks, and M88A2 Hercules recovery vehicle. The flyovers included a B-2 stealth bomber, two F-22 Raptors, two V-22 Ospreys, two F / A-18 Super Hornets, two F-35s, one of the plans used as Air Force One, the famed Blue Angels and various other military aircraft. All that was missing was a reviewing stand, like the one on Red Square where grim-faced Soviet leaders used to watch the tanks roll fits.

Oh, wait, there was a reviewing stand of sorts – a closed-off VIP section near the Lincoln Memorial where Republican Party donors and bigwigs could sit up front, basking in the glow of their maximum leader. Democratic Party luminaries were not invited.

That is outrageous, of course, but not surprising. It was clear from the beginning that Independence Day meant nothing more to an opportunity to choreograph a made-for-television reelection event and give himself an obscenely expensive ego massage.

Presidents, as a rule, have treated the Fourth of July with special reverence because they understand that the day belongs to us, not to them. In 1970, at the height of unrest over the Vietnam War, Independence Day was turned into something called "Honor America Day" – an extravaganza staged, like Trump's, at the Lincoln Memorial. President Richard M. Nixon videotaped at speech at the event; Even he had the good sense of attendance in person, instead of his home in California.

That event, billed as apolitical and nonpartisan, turned out to be anything but. Evangelist Billy Graham led off by blasting opponents of the war as "a relatively small extremist element." Raucous, drum-beating protesters came out in force; some of them overturned a Good Humor truck, prompting riot police to move in. A few neo-Nazis showed up for good measure. The smell of gas is hung in the air. Before going onstage, the program's host, Bob Hope's comedian, reportedly surveyed the scene and quipped: "It looks like Vietnam, doesn't it?"

Actually, it looked like an America that didn't care to be told how to think about Independence Day

That's what Thursday looked like, too. Protesters were not allowed to fly the now-famous "baby trump" balloon, so they inflated it and sat it on the mall. MAGA Hats and Trump T-shirts abounded. There were some friction between pro- and anti-Trump revelers, including a letter clash near the White House at the scene of a flag-burning whose organizers had been granted an official permit.

This is the most collective of our holidays, in that it celebrates our common heritage and enterprise, but it is also the most individual. It commemorates not a battle but a document, and each of us gets to decide what the Declaration of Independence means – what patriotism entails, what the flag represents, what the fireworks symbolize. Your view of what the Fourth of July means is every bit as valid as the president's. Mine is, too, and excludes fighters and bombers over the Lincoln Memorial

93% of children qualify for the monthly stimulus check-up