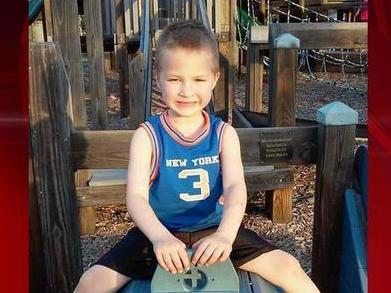 Nearly one year on, police filed charges in relation to the death of a seven-year-old Wisconsin boy who was buried alive in snow as a part of grueling punishment for not being able to recite 13 bible verses. [19659002] The death of Ethan Hauschultz has led to the arrest of three, including a teenager and Ethan's court appointed guardians Timothy Hauschultz and Tina McKeever-Hauschultz.

The Manitowoc County Sheriff's Office also arrested a 15-year-old, who allegedly oversaw Ethan's torture in the hours leading up to his death.

The sheriff's office released the following statement after the arrests: "Ethan had been performing punishment ordered by Timothy which required Ethan to carry a heavy wooden log, weighing approximately two-thirds his body weight. , while being monitored by Timothy's 15-year-old son. ”

“ Over the course of 1-1.5 hours, the 15-year-old hit, kicked, struck and poked Ethan numerous times. He repeatedly shoved Ethan to the ground and rolled the heavy log across Ethan's chest, ”the release continued. “He stood on his body and head while Ethan was face-down in a puddle. He ultimately buried Ethan completely in snow. Timothy and Tina eventually transported Ethan to the hospital where he was pronounced dead.

The 15-year-old has been charged with first-degree reckless homicide and six other charges.

In an interview with police, local media reports the teenager told authorities that he did not do anything that would have cause bodily harm to his Ethan, but he did say that he struck him around 100 times.

He also admitted to burying Ethan “in his own little coffin of snow”.