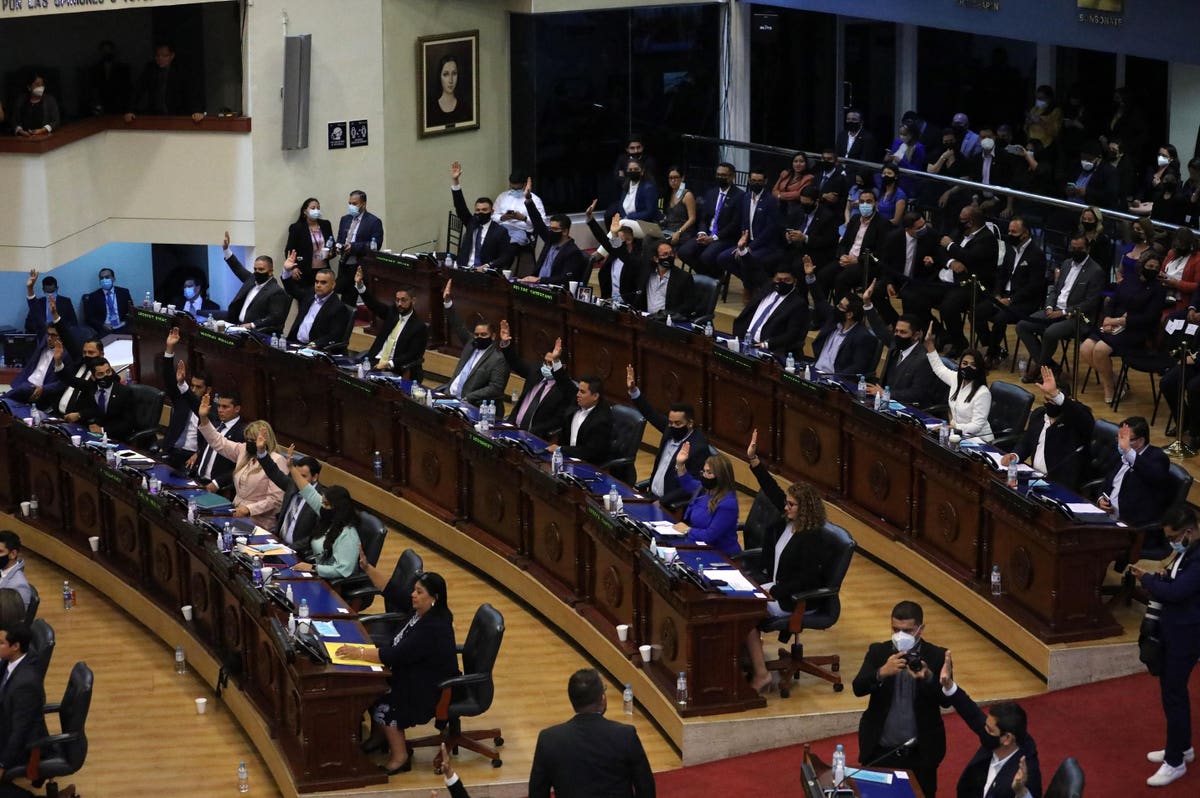 7;s Legislature made history by formally adopting bitcoin as the legal tender, with nearly three-quarters of the legislature voting in favor. If the new law works as intended, it has the potential to turn El Salvador into one of the world’s most important financial centers and influence the way people around the world use digital currencies.

“History!” exclaimed Salvadoran President Nayib Bukele on Twitter after the vote took place around noon. 02.00 east time on 9 June. In fact, the bill is historic on a number of fronts.

How the Salvadoran bitcoin standard works

According to the text of the law, “any economic agent under the new law must accept bitcoin as payment when it is offered to him by the person acquiring a good or service”: a straightforward definition of what it means to be a legal tender. “Tax contributions can be paid in bitcoin” along with all other legal obligations, and “exchanges in bitcoin are not subject to capital gains tax, just like any legal tender.” And “liabilities in many terms expressed in US dollars that existed before the effective date of this law can be paid in bitcoin.”

The US dollar also remains a legal tender in the country and is used as a “reference currency” for accounting purposes.

The bill anticipates many of the practical considerations involved in the adoption of bitcoin as a legal tender.

First, the law creates exceptions for those “who do not have access to the technologies that allow them to perform transactions in bitcoin.” The Salvadoran government will “promote the necessary education and mechanisms so that the population can access bitcoin transactions.”

Second, the Salvadoran government will establish a $ 150 million trust in the El Salvador Development Bank (El Salvador’s Development Bank, or BANDESAL), which exchanges bitcoin, which companies and individuals receive for US dollars at market prices, for those who do not want to hold bitcoin. This way, bitcoin adoption will grow organically in the country, and those who find bitcoin volatility too risky will not have to maintain it on their balance sheet.

“The purpose of the trust fund is not to make money, but to support this decision to have bitcoin as a legal tender,” President Bukele said in a Twitter Spaces conference call hosted by Nic Carter of Castle Island Ventures. “It does not involve the Federal Reserve or even our central bank.”

Third, while Salvadorans are free to use any compatible wallet to interact with the new bitcoin-based monetary system, they will have the option of using an official, government-sanctioned smartphone wallet designed by Jack Mallers’ Strike.

A monetary version of disruptive innovation

The late Harvard Business School professor Clayton Christensen coined the term “disruptive innovation” to describe innovations that stem from “a niche market that may seem uninteresting or irrelevant to start-ups” but ends up redefining an industry. Think of it this way that Japanese low-cost carriers like Honda and Toyota entered the US market with reliable, affordable compact cars with low margins and eventually worked their way up the luxury segment with higher margins with Acura and Lexus. Detroit’s big three ignored and spotted Japanese cars at first, but eventually lost market share and demanded federal rescues to stay afloat.

What El Salvador does with bitcoin follows exactly the same pattern. Many people in the US and Europe mock bitcoin, criticizing its volatility and high transaction costs, believing that the US dollar and the euro work perfectly without the need for alternatives.

El Salvador sees things differently. A bitcoin currency standard, subject to the Lightning Network, allows Salvadorans living in the United States and elsewhere to send money home without the significant fees common to Western Union and other international senders. If all Salvadoran emigrants were to use the Lightning Network for money transfers, an additional 1 billion could $ Flows into El Salvador’s economy each year.

In addition, smartphone frontends like Strike enable easy transfer of funds, denominated in dollars or bitcoin, to everyday purchases such as groceries. As mentioned above, traders under the new Salvadoran system can instantly convert the received bitcoin back into dollars or keep bitcoin in their accounts if they prefer.

Salvadorans first piloted this system in the El Zonte “Bitcoin Beach” project, and it has been a success. In an insightful interview with Stephan Livera, Bitcoin Beach founders Michael Peterson and Nicolas Burtey described how their wallet designs evolved to meet the needs of low-income Salvadorans.

“Transaction costs [with the base layer Bitcoin network] continued to ramp up. And we saw $ 3, $ 4 transaction costs … we knew we had to change something, otherwise it just would not be sustainable, ”Peterson said. The problem prompted Peterson and Burtey to implement the Lightning Network on Bitcoin Beach and eliminate the problem of high transaction fees.

Over time, if El Salvador’s bitcoin law is successful, the country will for the first time have proven that bitcoin can be deposited by a sovereign nation state. both as a store of value, like gold, and also as an exchange for everyday transactions.

When El Salvador demonstrates that bitcoin can be used this way, in a low-income country where 70 percent of residents lack bank accounts, the nation will have proven that bitcoin is usable everywhere in this way including the United States.

One of the most interesting things that came out of Nic Carter’s Twitter Spaces call with President Bukele was the possibility of turning El Salvador into a center for carbon-free bitcoin mining. Elon Musk and other bitcoin critics have argued that the computing power used to secure the Bitcoin network increases carbon dioxide in the atmosphere too much.

Coincidentally, El Salvador is rich in clean, carbon-free geothermal energy. Nearly a quarter of the electricity in El Salvador comes from volcanic heat that requires no carbon emissions. Two-thirds of El Salvador’s geothermal energy remains untapped: enough to power 3 to 4 percent of the Bitcoin network.

During the call, Bukele was asked whether El Salvador was interested in establishing bitcoin mining in the country or not. He said that the idea had not been at all before, but that the idea had great potential:

We have a plan, it had nothing to do with bitcoin, but we have geothermal energy here … volcanoes [that turn] the water into water vapor and it creates energy. So we have produced that energy [beginning] 50 years ago. But … we lose a lot of energy by transporting the energy from geothermal plants to the cities. So we want to promote … on the edge of the plants … these industrial parks where you can set up your factory and you get cheap, 100% clean, 100% renewable, 0% CO2 emissions [energy]. And we would not do that because of bitcoin, but because people want to invest in factories that have no carbon footprint … Probably someone will set up a mine with cheap, clean and renewable energy.

Sure enough, later in the day on June 9, Bukele tweeted that he had “instructed the president of LaGeo,” the state-owned geothermal company, “to make a plan to offer very cheap, 100% pure bitcoin mining facilities, 100% sustainable, [zero-emissions] energy from our volcanoes. ”

Energy costs are the largest single expense for bitcoin miners; in El Salvador, miners were able to generate significant revenue for the country and significantly reduce the cost of electrifying rural areas.

In response to El Salvador’s bitcoin movements, politicians in several other Latin American countries expressed their desire to bring a bitcoin standard to their countries. The first was Carlitos Rejala from Paraguay, who on Twitter suggested that Paraguay was working with PayPal on such a project.

Panama legislator Gabriel Silva followed suit and tweeted: “This is important. And Panama cannot be left behind. If we want to be a true technology and entrepreneurship center, we need to support cryptocurrencies. We will prepare a proposal for presentation on [legislative] Assembly. If you are interested in building it, please contact me. ”

Legislators from Brazil, Mexico, Colombia and Argentina soon followed. None of these numbers have the same impact on their governments as President Bukele has in El Salvador, but some of them may well succeed in following El Salvador’s leadership and effectively creating a multinational consortium of countries that use bitcoin as a legal tender.

Although other countries do not follow El Salvador’s leadership, it is of great importance that a single sovereign nation state would adopt bitcoin as a legal tender.

El Salvador’s Bitcoin law creates what Bukele calls “a sanctuary for crypto,” a secure and predictable legal environment for bitcoin entrepreneurs to build new and innovative tools. This environment attracts many of the industry’s most talented and creative people to El Salvador, which enriches native Salvadorans and accelerates the development of a more inclusive global financial system.