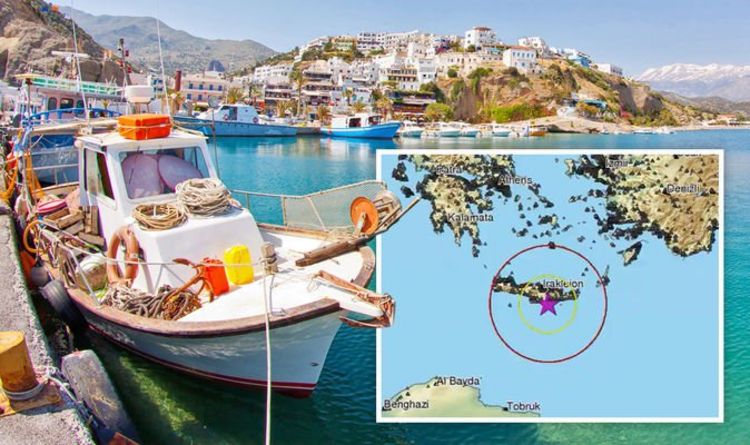 The quake struck at a depth of 40.5 kilometers about 12 miles off the coast of Avri, a coastal town in the south of the island, aaccording to the Athens-based Geodynamic Institute. The strong tremor took place around noon. 19.30 local time (17.30 UK time).

Firefighters and police said they had not received immediate calls for help or reports of injuries.

Local reports say the quake was felt as far away as Chania on the northern part of the island.

The quake struck as Cretans and other islanders in the region claimed a rare hurricane-like storm.

Storm Ianos is set to bring heavy rain and power outages to parts of western Greece.

The cyclone is moving rapidly eastward and is on track to bring winds up to 73 mph over the weekend.

The Peloponnese region must first be hit before the storm makes its way to Athens and Crete.

During the summer months, the population swells when holidaymakers flock to the fifth largest Mediterranean island.

Greece is one of the most earthquake-stricken countries in the world.

Crete itself has a high incidence of earthquakes, most of which do not cause death or serious injuries.

However, a deadly earthquake struck Greece in 1999, killing 143 people.

The tragedy struck near the capital Athens.

In May, a magnitude 6.5 earthquake struck south of Crete.

The strong tremor was felt all over the island.

It happened at a depth of six miles according to the European Mediterranean Seismological Center (EMSC).