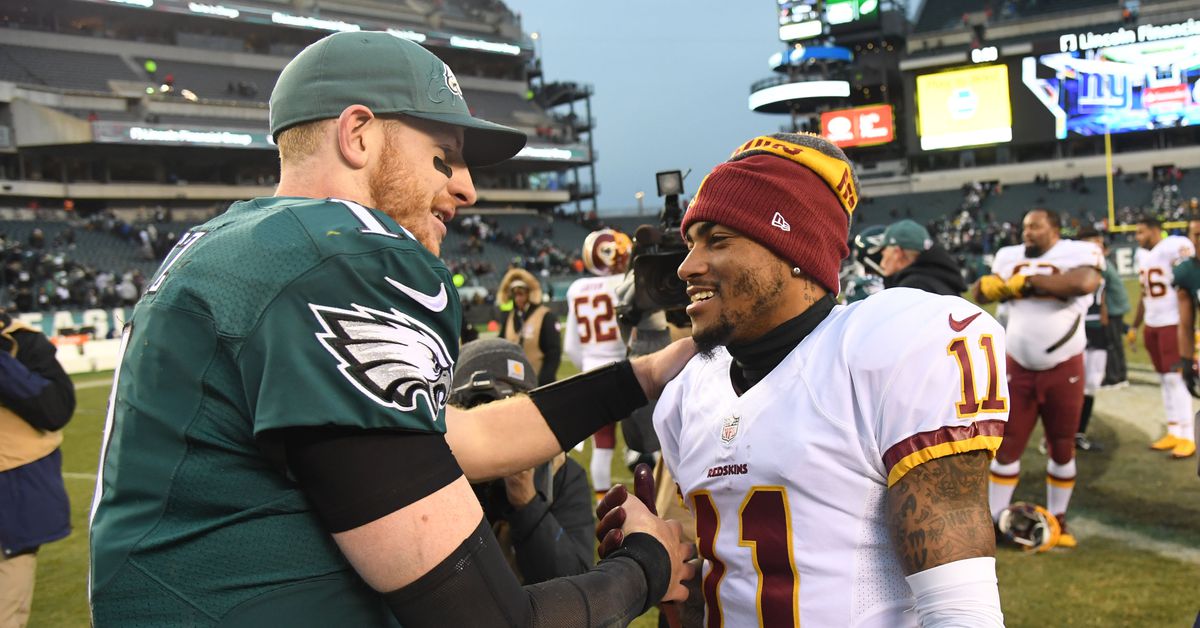 The Philadelphia Eagles resumed their OTA practice schedule on Tuesday. The session was open to media and I was there. Keep in mind that these are all non-contact drills at this point. Players aren't allowed to wear pads yet. There 's only so much to gleaned from guys running around in shorts, but here' s what I noticed.

CARSON WENTZ UPDATE: Louis Riddick just might be on something because Wentz was looking awfully sharp out there today. I didn't see an incomplete 3-on-3 drill. Wentz dropped a dime to Zach Ertz on the sideline during 11-on-11. Then hit DeSean Jackson over the middle from about 35 yards for a touchdown. Wentz found an open Jackson for another touchdown in red zone drills. Wentz and Jackson are not connected to a 40+ yard deep bomb just yet ̵

1; Wentz aired one out today but Rasul Douglas had good coverage and it was incomplete – but they already have a good chemistry in the short and intermediate passing game. That's an encouraging sign at such an early point in the offseason. Another highlight came when Wentz lobbed up a pass to JJ Arcega-Whiteside, who made one of his signature jump ball catches in the corner of the end zone. Sidney Jones basically got Moss in coverage. Good to see Wentz making trusts of trust throws after struggling to do that at times in 2018. It wasn't a flawless practice for Wentz as Kamu Grugier-Hill and Jones broke up a couple of his attempts but there was a lot more good than bath.

• ATTENDANCE UPDATES: Malcolm Jenkins, Alshon Jeffery, Lane Johnson, and Jason Peters are not at OTAs. Zach Brown's practice after missing last week's session but he didn't participate at all. Brown was chatting to Jim Schwartz prior to practice.

• DEPTH CHART UPDATES: Avonte Maddox was playing on the outside with the first team defense while Jones was working in the slot. Last week it was the other way around. The Eagles are experimenting with their defensive back options, as they should. LJ Fort and Kamu Grugier-Hill took first team linebacker reps with Bradham, Brown, and Gerry not practicing.

• Nate Sudfeld was up and down once again. He is on the ball for too long before throwing a receiver on a crossing route. As a result, Josh Hawkins was able to undercut the route for a pick six. Sudfeld also overthrew a quick slant to Charles Johnson. Sudfeld did earn praise from coaches and teammates after hitting Richard Rodgers on a fade route in the back corner of the end zone for a touchdown.

• Undrafted rookie free agent linebacker T.J. Edwards stood out on a few occasions. The Wisconsin alumnus notably became a screen and broke up a short pass over the middle meant for Wendell Smallwood. Edwards reportedly received the most amount of guaranteed money of any Eagles UDFA signing. He could really push for a roster spot.

• Grugier-Hill had an active practice as well. He picked up a bad throw from rookie quarterback Clayton Thorson during 3-on-3 drills. Kamu also knocked down a goal line pass for Dallas Goedert. He proceeded to stare at the second-year tight end and tell him to get him out. Love Kamu's energy.

• One of the biggest plays in practice was a reception at … Carlton Agudosi ?! The Rutgers alumnus caught a pass from Clayton Thorson deep down the field. Avonte Maddox and Rasul Douglas both had Agudosi covered well; The ball should have been picked up … but the 6-6 wide receiver tracked the ball better than his defensive back couterparts. This might be the only time I write about Agudosi this entire offseason.

• Arcega-Whiteside's jump ball touchdown reception from Wentz was really impressive. Fantastic body control and strong hands. JJ almost made another impressive jump ball catch along the sideline but he lost control as he was being "contacted." That was the second week in a row. He obviously has to do a better job of finishing those plays.

Some highlights for the Boston Scott hive out there: the running back had a nice reception on a wheel route. He also saw a first team group install rep where he pitched the handoff back to Wentz, who connected with Nelson Agholor deep down the field. Flicker flicker!

• DeSean Jackson, Boston Scott, Donnel Pumphrey, and Other Thompkins were the point of return returns during practice. Jackson's only roster lock at that spot and it's surprising if it was the full time point return. I wonder about the Eagles' plan to that spot.

• Cameron Johnston was booting points. He looks good. There's a very important point observation for you. (But really just for BGN's own Alexis Chassen.)

• Shelton Gibson and Sidney Jones have been the first team gunners on point coverage. Maybe a good sign for Gibson if he tries to fight for a fifth or sixth roster spot?

• Undrafted rookie free agent offensive lineman Ryan Bates is lining up at right hand on the second team off line but he's also getting center reps during 7-on-7 drills .

• #NicknameAnalytics update: Prior to practice, Jim Schwartz referred to Andrew Sendejo as "Dejo" (pronounced: Day-ho). That could be a good sign for his roster and thus a bad sign for the Eagles landing another 2020-round compensatory pick.

• #JerseyNumberAnalytics update: Casey Tucker is wearing No. 50. He's an offensive tackle. That's a horrible selection. It really makes me wonder if he's even taking this NFL opportunity seriously. Does he even know he? S not a linebacker?

BGN Coverage: The following practices are open to the media: June 3, June 5, June 11-13. All be at all of those practices. Follow me for live updates: @BrandonGowton .