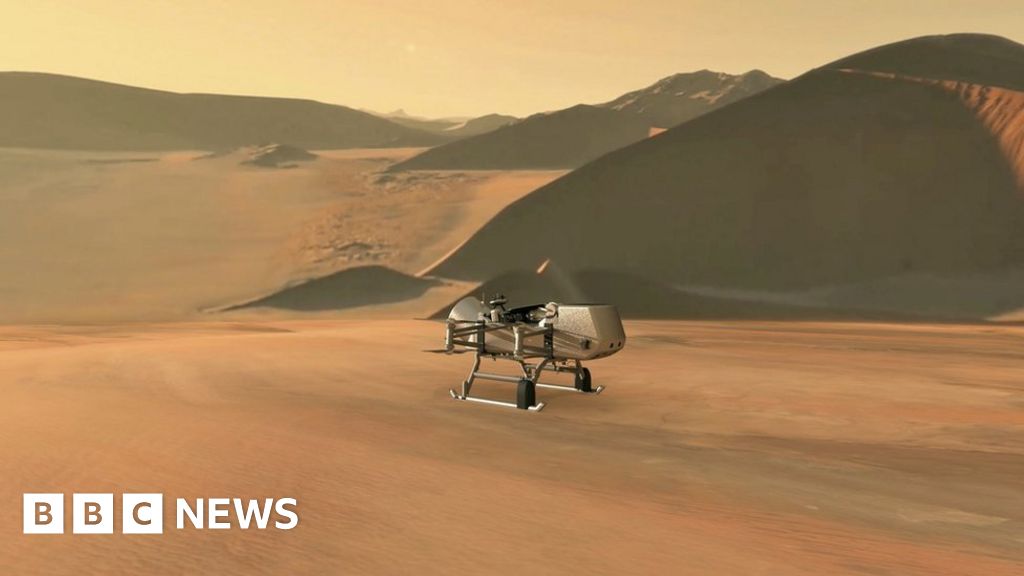 Nasa will fly a drone helicopter mission to cost $ 1

Titan plays host to many of the chemical processes that could have sparked biology on the early Earth.

The eight-rotor drone will be launched to the Saturnian moon in 2026 and arrive in 2034.

Dragonfly was selected as the next mission in NASA's New Frontiers program of medium-class planetary science missions.

It was in competition with the Comet Astrobiology Exploration Sample Return (CAESAR) mission, which would have delivered a sample from a comet to Earth.

Titan has wind, rivers, seas and lakes, just like Earth – but with an exotic twist.

The huge moon (it is second only in size to Jupiter's moon, Ganymede) has its own seasonal cycle, where wind and rain have formed the surface to form river channels, seas, dunes and shorelines.

The average temperature or -179C (-290F) means that mountains are made of ice, and liquid methane is many of the roles played by water on Earth.

Dragonfly will first land at "Shangri-La" dune fields, which are similar to the linear dunes found in Namibia in southern Africa.

The drone will explore this region in short flights, building up to a series of longer "leapfrog" flights of up to 8km (5 miles), stopping along the way to take samples

"Flying on Titan is actually easier than flying on Earth," said the mission's principal investigator Elizabeth "Zibi" Turtle, from Johns Hopkins University Applied Physics Laboratory in Maryland. "The atmosphere is four times denser than the atmosphere at the surface of the Earth and the gravity is about one-seventh of the gravity here on Earth." She added: "The best way to travel and the best way to go long distances so that we can make measurements in a variety of different geologic environments. "

It will finally reach the Selk impact crater, where there is evidence of past liquid water and organics – the complex carbon-based molecules that are vital for life. These may have existed together for tens of thousands of years.

"What really excites me about this mission is that Titan has all the key ingredients needed for life," said Dr. Lori Glaze, the director of planetary science at NASA. "Liquid water and liquid methane. We have the complex organic carbon-based molecules. And we have the energy that we know is required for life." "So we have on Titan opportunity to observe the processes that were present on early Earth when life began to form and even more conditions that may be able to harbor life today. "In addition to studying this" pre-biotic chemistry ", dragonfly carries instruments that can investigate the moon's atmosphere and the water-ammonia ocean thought to lie beneath its surface. It will also search for chemical evidence of past or present life.

"With the Dragonfly mission, Nasa will again do what no-one else can do," said the US space agency's administrator, Jim Bridenstine.

"Visiting this mysterious ocean world could revolutionize what we know about life in the Universe. This was a few years ago, but we're now ready for Dragonfly's amazing flight. "

The lander could eventually fly more than 175km (108 miles) – nearly double the distance traveled to date by all Mars rovers combined.

Dragonfly will be powered by a Multi-Mission Radioisotope Thermoelectric Generator (MMRTG), which converts the heat released by the decay of a radioactive material into electricity. see, there is no use of solar power efficiently.