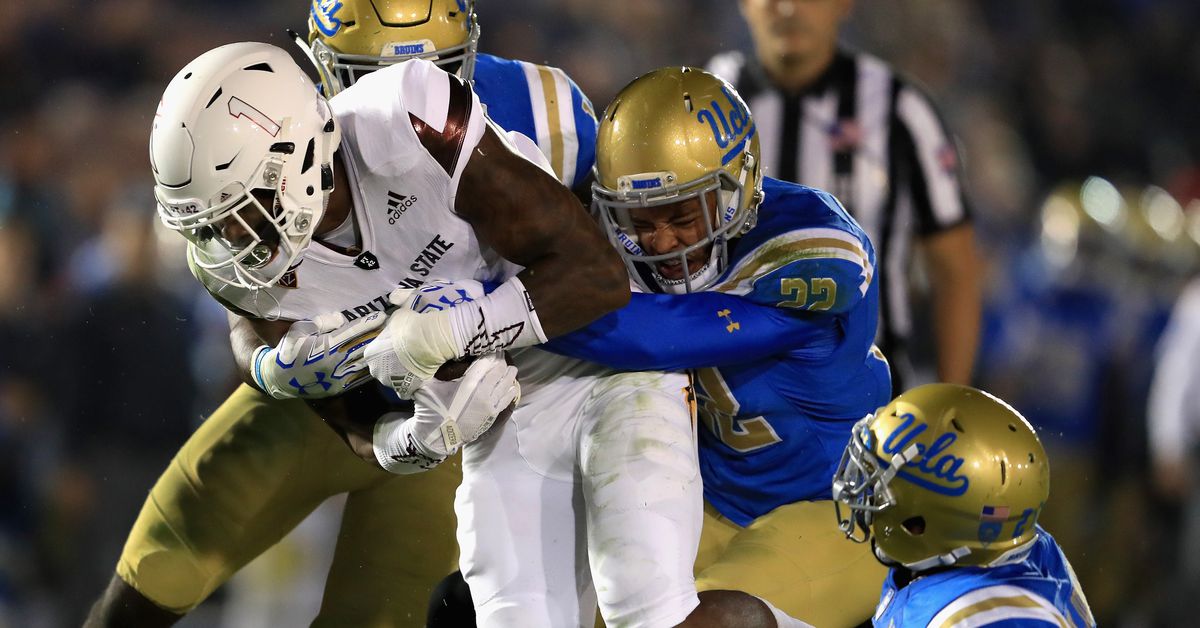 The common theme in the Patriots was draft physical, high-character, and great football IQ players. In an era where NFL defenses are getting smaller and faster, New England is getting bigger and stronger. I believe that is a good step for the Patriots from a mentality standpoint because they are the alpha of the NFL and have been more successful when they were the aggressors than the other way around.

The Patriots opened up by staying put with the 32nd pick and taking Arizona State wide receiver N'Keal Harry. Harry is a big and physical receiver who is not only dominant at hauling in contestable passes but is also dominant with the ball in run-after-the-catch situations. With Rob Gronkowski announcing his retirement last month, the Patriots needed to get a passport that could be in the tight-window passes and win 50/50 balls and punish would-be tacklers in the open field.

Those two skills are Harry's bread and butter. Put him in an offense where Josh McDaniels can make him free releases and create opportunities along with a quarterback who is one of the most accurate passers in the history of the league, and watch him eat. On top of that are blocks like a 6'2 ”228 receiver and punishes cornerbacks for being aggressive against the run.

The Patriots then traded up eleven picks to land a big and physical cornerback in Joejuan Williams. Williams is not the fleetest at the position with a 4.64 40, but is 6'4 "with 32" arms and plays that way. The patriots have been looking for that big match up CB who can play across from the best in football in Stephon Gilmore, so they can better utilize their coverage resources against bigger receivers and tight ends, who have killed them in the past. Williams will see action against bigger receivers on the boundary as well as TEs flexed outside their inline role. He has some experience playing in the box and in the slot, although a very limited sample vs. playing outside, so anything extra on top of playing the CB position would be of great use.

Gobbling up tremendous value in the middle rounds

The Patriots did some wheeling and dealing afterwards, turning Picks 2-64 and 3-73 into 3-77, 3-87, 3-101, 4-118, 4 -133, and a 2020 fourth-round pick. The Patriots then snagged Michigan's Chase Winovich with the 77th pick, a player I gave a second round grade and one that was like John Simon with a ceiling of Mike Vrabel if everything works out. Winovich has a relentless engine and while not an explosive athlete has solid closing speed and moves down the line very well.

He's the type of player who will do what the team asks him to do in order to win, including special teams where his 4.59 speed at 255 pounds serve as an asset. Winovich made more than 12th overall pick and former ex-Wolverine Rashan Gary, who lined up on the other side of the field. He plays every down with a great sense of urgency, but at times will play out of control – although that is an easy fix.

The Patriots then pulled the saw pick with their second third-round selection: Alabama running back Damien Harris . Harris comes from a similar situation in Alabama as he will face in New England, where he's sharing time with other talented backs. The Patriots have a talented backfield with one of the best young RBs in Sony Michel, a swiss army knife RB in Rex Burkhead, and one of the best receiving backs in James White. If one of the three players is not available, then the Patriots will be very thin and at one point last year they were relying on Cordarrelle Patterson to be their main running back.

The addition of Williams, who pretty much can do everything you can ask RB to do (run, catch, pass block) gives the Patriots the extra security of depth and a player you can give the ball 15-20 times a game and not worry too much about his production. Harris is a one-cut, see-the-hole-and-go runner who follows his blocking and runs with great power and leverage. Once it gets into the open field, DBs will have a tough time tackling it if it can run through or sidestep out of control tacklers.

The final pick of the third round comes at a position which was the highest need in the trenches: with Isaiah Wynn coming off a major injury and Trent Brown signing a massive contract with the Oakland Raiders, the Patriots had a hole at the left tackle position. It appears either Wynn, a first round pick and season ago, or a future trade acquisition will be the guy tasked with two blocks Tom Brady's blind side. The Patriots did not have much tackle depth, even with the assumption that Wynn will lock down the LT position for the next four years, so grabbing someone who at the minimum could be a third OT was critical in the draft.

The Patriots found their guy in Yodny Cajuste, a player who is basically the anti-Shaq Mason in which he is well-versed in pass protection although he can clean his technique there and a bit under-developed in run blocking although he plays with that mean streak and has solid hands. Dante Scarnecchia will coach him into a quality starter sooner than later than Cajuste already has a solid foundation to work with.

Another strong fourth round

The fourth round is trial to be the money round for the Patriots of late, as the Patriots made two solid selections. With their first pick, they took Arkansas guard Hjalte Froholdt. Froholdt is another OL with athletic upside that needs his technique with Dante Scarnecchia. He's not ready to play in his first year, but makes for a solid backup this year with Ted Karras behind the trio of Joe Thuney, David Andrews, and Shaq Mason. His 6'5 ”frame suggests are line up at guard more than center. Give him a year to develop with Scar while the Patriots are at the position, then take over the left guard next season when Joe Thuney and Ted Karras reach free agency.

NFL defenses are getting smaller and faster, New England is getting bigger and stronger.

The Patriots also decided to take on a development quarterback with their other fourth-round pick. The Patriots will carry 3 QBs on the 2019 roster with Tom Brady, Brian Hoyer, and Jarrett Stidham. Stidham looked like a potential first rounder after a successful 2017 campaign, but struggled when teams heated him up in 2018. He played in a spread offense that didn't best utilize his strengths and didn't have great receiving talent although the Patriots did pick Ryan Davis as an undrafted rookie

Stidham has favorable traits for a pocket suit, although he will have to learn how to process the game at the line of scrimmage and react better to pressure. Fortunately, he can learn from one of the best in Tom Brady. With a fourth-round pedigree, Stidham has two camps to prove is a capable backup to Brady before talking about any future starting potential. If he is able to at least perform in a backup capacity, it's a solid return for a late round four pick.

The Patriots entered the draft with zero picks in the fifth round, but they ended up making two. In true Belichick fashion, the Patriots picked flyer guys and special teams players. The first is Byron Cowart, who is a bit of a tweener between DE and DT. At 6'3 ”298 with long arms, projects have either a 5-technique defensive end or a defensive tackle at the pro level. There is not a lot of college production, so the Patriots will have to first figure out what role they could play then coach him up for that.

The most surprising pick of the day was with the Patriots' other fifth -round selection of Stanford punter Jake Bailey. Bailey is different from your typical Belichick punter as he kicks with the right leg, but there is a lot of strength in that right leg. The two things he does well are directional kicking and getting a good spin on the kick. Not only did Bailey lead the country in hang time, but also the Stanford point coverage unit did not allow a single big (20+ yards) point return.

He will need to work on being able to place the ball inside the 10-yard line because the patriots are rarely ever three-and-out these days, and that means he's probably punting around midfield. There is also a versatility on kickoffs such as Bailey's leg strength and ability to kick kick coverage, especially when place kicker Stephen Gostkowski gets older. With a fifth-round selection, Bailey doesn't believe their incumbent punter Ryan Allen, who signed a one-year free agency deal last month, but also steal his job.

The last selection was Ole Miss cornerback Ken Webster. Webster tested very well and faced quality competition in the SEC, including D.K. Metcalf and A.J. Brown in practice. He had solid college production as a corner, although given the depth of the position in New England he needed to add some versatility to his game. His athletic numbers suggest core special teams with more than Keion Crossen as a potential defender with 4.43 speed, 43 ”vertical, 11'1” broad jump, 4.14 5-10-5 shuttle, and a 6.85 3-cone at 5'11 "203. Webster does have some experience playing all over the secondary for Ole Miss, which he'll need in order to see the field in New England.

How would you rate the Patriots' 2019 draft class?