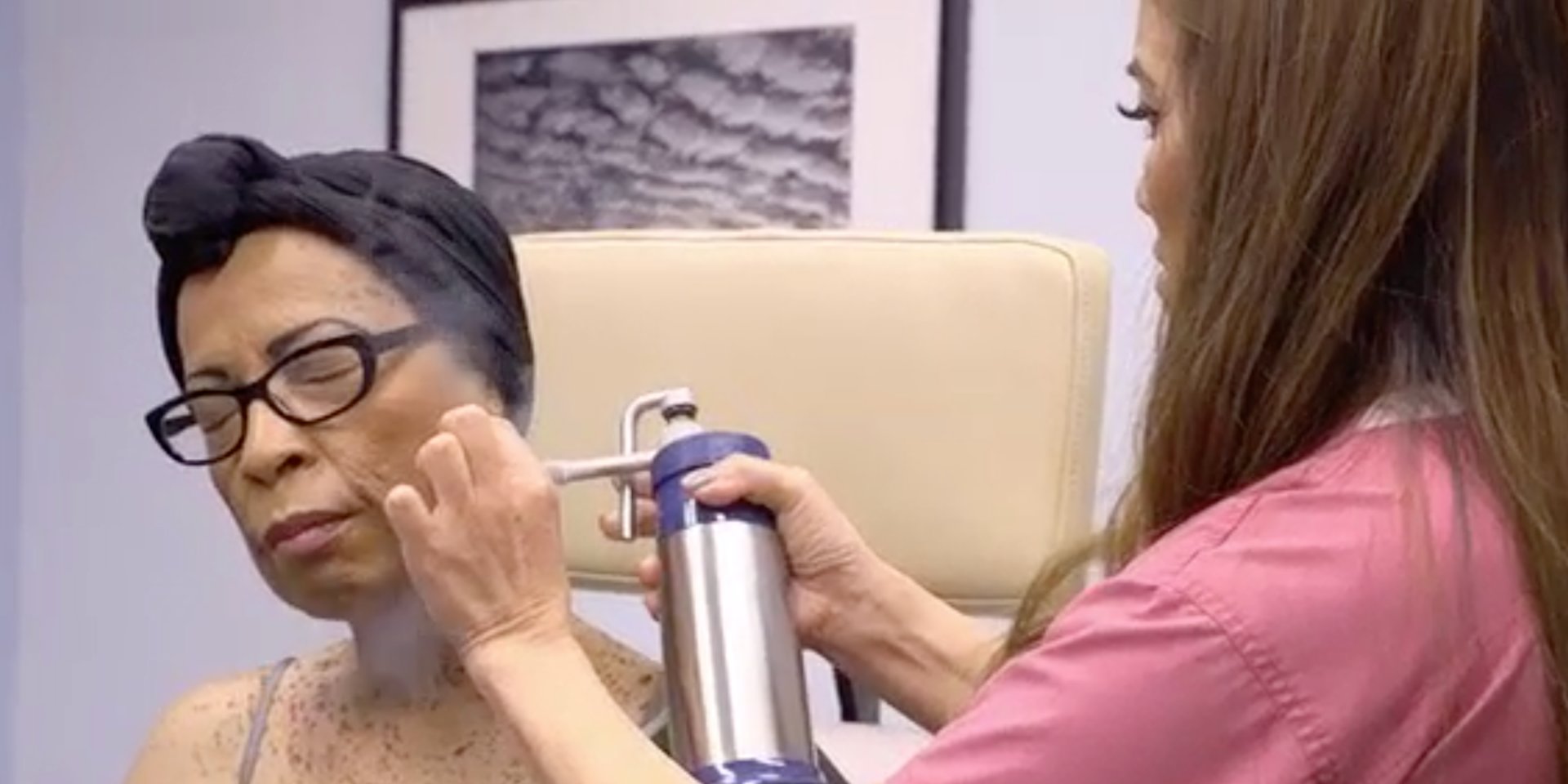 The second episode of the season, sent Thursday evening, exhibited a woman with extraordinary tolerance for pain during a procedure to remove common skin growth.

Here's a closer look at her case.

In an interview segment Pat Pat, she said sought Lee's expert opinion on what appeared to be "fast-growing moles."

The dark brown spots first began to appear when Pat was in her mid 20's, but later spread across the neck, temples, chest and stomach. They also scratched, stuck and caught on her clothes.

"Over the last three years, they have spread very quickly and that is a concern for me," said Pat. "My father who passed by had skin cancer, so I'm always thinking of skin cancer. I just want to know what causes these moles."

But the mole was actually growth called seborrheic keratoses

These common spots may act as warts or skin cancer, but they are completely harmless, according to the American Academy of Dermatology (AAD). It is still not clear why they occur, but seborrheic keratoses seem to run in families. And because most people get them when they are middle-aged or older, they are sometimes referred to as "aging of aging," according to the AAD.

Most people develop many seborrheic keratoses, rather than just one. Pat happened to hundreds.

"Pat has so many of these seborrheic keratoses, it's almost like she has more of them than she has regular skin," Lee said.

Read more : The best pimple jumping videos from 2018, from a 50-year-old blackhead to a cottage-cheese-leg cyst

Lee then offered to remove some of Pat & # 39; s keratoses by using cryotherapy. In this procedure, a dermatologist uses extremely cold liquid nitrogen for a seborrheic keratosis, and later the growth decreases. Although it is possible for new ones to grow elsewhere on the body, the removed keratoses typically do not return, according to AAD.

The only catch? It is famously painful.

"Liquid nitrogen treatment can be quite painful," Lee said. "It is so cold that it burns. I even know I could only tolerate three or four [sebhorreic keraotses] removed at a time … The number of these that I can remove is very dependent on her pain limit."

When the procedure began, Lee Pat told her to "cry uncle" if she needed a break.

But the pain of cryotherapy was not consistent with Pat's pain threshold. Her face barely jumped as Lee walked through the container after the liquid nitrogen container, freezing a staggering total of 307 seborrheic keratoses.

"Throughout my career, I've never had anyone resist me from treating more than 40 or 50 of these zebra-keratosis keratoses," Lee said. "I don't think I've ever had a patient with the pain tolerance Pat has. Many patients can't tolerate this procedure."

In an interview segment filmed after the procedure, Pat said that mental tactics helped her persistently.

"I am practicing to relax and I thought about things," she said. "I compared the pain with other pains I've experienced. I had migraines until I was in my 50's. So that was how I could get through."

And the pain was probably worth it: Lee explained that after a healing period, Pat's once bumpy itchy skin would finally smooth out.

"These areas are getting darker and more upscale, maybe even blistering," she said. "They peel over the next few weeks, and then the skin will look beautiful and neat and smooth and clear."

Catch a sneak peek at the complete second season (including a glimpse of Pat's procedure at the 25-second mark) below. You can also see all episodes of "Dr. Pimple Popper" on the TLC website or the TLCGo app (available for Apple and Android).