Desalinates water in a greener and more economical way 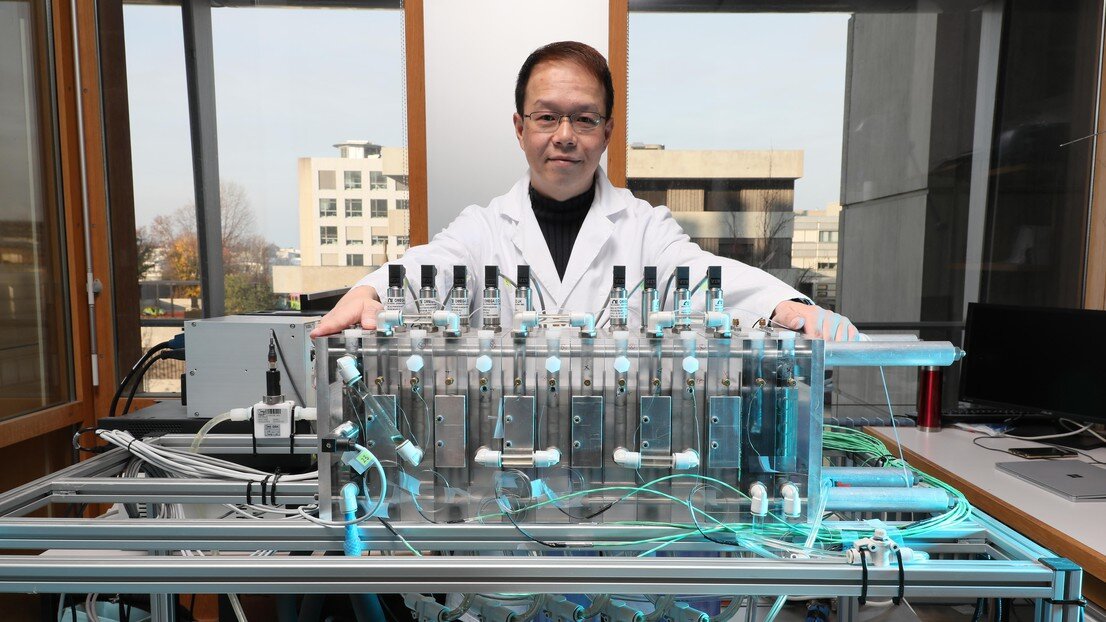 We know that excessive consumption, industrial activity, and global population growth are some of the factors that threaten access to drinking water to an increasing proportion of people worldwide. According to UNESCO data from 201

2, nearly 700 million people suffer from limited access to water, and this figure may increase to 1.8 billion by 2025. Desalination and treatment of industrial wastewater can produce large amounts of drinking water and these methods are already used in many countries and regions such as the United Arab Emirates, Saudi Arabia, China, Europe and the United States. But existing systems are expensive and use a lot of energy. Jeff Ong from EPFL's Inorganic Synthesis Laboratory and Catalyse have developed a water treatment machine that combines the benefits of all the major technologies currently in use while attaining improved performance. For example, the prototype removes more than 99.9 percent of the salt from seawater with the same flow, but uses less energy. The system will be tested in real conditions this year.

The major large scale desalination technology used today is reverse osmosis. When two identical liquids separated by a semipermeable membrane have a different concentration of salt or other minerals, it passes with the lower concentration through the membrane until each liquid has the same concentration. To reverse this natural process and thus maximize the amount of fresh water, the pressure is applied to the more concentrated liquid so that it flows through the filtration membrane toward the drinking water side. The technique uses a relatively large amount of electricity (about 4-5 kWh / m3), and the membranes deteriorate rapidly, just as other components are broken down by mineral particles. They must be cleaned chemically several times a year and replaced very frequently. "It results in high maintenance costs for manufacturers," says Ong. The desalination concept used by the EPFL spin-off membranes made of inert hydrophobic material wears out faster and can be re-used cheaply.

To maximize salt separation as EPFL prototype rises to more than 99.9 percent, Ong assembles a variety of evaporation-based desalting modules. To address the system's primary weakness energy consumption – he made several improvements, including internal heat recovery and more efficient heat transfer. By reducing the pressure, the water can be boiled at a temperature of less than 80 ° C. The resulting steam is cooled and recovered as fresh water. The rest of the liquid, which contains the remaining salt, passes into another cell with even lower pressure and so on. Heat recovery elements are used to preheat and evaporate the remaining salt water without using any outside energy. At each stage, the resulting vapor is cooled and the resulting fresh water recovered. The fresh water is removed by means of heat exchanger devices arranged to cool the system. By reusing heat that would otherwise be lost, E-METS has a much lower carbon footprint than a conventional thermal system. "These evaporation and cooling flow principles are widely used in the nuclear industry," Ong explains. "We are the first to apply the concept in the water sign area."

The recent improvements in this hybrid prototype have also led to time savings because the throughput is now up to twice as high as that of reverse osmosis systems. In addition, the new system has the advantage of being able to handle very high salt concentrations – more than 200 g / l, which is twice as much as standard thermal separation technology and more than four times as much as reverse osmosis. Such high salt concentrations can e.g. Available in waste solutions produced by reverse osmosis plants.

The desalination market is expected to be 27.4 billion. Dollars in 2025, when the water and water treatment market totaled DKK 675 billion. The startup, Aqualife Global, is currently integrated with the marketing of the E-METS technology. The system's modular design means that it can be adapted to the amount of water to be treated. This year, the co-founders intend to develop a version that fits into a shipping container, making it easy to transport and let it be created where it is most needed. In addition to being used for desalination of seawater, the system can be connected to reverse osmosis plants, which helps them produce higher amounts of desalinated drinking water. The co-founders also see many other potential uses, such as the treatment of waste water from the mining industry – and more specifically for lithium mining – and the removal of sulfur from waste water produced by power generation companies. The system could also be used to treat wastewater produced by the food and oil and gas industries.