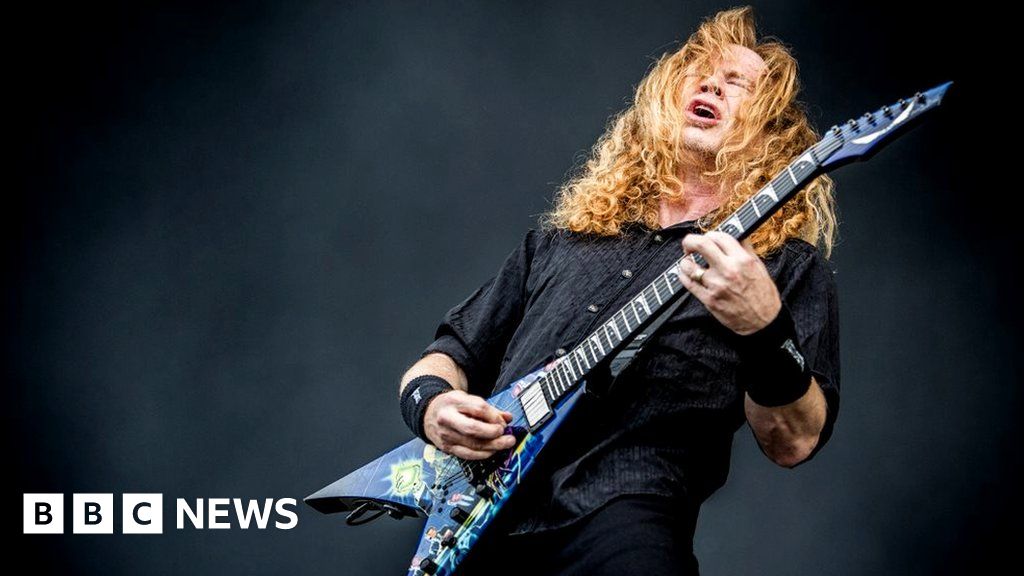 Megadeth has canceled most of their upcoming tour as frontman Dave Mustaine undergoes treatment for throat cancer.

Mustaine announced his diagnosis on the metal band's website, but said he was optimistic about his treatment plan.

"It's clearly something to be respected and faced head on – but I've faced obstacles before, "he said.

"I'm working closely with my doctors, and we've mapped out a treatment plan which they have a 90% success rate. Treatment has already begun."

Although the majority of Megadeth's tour dates have been canceled, the recently-announced "Megacruise" will take place as scheduled in October "and the band will be part of it in some form", Mustaine wrote.

Billed as "five days and nights of heavy metal decadence and debauchery , "the cruise is due to feature concerts, masterclasses and meet-and-greets with the band.

" I'm so thankful for my whole team – family, doctors, band members, trainers, and more, "he said. "I'll keep everyone posted."

Fans and fellow artists were quick to send messages wishing Mustaine the best.

Anthrax's Scott Ian said: "Please join me in sending all of our most powerful positive bullets to my brother Dave. You got this my friend, you can beat it – like you beat me in arm-wrestling! and get healthy! "

" Prayers and positive vibes out to my friend. Cancer doesn't stand a chance fighting this guy! " added Mike Portnoy or Dream Theater and Sons of Apollo.

"Tout le monde is with you, Dave," said Lacuna Coil frontwoman Cristina Scabbia. "We all love you and are with you."

The star's daughter, Electra, added: "I would do and give anything for this man. Dad, I love you so much.You've learned what love should look like, taught me reliability, perseverance, commitment … and mostly, strength.

Mustaine formed Megadeth in 1983 after an acrimonious split with Metallica, where he was the original lead guitarist.

The band were pioneers of what came to be known as" thrash metal ", playing faster and more than their contemporaries, with an emphasis on Mustaine's lightning-fast guitar skills.

Their independent-released debut Killing Is My Business … And Business Is Good! Capitol Records, who released the platinum-selling Peace Sells … But Who's Buying in 19 86.

The band's early success was marred by Mustaine's drug addiction, culminating in an arrest for driving under the influence in 1990.

After entering a rehabilitation program and getting clean, Mustaine refocused his attention on the band, culminating in the release of 1992's countdown to extinction – the band's most commercially-successful album, and a sign that metal still had an audience in the middle of grunge.

However, the band almost came to an end in 2002, when Mustaine fell asleep with his arm over the back of a chair – causing severe radial nerve damage.

Doctors told him he could back 80% of his movement back – but he'd never play guitar again. Undeterred, the star went through 18 months of painful therapy and got himself back on stage by 2004.

Their last album, Dystopia, was released in 2016, and the title track earned the band their first-ever Grammy, for best metal performance

Earlier this year, Megadeth released the career of retrospective Warheads on Foreheads, and was awarded the 35th anniversary of Killing Is My Business … and Business Is Good! Before Mustaine's cancer diagnosis

In his statement, the frontman vowed he would be "back on the road asap".