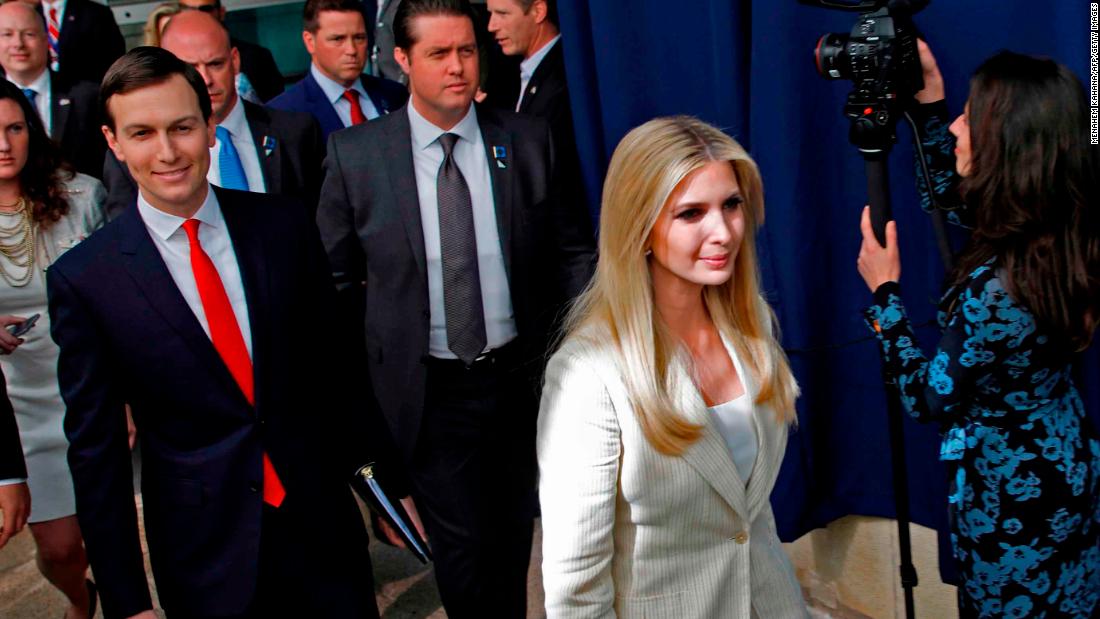 On Thursday at the White House, the Maryland Democrat alleged that Jared Kushner, who is also a senior White House adviser, had been using WhatsApp, a popular messaging application, to "communicate with foreign leaders" – something he said that Kushner's attorney had confirmed in a private meeting. He also contended that Trump's daughter Ivanka Trump, also a senior adviser, may be a violation of the Presidential Records Act with her use of private emails.

The allegations from Democrats that some of Trump's closest confidants – as well as form officials Steve Bannon and KT McFarland – used personal email come as Trump continues to attack Hillary Clinton for using a private email system when serving as secretary of state.

In the letter, Cummings revealed that his panel learned the new information in a private meeting in December with Abbe Lowell, an attorney for both Kushner and Ivanka Trump. Lowell referred to the White House and the National Security Council about whether Kushner communicated classified information through WhatsApp, something that constituted a "major security breach."

"For example during a meeting with Mr. Kushner's attorney, Abbe Lowell Mr. Lowell confirmed that Mr. Kushner has been using the messaging application WhatsApp as part of his official White House duties to communicate with foreign leaders. Mr. Lowell could not answer whether Mr. Kushner's communications included classified information, "Cummings wrote. 1

9659005] According to Cummings, when pressed how Kushner was backing up his communications in order to assure that he was not violating the Presidential Records Act, Lowell responded that Kushner took "screenshots" and forwarded them to his official White House email account or to the National Security Council. According to Cummings, when Lowell was asked if Kushner ever communicated information on WhatsApp, Lowell responded, "That's above my paygrade."

The Oversight Committee looked into the use of personal email at the White House in March 2017, when Republicans still controlled the committee. The committee launched a bipartisan investigation into the use of "personal email and messaging accounts" by "non-career officials at the White House," but Cummings says in the letter that even after he followed up in December 2018 requesting documents on the cusp or becoming chairman, "the White House failed to produce any additional documents" and "failed to provide the promised briefing during this timeframe."

"As you know, the White House has not produced a single piece of paper to the Committee in the 116th Congress – in this or any other investigation," Cummings wrote.

Lowell responded Thursday to Cummings "letter, which he said is" not completely accurate about what was said. " Lowell said that he "never" said that their December meeting that Kushner's communications on WhatsApp were with foreign "leaders" or "officials." "I did not specify who they were," Lowell said. "For example, he has numerous friends and contacts abroad." He acknowledged referring questions about Kushner's contacts through WhatsApp to the White House, and argued that Kushner "follows the protocols," including about classified information.

Lowell also denies that he revealed that Ivanka Trump continues to receive official emails to her private account that she does not have a forward to her government account, a potential violation of the Presidential Records Act.

Lowell says he was calling their discussion in regard to a period before September 2017. Now, he said, she "always" forwards emails to her official account.

A White House officially confirmed to CNN that the White House has received the letter and is reviewing it. Bannon could not be reached for comment. An attorney for McFarland declined to comment.

Cummings argues in his letter it could be a violation of the Presidential Records Act, which prohibits White House staff from using private email to conduct government business unless the individual forwards the message to the official account within 20 days. He also said that the Oversight Committee learned that McFarland was "an official business on her personal AOL.com account" when she was a national security adviser and that they had "also obtained a document that appears to show that Bannon, forms White House Chief Strategist , received documents "related to transferring US nuclear technology to Saudi Arabia.

Cummings says that he expects to hear back from the White House or will be forced to pursue other avenues to obtain the information he has requested.