COVID-19 tracking in Alaska: 223 infections and no deaths reported Wednesday 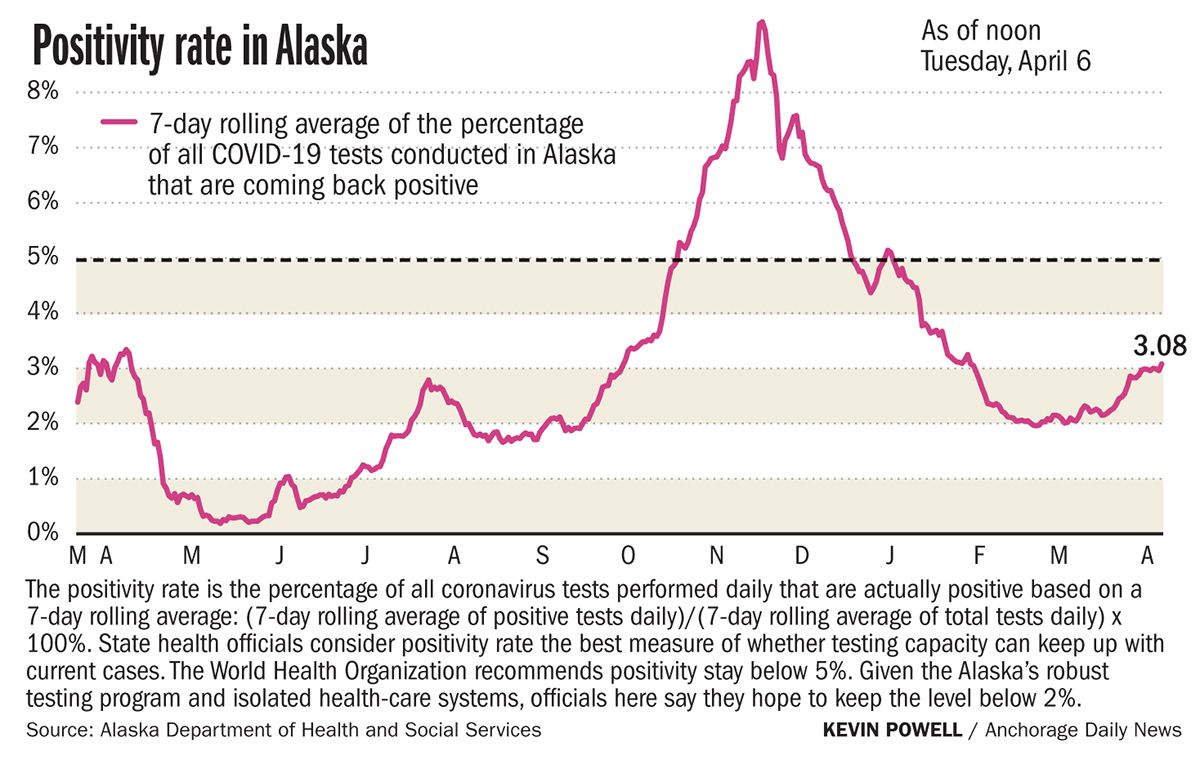 We make this important information available without a subscription as a public service. But we rely on reader support to accomplish this work. Consider supporting independent journalism in Alaska for only $ 1.99 for the first month of your subscription.

Although case counts and admissions in Alaska remain below what they were during a peak in November and December, the state’s average daily rate has been rising over the past few weeks. Many regions of the state are still in the highest alarm category based on their current infection rate per capita. Inhabitant.

A new coronavirus variant, first identified in South Africa, has been discovered in Alaska, according to a report released this week by the state Department of Health. The B.1.351 strain has caused particular concern among epidemiologists because the new COVID-19 vaccines are less effective against it.

So far, 75 cases of five coronavirus variants of concern have been identified through testing and sequencing efforts in Alaska, according to the latest weekly report from the state. Health officials continue to urge Alaskans to wear face masks in public, avoid large gatherings, wash their hands frequently and be vaccinated against COVID-19 to prevent further spread.

Alaska in March became the first state in the country to open vaccination requirements to all 16 and older living or working in the state. You can visit covidvax.alaska.gov or call 907-646-3322 to sign up for a vaccine appointment; new appointments are added regularly. The telephone line is staffed from 9 to 18:30 on weekdays and from 9 to 16:30 on weekends.

On Wednesday, there were 44 people with confirmed or suspected cases of COVID-19 in hospitals across the state, well below a peak in late 2020, but part of a small increase over the past few weeks.

Of the 217 cases reported among Alaska residents Wednesday, there were 77 in Anchorage plus six in Chugiak, 17 in Eagle River and one in Girdwood; one in Homer; to Kenai; one in Nikiski; and in Seward; six in Soldotna; to i Sterling; six in Fairbanks plus three in the North Pole; to i Delta Junction; one in Big Lake; 16 in Palmer; 54 in Wasilla; five in Juneau; one in Ketchikan; to i Sitka; and one in Dillingham.

Among communities of less than 1,000 people unnamed to protect privacy, there were two in the northern Kenai Peninsula; one in the Denali district; one in Fairbanks North Star Borough; and in Yakutat plus Hoonah-Angoon; and one in Aleutians West Census Area.

Six cases were also reported in non-residents: one in Sikta; three in Juneau; and two in unidentified regions of the state.

State data do not specify whether people who test positive for COVID-19 have symptoms. More than half of the country’s infections are transmitted from asymptomatic humans, according to CDC estimates.