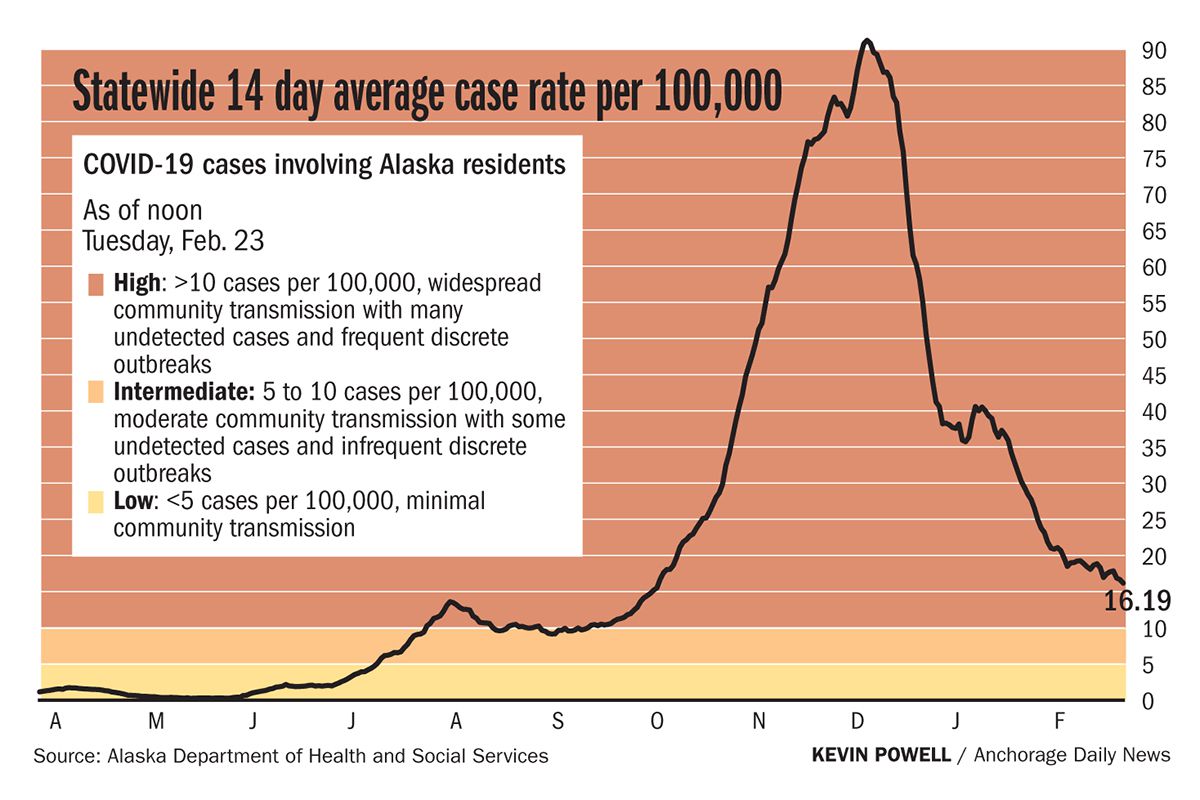 We make this important information available without a subscription as a public service. But we rely on reader support to accomplish this work. Consider supporting independent journalism in Alaska for only $ 1.99 for the first month of your subscription.

The latest number of cases is part of a trend in Alaska with declining infections over the past two months following a peak in November and early December that strained hospital capacity. Admissions to Alaska are now less than a quarter of what they were during the peak in November and December.

On Tuesday there were 35 people with COVID-19 in hospitals across the state, including five that was on fans. Another three patients were thought to have the virus.

The COVID-19 vaccine reached Alaska in mid-December. As of Tuesday, 144,419 people – nearly 20% of Alaska’s total population – had received at least their first vaccine shot, according to the state’s vaccine monitoring dashboard. This is well above the national average of 13.3%.

Among Alaskans 16 and older, 26% had received at least one dose of vaccine. The Pfizer vaccine is approved for use in people 16 years of age and older, and Moderna has been approved for use in people 18 and older. At least 89,147 people had received both doses of the vaccine. According to a national tracker, Alaska has currently vaccinated more residents per capita. Inhabitant than any other state.

Healthcare workers and caregivers and residents were the first to be given priority to receive the vaccine. Alaskans older than 65 were eligible in early January, and the state further extended eligibility criteria this month to include educators, people 50 and older with a high-risk medical condition, key frontline workers 50 and older and people living or working in gathering settings such as shelters and prisons.

Those eligible to receive the vaccine can visit covidvax.alaska.gov or call 907-646-3322 to sign up and to confirm eligibility. The telephone line is staffed from 9 to 18:30 on weekdays and from 9 to 16:30 on weekends.

Despite the small print, most regions of Alaska are still in the highest alert category based on the current infection rate per day. Citizens and public health officials continue to encourage Alaskans to keep up with personal virus-reducing efforts such as hand washing, masking and social distancing. A highly contagious variant of the virus reached Alaska last month.

Of the 56 cases reported among Alaska residents Tuesday, 18 were in Anchorage plus one in Eagle River; one in Homer; three in Kenai; one in Sterling; and in Kodiak; four in Fairbanks plus one in the North Pole; fire in Palmer; 13 in Wasilla; and in Juneau; fire in Petersburg; one in Sitka; one in Unalaska; and two in Dillingham.

Two cases were also identified among non-residents of Unalaska.

State data do not specify whether individuals who test positive for COVID-19 have symptoms. More than half of the country’s infections are transmitted from asymptomatic humans, according to CDC estimates.