COVID-19 data: A look at what drives Utah’s latest rise in coronavirus cases 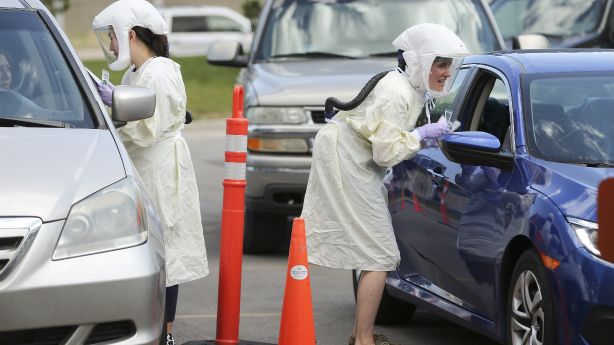 SALT LAKE CITY – Anyone who has been following COVID-19 trends in recent weeks has probably noticed that there has been another increase in cases reported in Utah.

The epidemiological curve of the hive state showed deceleration near the tail in late July after what was the highest reported case number so far. This uptick came shortly after Memorial Day, after the state experienced a plateau of new cases in the weeks before the holiday.

A steady decline from the uptick after Memorial Day began on July 18 and through mid-August before also hitting a plateau with some small climbs. But now the epidemiological curve is moving up again since the last reported fall fell on 1

This raises the question: What is driving the state’s recent rise in cases?

Here’s what the data tells us.

We have already known some of this. Utah, which has the youngest average population in the country, has dealt with younger people running COVID-19 cases with older individuals, and individuals with certain conditions generally suffer the worst consequences. That does not mean that it has been the case all along.

Utahs aged 25 to 44 still make up the majority of cases of other age groups. Now six months into the pandemic, they account for 21,681 cases or approx. 37% as of Tuesday.

Those under the age of 25 are starting to gather new cases, which was feared to be the case as both K-12 and high schools returned beginning in August and continuing in September. Utahs aged 15 to 24 now account for the second highest number of cases with a total of 14,805, approx. a quarter of the state’s total number since March. Persons aged 1 to 14 account for 4,117 cases or 7% of the total number, and those under 1 account for only 241 cases.

How do we know that? Using an internal database of the state Department of Health’s daily information, we compared age group data from three key dates: May 28 (the start of Utah’s first major hike), July 18 (the start of the recession from that hike), and current counts from Tuesday. We also removed children under 1 for this segment because it was a small statistical figure.

It is the data within individual ages that show exactly how this happens. Each group experienced upticks in cases from May 28 to July 18, as the state’s total cases from March and until more than tripled. From a percentage point of view, here’s how each cohort rose from July 18 to Tuesday’s numbers:

In fact, within the age group of 15 to 24, they account for the most recent cases if you start back a month ago on Tuesday. This age group accounted for 4,285 new cases during this period, with 25- to 44-year-olds lagging behind, accounting for 4,070 new cases.

In terms of COVID-19 cases from the start of the pandemic, Utahns aged 15 to 24 passed 45- to 64-year-olds as the second-highest group overall on September 4th. The age group 1 to 14 moved past 65-84 years as the fourth largest group last month.

With ages 1 to 24 rising to the highest rates, it is not surprising that schools are partly the cause of the increase. The state health department has reported 47 outbreaks attributed to schools from August 15 to Tuesday, including eight this week. The outbreak has resulted in 290 cases in total with a median age of 16 years and nine total hospitalizations.

School outbreaks have now moved to the second most common site for non-long-term facility outbreaks, far behind workplaces that saw an increase in outbreaks after COVID-19 restrictions were eased back in May. As of Tuesday, there have now been 721 outbreaks in the workplace, resulting in 4,879 cases, 204 hospitalizations and 15 deaths. The median outbreak is 38 years.

During a media briefing on a new website showing the state’s goals with COVID-19 data, Utah’s interim director of health department, Rich Saunders, said the state was considering setting a goal for a seven-day moving average that was set to 300 or 350 new cases. pr. day, but decided to keep it at 400 to cater for schools reopened. It has jumped from 381.6 cases per day on September 9 to 522.1 new cases per day as of Tuesday.

In another press conference last week, Gary Herbert’s government said it expected outbreaks at schools would result in a review of COVID-19 quarantine procedures for schools until a vaccine is available. He added that he was concerned that individuals – regardless of age – would become complacent about safeguards.

The data also show that those 45 and older experience disproportionately the worst outcomes of coronavirus. In fact, data from the Utah Department of Health shows that 45 and older may only account for 30.8% of cases, but 66% of admissions and 95.6% of deaths. This explains why the health department reports that Utah’s average hospitalization age is 53 and the average mortality rate is 73.

In terms of hospital admissions, the number is lower for younger age groups, but they are rising slowly – and in rates higher than older ones in some cases. From a percentage increase point of view, here is how admissions have increased from July 18 to Tuesday’s numbers:

In a world where people of all ages encounter each other inside and outside the home, cases and outbreaks involving younger people carry the risk of getting other people sick. A Centers for Disease Control study released Friday used three outbreaks of child care in Utah as an example of the risks. It found 12 children trapped COVID-19 at facilities and spread it to 12 of 46 parents or siblings, resulting in hospitalization of one parent.

“COVID-19 is less severe in children than in adults, but children may still play a role in transmission,” the report said. “The infected children exposed to these three facilities had mild to no symptoms. Two out of three asymptomatic children probably transmitted SARS-CoV-2 to their parents and possibly to their teachers.”

An increase in Utah County

Since the pandemic reached Utah, we’ve seen some areas affected worse than others. Salt Lake County remains the leader in most cases, but hotspots have emerged in places like Summit, San Juan and Cache counties. Utah County is now where an extraordinary increase is underway, and it has even topped Salt Lake County in new cases a few times since September despite having nearly half the population.

On Monday, Dr. Angela Dunn, the state’s epidemiologist, found that 39% of all state’s new cases from Friday to Monday were reported in Utah County, even though the county represents 20% of the state’s total population. She also pointed to younger people in the county who were driving the number up.

“Most of these cases are among 14-24 year olds, and the majority of them are among young adults of college age,” she said in a statement. “Colleges across the state and specifically in Utah County have acted proactively to implement solid prevention measures on their campuses. They need the help of their students to act responsibly off-campus. What students do off-campus has a direct impact on a the school’s ability to operate their campus safely. “

Utah County accounted for 6,356 cases on July 18, when the state began its nearly month-long decline in cases. It was approx. 18.6% of the 34,249 cases in the state at that time. The county has since doubled its total number of cases to 13,528 as of Tuesday. The state has reported 24,751 new cases since July 18, with Utah County reporting about 29% of those new cases.

Other places have also experienced increases during this two-month period, but perhaps not as noticeable as Utah County’s. For example, Davis County has nearly doubled its COVID-19 cases over the past two months, jumping from a total of 2,338 cases to 4,440. That is an increase of almost 90%. The Weber-Morgan Health Department also reported an increase of 83.2% from July 18 to Tuesday, a jump from 2,077 cases to 3,805.

In total, local health departments along the Wasatch Front account for 86.5% of cases from July 18 to Tuesday. Other population centers, such as The Southwest Utah Public Health Department (reporting a further 1,431 new cases, 5.8%) and the Bear River Health Department (accounting for 933 new cases, 3.8%) also added the increase in cases since July 18th.

Perhaps more disturbingly, the state’s seven-day moving average of positive test percentage reached 10.6% through 9 September. It is still relatively low compared to other states, but it is the highest it has been since the pandemic began, according to state health department data. After the fall, it had reached as low as 8.2% on 17 August.

The data show that coronavirus has not really gone anywhere six months later.

Coronavirus vaccine can result in half a million shark deaths