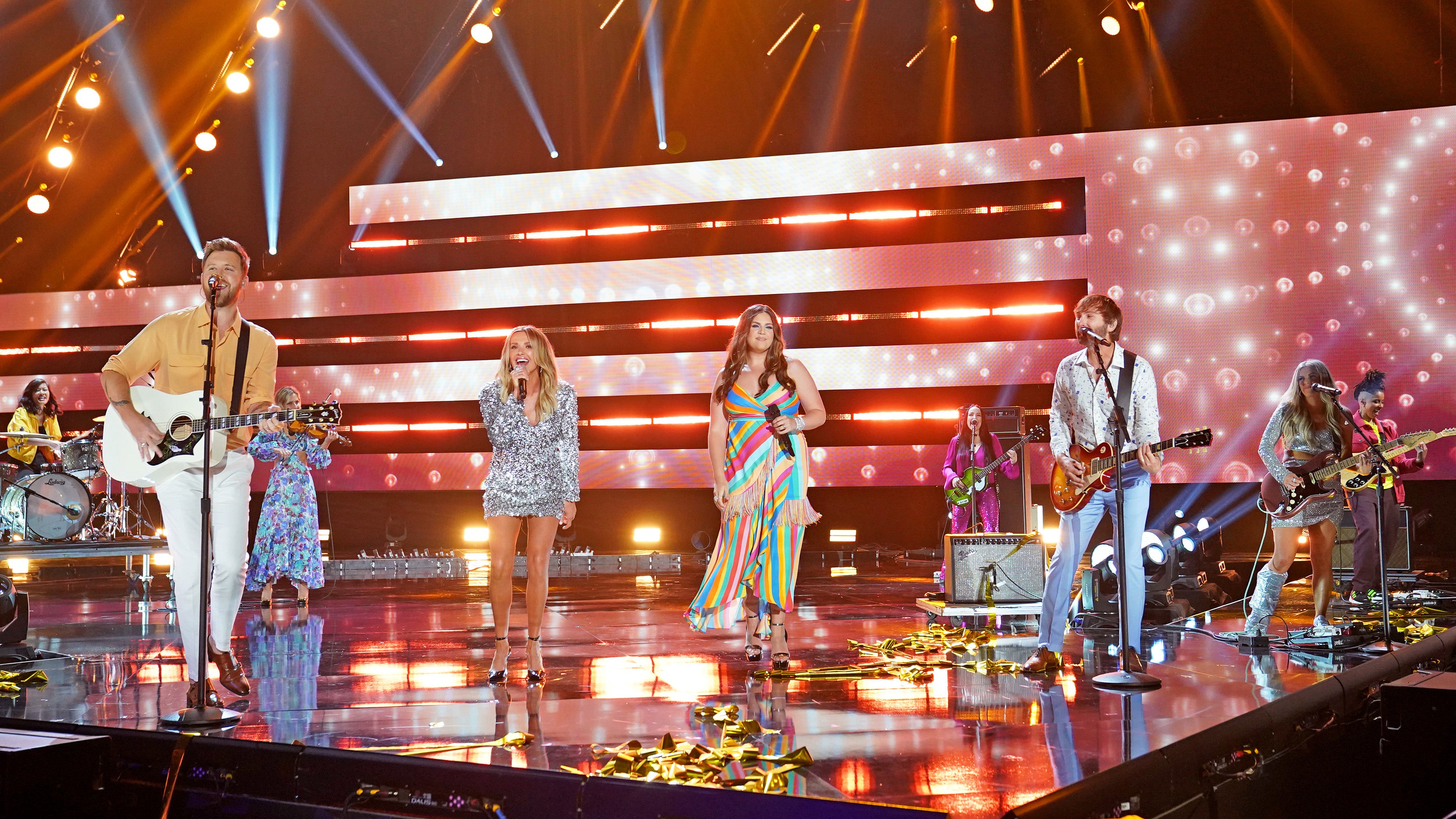 The star-studded event started from Nashville, Tennessee, Wednesday night with a performance by the Lady A. Trio joined the stage by Carly Pearce and Lindsay Ell.

Cameras then led viewers to a farm where Chris Stapleton performed “Arkansas.”

After the two performances, hosts Kane Brown and Kelsea Ballerini took the stage. “After this year … I’m thirsty for a big party,” Brown said.

The first prize of the night – this year’s group duo video – went to Little Big Town for “Wine, Beer, Whiskey.”

“This is amazing. First of all, we’re back and making music for people,” Kimberly Schlapman shouted, referring to the pandemic.

“I know you like to drink songs,” Karen Fairchild added.

The award was presented by Trace Adkins and Taylor Lewan of the NFL’s Tennessee Titans, who stumbled upon country music “lingo” by asking Adkins what a dobro, diminished fifth and bluegrass are – refuting the expert’s answers with silly jokes.

Lewan told Adkins that a diminished fifth was when a drinker has less whiskey than they expected, and that a dobro is a friend who eats too much pizza.

Hailey Whitters then took the stage to sing her hit “Fillin ‘My Cup.” Miranda Lambert also performed a cut version of her hit “Tequila Does,” honoring her Texas roots. She sang around a campfire with Jon Randall and Jack Ingram. Luke Combs also performed.

Linda Martell, one of the pioneering black acts in country music and the first black woman to perform solo at the Grand Ole Opry, received the CMT Equal Play Award.

Comedian Iliza Shlesinger took the stage next to poke fun at country music lyrics, especially from some of the genre’s best female artists.

Carrie Underwood and NEEDTOBREATHE perform on stage at the 2021 CMT Music Awards at The Bonnaroo Farm in Manchester, Tennessee on June 9, 2021. (Photo by John Shearer / Getty Images for CMT)

She pointed out “violent” lyrics in songs by Carrie Underwood and Lambert, suggesting that a “CSI: Nashville” TV show based on songs like “Before He Cheats” was being developed. The remark was a reference to the long-running CBS drama “CSI” and its spinoffs that followed investigators at the scene.

The star presented the award for this year’s collaboration video, which was given to Chris Young and Brown for their tune “Famous Friends”.

Later in the evening, Stapleton and HER entered the stage with a jaw-dropping collaboration. Another breathtaking collab featured Underwood and rock band NEEDTOBREATHE. Luke Bryan also rocked the house with his hit “Down to One”.

HERE and Chris Stapleton will perform on stage for the 2021 CMT Music Awards at Bridgestone Arena on June 9, 2021 in Nashville, Tennessee. (Photo by Erika Goldring / Getty Images for CMT)

The CMT Music Awards will honor country music acts, but will also share its stage with pop and R&B stars, including Gladys Knight, Pink, John Legend, Halsey and Noah Cyrus.

Both Maren Morris and Barrett were originally scheduled to perform at the CMT Awards, but backed up.