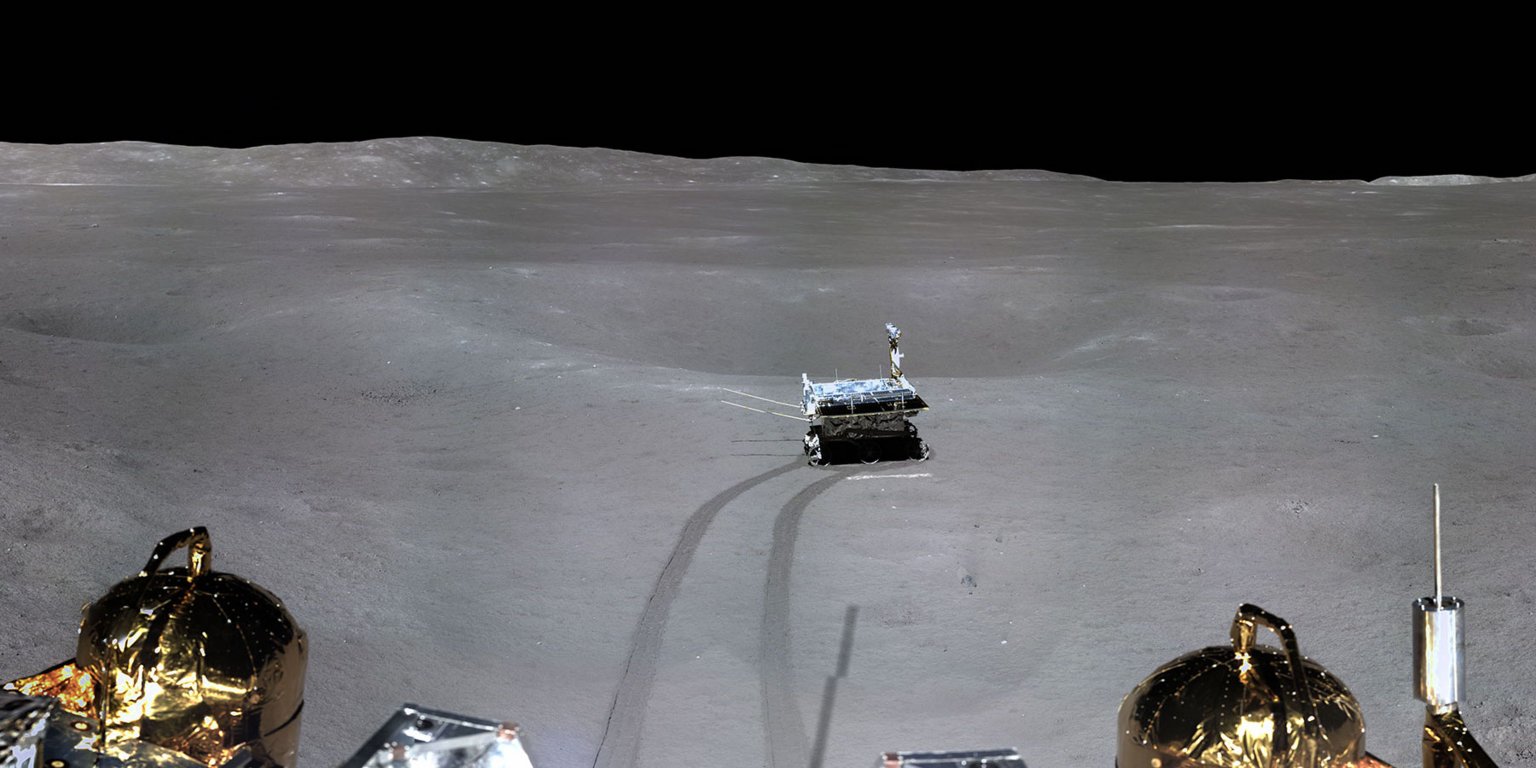 China has released a detailed panoramic image taken by the first spacecraft to land on the half of the moon we can't see from Earth.

The mission, called Chang'e 4, touched down on the moon's far side ("dark side" is a misnomer) on January 3. The size of a desk-size rover it deployed, called Yutu 2, are designed to probe the region over the next six months.

Shortly after the lander and the rover started their work, however, the China National Space Administration put them into a planned three-day "nap," as Space News reported. This helped them survive the equivalent of high noon on the moon, when lunar surface temperatures can exceed a scorching 240 degrees Fahrenheit and risk overheating and damaging the spacecraft.

The noon ended on Thursday, and both spacecraft "were in stable condition" as of Friday, the CNSA said on its website, allowing the Chang'e 4 mission to resume in earnest.

One of the first tasks performed by the lander was photographing the landing site on Friday morning. The CNSA stitched the images together into a 360-degree panorama and released two depictions.

The picture at the top of this story is known as an orthographic projection. It stretches some parts of a panorama and shrinks others to create a single, fish-eye-lens-like image.

The horizontal image above is a cylindrical projection, which is essentially a 360-degree image cut at one point and flattened.

The cylindrical projection was the most detailed of the image released by China and shows the topography of the landscape. It is also the clearest image of the desk-size Yutu 2 rover, which is traipsing across the lunar surface near the edge of a small crater.

Earlier in the mission, the land sent back the first photos from the surface of the moon's father, showing Yutu 2 along with the tracks left by its six wheels.

Scientists in China hope to use the Chang 4 mission to learn vital about the moon's formation, scout for water ice, scan the night sky for radio signals, and even grow silkworms in a self-contained ecosystem.

The first landing on the far side of the moon

The mission is exploring a larger impact site called the Von Kármán crater, which stretches about 111 miles in diameter.

The crater is inside a feature called the South Pole-Aitken basin, thought to be the site of a cataclysmic impact with the moon some 3.9 billion years ago, where deep-down material splattered and remains on the lunar surface for study.

"It's possible this basin is so much that it contains material from the moon's inner mantle," Tamela Maciel, an astrophysicist and communications manager at the National Space Center in Leicester, England, tweeted after the mission's launch on December 7 . "By landing on the far side for the first time, the Chang'e-4 lands and rover will help us understand so much more about the moon's formation and history."

Read more : 'This is more than just a landing': Why China's mission on the side of the moon should be a wake-up call for the world

The mission will again have to take a nap around January 21, when there will be A full moon and a lunar eclipse (colorfully known as a "super blood wolf moon") on the near side facing Earth. This means the site will be completely dark and temperatures may dip to -290 degrees F, creating another danger for the spacecraft to survive.

The mission was named after Chang'e, a mythical lunar goddess, while the 4 indicates this is the fourth robotic mission in China's decadeong lunar space exploration program.

No country or space agency, including Russia and NASA, had ever made a soft landing on the side of the moon until China did with Chang'e 4 on January 3.