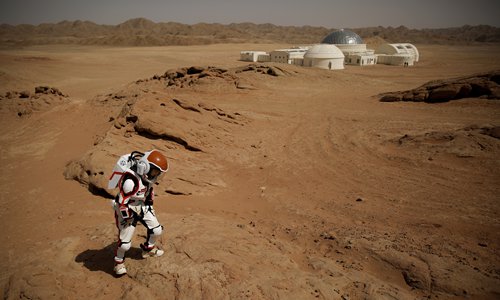 A mock astronaut walks in the Gobi desert near the C-Space Project Mars simulation base outside Jinchang, Northwestern China's Gansu province in April 2018. Photo: VCG

Chinese scientists announced on Sunday that China will launch its first mission to Mars in 2020 and the construction of its rover has been completed.

The mission includes circuits, landing and roving on the Martian surface, an unprecedented achievement showing China's innovative spirit of space research and courage to face major challenges, according to Chinese space experts.

The probe's primary mission is to record the signs of life on Mars, said Ouyang Ziyuan, chief researcher of China's Moon Survey, at a satellite and space conference held in Rizhao, East China's Shandong province from Friday to Sunday.

The mission will also investigate whether the planet has the potential to somehow be transformed in the future to make it lively for humans, the 21

The Chinese rover will investigate the red planet's atmosphere, landscape, geological and magnetic properties that could trace Mars & # 39; and the solar system's origin and development, the newspaper reported.

The launch is time-limited when Mars and Earth's circuits are closest to each other, "every 26 months and lasts about a month," says Pang Zhihao, an expert in space research technology in Beijing, Global. Times on Sunday.

Of the 45 previous missions to Mars, only 19 have been successful.

Among the 19 successful missions, some were designed to broadcast satellites around the world, and some were just fly-city missions, according to archives held by NASA.

Transmissions from Earth take nearly 10 minutes to reach the orbiter, so landing commands must be issued before the lander is released, and many unpredictable situations may occur during the descent called "seven minutes of terror," Pang said.

Without real-time monitoring, the probe must "take its own decision", Pang noted.

A successful landing is only the beginning of the rover's mission in a hostile environment.

Another challenge comes from the devastating dust storms on Mars, the worst of which is comparable to a force of 12 typhoon on Earth.

Such dust storms occur almost every year on the red planet and can last up to three months, says Pang, noting that the Mars rover must have a strong storm resistance system.

Because a dust storm could damage a rover's solar system, a solution could be to use nuclear power, Pang said.

China's Mars Orbiter will carry seven scientific units, while Rover will have six.

"Although China's Mars mission has started too late, we have a high starting point with the three-in-one design, and we are ready to accept the challenges," noted Pang.

In a billion years from now, lack of oxygen will wipe out life on earth