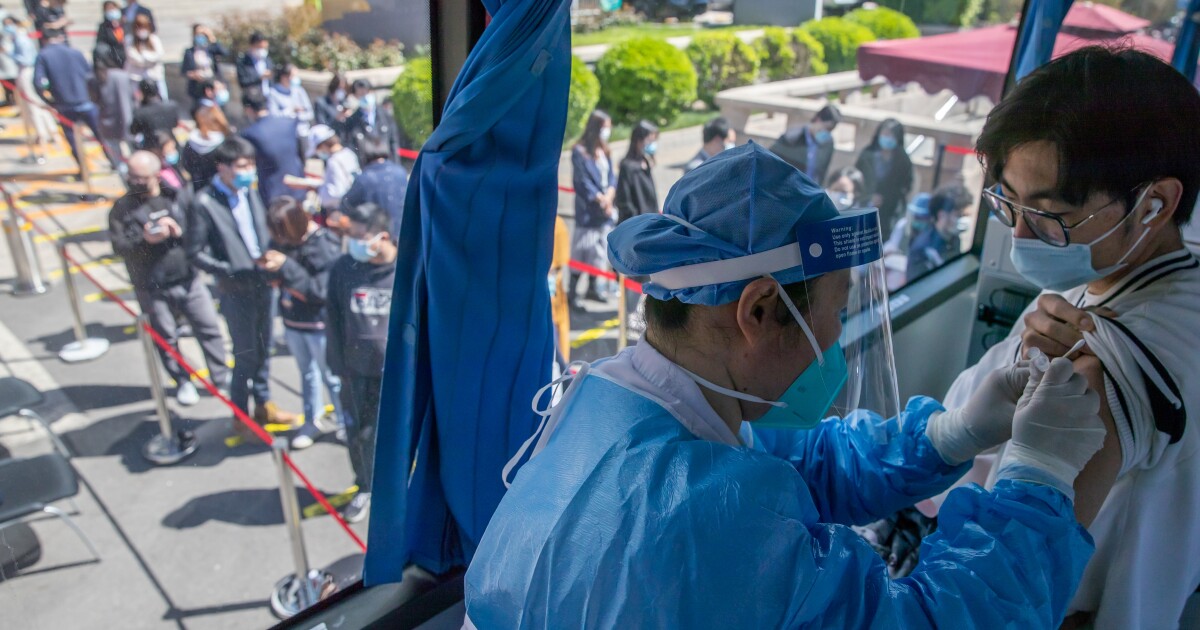 The poster was not the funniest marketing campaign, but it made its point: “Come and get your eggs !!!”

Every person over the age of 60 who received a COVID-19 vaccine at this community center in Beijing was entitled to two boxes of free eggs. The deal was part of a nationwide push to raise vaccination rates in a country where successful containment of the pandemic has spurred complacency despite ample supply of vaccine.

Chinese authorities have set a target of vaccinating 40% of the population of 1.4 billion in June. As of Wednesday, according to health authorities, nearly 1

80 million doses had been administered, although the number of fully vaccinated people representing is unknown.

To achieve their goals, the authorities have sent local-level workers across the country to knock on doors, send out calls on village speakers and offer perks to the vaccinated.

Free eggs and park tickets have been a common offer in Beijing. In a district of Shenzhen, companies donated 2,500 coupons for fried pigeon and free soy milk to entice people to roll up their sleeves. In another, patriotic films were shown to “warm the hearts” of those vaccinated.

One of the reasons for China’s initially slower rollout of the vaccine is its success in stopping the spread of the virus. China has had only a handful of small outbreaks this year, all quickly contained through severe lockdowns and quarantines. Most of the country has lived normally for several months with group gatherings, open schools and workplaces and little sense of urgency around vaccination.

At the same time, there has been some skepticism about the effectiveness of China’s vaccines, which have been sent to dozens of countries as part of Beijing’s vaccine diplomacy, although manufacturers did not release any official data on their final trials.

Experts from a World Health Organization advisory panel recently said they had seen data from Chinese companies Sinopharm and Sinovac that their vaccines met the WHO’s requirement of 50% efficacy and full safety. The data have not been released, but Sinopharm has claimed that its vaccine has 79% efficacy, while Brazil, Turkey and Indonesia have said that Sinovac trials in their countries showed a range of 50% to 83% efficacy.

On April 10, Gao Fu, the head of the Chinese Center for Disease Control and Prevention, surprised some in the government when he said at a medical conference that the effect of China’s vaccines was “not high” and that it could be improved by adjusting the number of doses, changing the time between doses or mixing different types of vaccines.

He also stated that mRNA vaccines – the type manufactured in the United States by Pfizer-BioNTech and Moderna – have achieved remarkable levels of immunity and that China should not overlook such technology. It was a scientific observation that immediately became political. Gao was actually correct: China’s vaccines have a lower effectiveness than those produced by Pfizer-BioNTech and Moderna.

But to say so in China’s hypernationalist milieu, where vaccines have become a symbol of the country’s scientific prowess and global influence, was controversial. Chinese officials and state media have in recent months questioned the safety of foreign vaccines while promoting China’s offerings, despite a lack of transparency about their trial data.

Gao was soon quoted again in state-affiliated media, saying that foreign reporting of his admission that Chinese vaccines provide less protection was a “complete misunderstanding.”

At the community vaccination site in Beixinqiao, a district in central Beijing, no one seemed to have heard of Gao’s statements or been deterred from being vaccinated.

“I think our country will ensure the safety of its people,” said Cui, 28, a woman who had just received her second shot and did not give her full name.

A volunteer named Qi Chao, 40, stood in the stairwell of the building, holding up QR codes for visitors to scan and register for their shots. They came in a steady stream: a young woman helping her spectacled father sign up on her cell phone, a street sweeper still in uniform, a woman in a plastic bag of vegetables standing outside shouting questions to her friend upstairs before come in.

Some visitors had questions about their eligibility – a mother who was breastfeeding, an elderly woman with an arm injury, a man with high blood pressure – but they were few. Qi, the volunteer, said almost no one asked what vaccine they were getting or asked about the effectiveness.

“There is still no difference between the vaccines,” Qi said. “I do not know how long it lasts, how well it works, but of course it is useful to have it and better to have it than not.”

“Having some protection is much better than having no protection,” said Keiji Fukuda, director of the University of Hong Kong’s School of Public Health. As COVID-19 continues to spread and mutate, individuals are likely to need additional shots no matter what vaccine they receive now, he said: “It is better to be vaccinated early with the approved vaccine that is available. “

Gao’s proposal to mix vaccines – using different types that stimulate the immune response in different ways – is under serious consideration in several countries. Researchers at Oxford University are testing whether combinations of the Pfizer and AstraZeneca vaccines provide better immunity than both vaccines alone. Experiments with an AstraZeneca combination with Russia’s Sputnik V vaccine are also underway.

Researchers from China’s National Institutes of Food and Drug Control have experimented with combinations of vaccines on mice and found that some produced a stronger immune response.

Gao, the CDC leader, and researchers from the National Institutes of Food and Drug Control did not respond to requests for further comment from The Times. Official guidelines in China recommend using the same vaccine product for both shots. But there is a possibility that “mixing vaccines” could pave the way for the use of foreign vaccines in China.

The Chinese company Fosun Pharma has had an agreement with BioNTech since December to December to distribute 100 million doses of the mRNA vaccine it developed in connection with Pfizer. But the mainland authorities have not approved the vaccine despite its approval by the WHO and Hong Kong and Macao’s separate regulators.

Clinical trials with the vaccine are underway, but it is unclear whether China will first approve it or prioritize a fully Chinese-made mRNA vaccine.

Wall Street Journal Friday reported that Chinese officials plan to approve the BioNTech vaccine within the next 10 weeks, citing unnamed sources. But that depends in part on approvals of the Chinese vaccine abroad, the Journal reported.

Even China’s lower-efficacy vaccines have been shown to be valuable in preventing serious illness in those infected, he said. This means more for individual protection, while higher-efficiency mRNA vaccines may work better to build up flock immunity. The cost of producing, transporting and storing different types of vaccines also influences decision makers’ decisions to use.

Political considerations about saving face should not come into play in a medical context, Ding said. Foreign drugs are widely used in China without politically sensitive implications, he pointed out. Why should vaccines be different?

“At the end of the day, it’s about serving people’s needs,” Ding said. After all, it is also a political consideration.

Florida Gov. Ron DeSantis declares a state of emergency, but Sunshine State does not need to panic, analysts say