Capuchin monkeys have been using stone tools for around 3,000 years 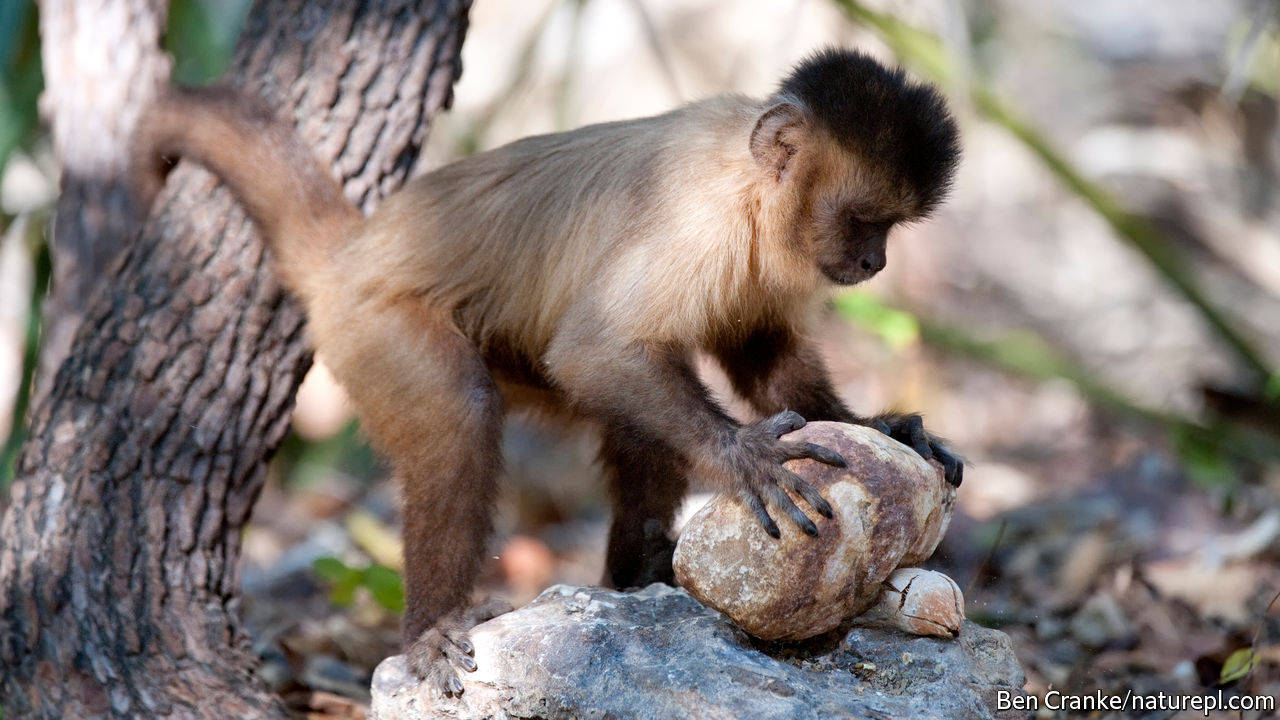 O NE OF THE is famous in cinematic history comes early in "2001: A Space Odyssey". A primitive hominid hurls a bone club into the air, and a match to a spacecraft instantly tells the millennium-long story of human ingenuity. Tools maketh man. But there was never a human monopoly on tool use, as a new paper in Nature Ecology & Evolution shows. A team led by Tiago Falótico of the University of São Paulo, in Brazil, and Tomos Proffitt of University College, London, has shown that a species of monkey called the wild bearded capuchin has been employing stone tools for perhaps 3,000 years, and that their use of the technology has changed over the course of time.

Capuchins, chimpanzees and sea otters, among others, are known to use rocks to crack open, respectively, nuts and shellfish. And earlier you found Dr Falótico found evidence that, in capuchins, this habit goes back at least 600 years. Though some question whether bashing a utility with a rock truly qualifies as "tool use", capuchins (as the picture shows) use both hammerstones and anvils ̵

1; which demonstrates quite a high level of sophistication.
Get our daily newsletter [19659005] Upgrade your inbox and get our Daily Dispatch and Editor's Picks.

They also demonstrate sophistication in the wielding of their tools, because not damaging the soft kernel or a utility while breaking the shell takes skill. Cracking open a cashew, the favorite for this treatment, requires the tool-wielder to employ a single, practiced motion. First, the animal brings the hammerstone down two-handed for a glancing blow on the nut's father side. It then rolls the stone towards itself, over the utility. Youngsters take around eight years of mimicking their parents to get the knack of all this. And although the stones are used are not actually modified for the task, monkeys are valid in searching for and selecting those of the perfect shape. Dr. Falotico and Dr. Proffitt returned to the site of the previous excavation — a part of the Serra da Capivara National Park in the Brazilian Amazon. They dug into an area of ​​67 square meters, to which the monkeys bring stones from a nearby stream bed. The site's capuchins use quartzite cobbles as hammerstones, and tree limbs and loose stones as anvils. split the site's history into four phases. Capuchins first swung in the area somewhere between 3,000 and 2,400 years ago — the beginning of a period the researchers call Phase IV. This is the oldest known instance of non-ape tool use. Phase IV hammerstones are light and have many impact marks. These were mainly on seeds (possibly from cassava) smaller than the cashews, which today's monkeys pound, meaning hammerstone and anvil often came into contact with one another.

Phase III, between 640 and 565 years ago, featured transitional behaviors that led to Phase II, from about 257 years ago, when hammerstones were heavier and are associated with many large manufactures, suggesting a food source bigger and harder than cashews (the hard-shelled jatoba fruit is a possibility). More recently, in Phase I (from 27 years ago), cashew residue on stones suggests the monkeys were moving towards their present-day alimentary focus. What Dr Falótico and Dr Proffitt do not know is whether the variation they saw is of different groups of capuchins, with different habits, occupying the site at different times, or alternatively, whether a single lineage of the animals has changed its nutritional culture over the years.

Until Dr Falótico's original dig, chimps were the only species other than human beings for which an archaeological record of tool use had been found. (In 2007 researchers discovered chimpanzee-modified stones that were 4,300 years old.) There is no reason, though, not to expect the finding of further, and perhaps older, sites in the future. Moreover, studying how capuchins and chimps have used tools may give an explanation of how the process happened in people. One thing Dr. Falótico and Dr Proffitt have noticed is that some of the sharp flakes that fly off when hammer meets the tile look identical to Stone Age blades made by human beings. Capuchins are not yet known – so far as are known – thought to use such flakes as knives. But their own "2001" moment awaits them in the future.