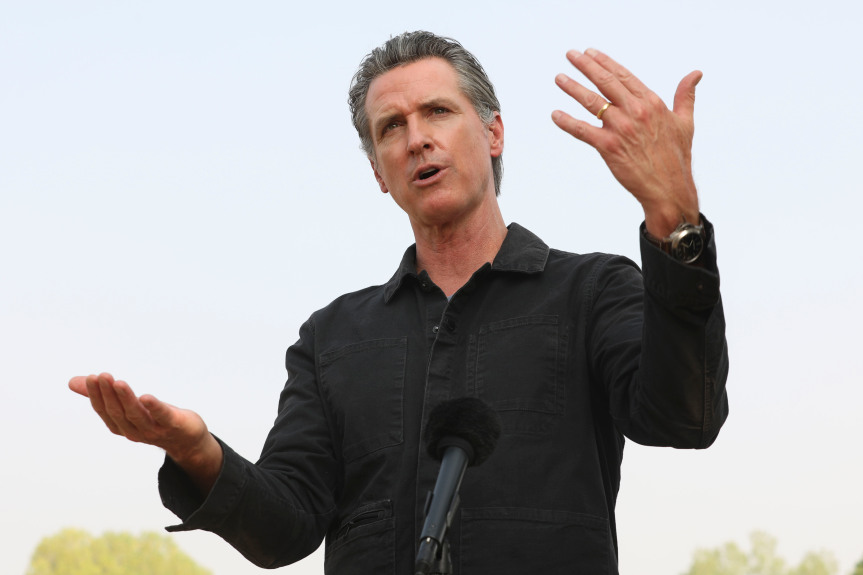 Governor Gavin Newsom said Wednesday that there is nothing in California’s guidelines that prevents Pac-12 teams from playing, a statement that appears to be in violation of his own rules.

“There is nothing in the state’s guidelines that denies Pac-12 having conference games,” Newsom said in response to a question from the Bay Area News Group.

“There is nothing to deny that the games occur.”

“I want to make this crystal clear,” Newsom said. “Nothing in the state’s guidelines denies Pac-12’s ability to resume. It has been a misrepresentation of facts. ”

However, state guidelines clearly prevent players from practicing in cohorts larger than 1

Crucially, Newsom said the state would be willing to “engage Pac-12” on the rules of cohorts – a development that could allow teams to practice and compete.

“We are committed to working with Pac-12,” Newsom said. “Remember, these are student athletes.”

The conference is unable to restart its football season due to security concerns and state restrictions.

The first hurdle should be cleared later this month when fast-response daily antigen samples are delivered to athletic departments.

These tests, designed to eliminate Covid-19 proliferation and keep infected players off the field, should lead to Pac-12 medical teams giving approval for practice and competition.

However, California schools cannot move forward, even with the antigen trials, until state and local restrictions are lifted.

Currently, Los Angeles teams cannot gather in groups of more than 12 for training, making it impossible to play a sport that requires 22 players on the field at one time.

According to section 5 of the state rules:

“Train in cohorts. IHEs (higher education institutions) should establish cohorts as a strategy to minimize the potential spread of COVID-19. A cohort can consist of six to 12 people, all members of the same team who consistently train and participate in activities together. Cohorts should avoid interfering with other groups. ”

(This passage is on page 31. Here is the link to the full guide.)

Restrictions vary slightly based on local regulations set by LA County, Santa Clara County, and the City of Berkeley.

“Our universities in California and Oregon do not have the approval of state or local public health officials to start contact practices,” Pac-12 Commissioner Larry Scott said today after the Big Ten announcement that it would begin playing October 23 to October 24. and leave the Pac-12 as the only major conference on the sidelines.

“We are hopeful that our new daily testing function can help satisfy public health approvals in California and Oregon to begin contact practices and competition.”

Meanwhile, the NFL franchise is playing in California.

The Rams opened their season at home Sunday night, but seven miles away, USC cannot play 11 on 11.

The 49ers opened at home Sunday afternoon, but 15 minutes up the road, Stanford are banned from letting more than two players touch the ball in a given game.

The antigen tests, made by Quidel, are more effective at reducing proliferation than the PCR tests used by the NFL, according to computer modeling.

“From a theoretical perspective, it’s a very high bar, and one could argue that what we are doing is a higher bar,” than the NFL, said Dr. Kimberly Harmon, a football doctor at the University of Washington and a key member of Pac-12’s medical advisory team.

“The almost daily testing should keep the athletes safe.”

Until the public health restrictions are lifted, it does not matter.

*** The Pac-12 Hotline is not endorsed or sponsored by the Pac-12 Conference, and the views expressed herein do not necessarily reflect the views of the Conference.