BYU Football: Live coverage from the Cougars’ game in Houston 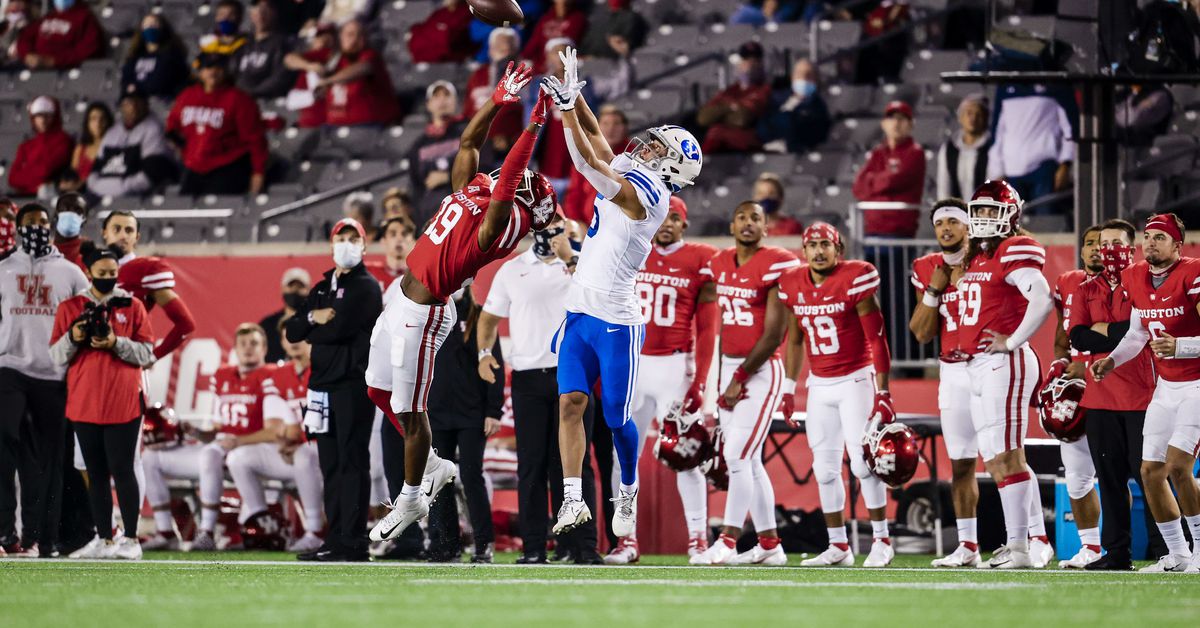 BYU is expected to face its toughest test when the blue-clad Cougars face Houston on Friday night.

BYU enters the game – set for a kick-off MT 19:30 at TDECU Stadium in Houston (the game is broadcast on ESPN) – with a perfect 4-0 record, ending a home game in three games last week with a 27- 20 victory over UTSA.

Houston, meanwhile, comes into the game 1-0 after beating Tulane 49-31 and rallying from an early 24-7 deficit to roll past Green Wave.

Houston puts up a huge stand and fills Masen Wake with 1 yard loss as BYU faced a fourth-and-1 in Houston 2. This could be a big moment at the end of what has been a tight game so far, and with Houston in clear control of momentum now.

Clayton Tune is on fire right now, after finishing his last eight throws. The latest is a 5-yard touchdown throw for Nathaniel Dell on third-and-goal, and Houston is back out front after a seven-play, 61-yard drive.

If it looks like UH has had the ball all night, it’s because it has; Possession time is Houston 15 minutes, BYU 6.

A few notes from the opening quarter:

Zach Wilson is off to a great start, leading BYU on a seven-play, 85-yard drive limited by a 1-yard touchdown run from Lopini Katoa. On the drive, Wilson had a 32-yard run, followed by a 35-yard pass inside Houston 5 on a trick play. He has completed 3 out of 3 passes for 128 yards and a score and has a 568.4 pass rating.

BYU has the perfect answer to Houston’s opening goal as Zach Wilson hits Dax Milne for a 78-yard touchdown pass on BYU’s first offensive play of the night.

The Zach Wilson TD pass goes on for 78 yards, the longest in his career. Also a new career-best for Dax Milne. Milne and Wilson joined a 70-year-old vs. Troy. #BYUFootball

Houston takes his opening drive 65 yards to score, kicking a field goal after taking 5:07 off the clock on the 10-play drive. Quarterback Clayton Tune went 4-for-4 past in 59 yards on the drive.

Here are a few links to other stories you might want to read before the competition and during the game:

BYU OL Tristen Hoge is still out with pneumonia and did not travel; However, the Cougars welcome to the Olympics Keanu Saleapaga tonight.

BYU Center James Empey is out there warming up; It seems he prefers his right ankle a bit.

It looks like Caden Haws will take Khyiris Tonga’s place on the three – man shield that protects the player and joins the regular Bracken El-Bakri and Pepe Tanuvasa.

BYU backup QB Jaren Hall traveled the trip and is out there helping the other QBs with snaps and the like, but he is not dressed to play.

This will be the first game BYU plays in front of fans during this COVID-19-influenced season:

An hour before the kickoff in Houston, and very few of the approximately 8,500 fans allowed to enter the stadium have arrived. 100 BYU fans arrived early.

A look into the stadium’s foreplay: