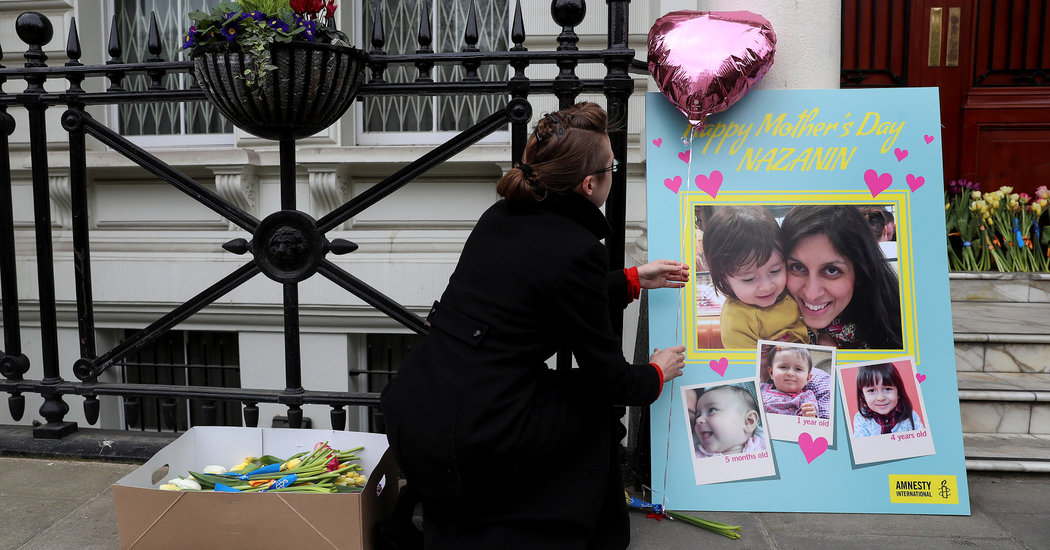 LONDON – A British-Iranian woman who has been imprisoned in Tehran has begun a new hunger strike to claim her freedom, said her husband as he promised to support her by fasting outside the Iranian embassy in London.

Nazanin Zaghari-Ratcliffe was the project manager of the Thomson Reuters Foundation when she was arrested in April 2016 at a Tehran airport when she returned to Britain with her young daughter, Gabriella, after a family visit.

Ms. Zaghari-Ratcliffe, now 40, was sentenced to five years in prison after being convicted of plotting to overthrow Iran's office building, a heavily denied charge by his family and founding, a charity operating independently of Thomson Reuters and Reuters News . [1

9659002] "Today I received a phone call from Nazanin in prison," said her husband, Richard Ratcliffe, in a statement on Saturday. "She had informed the judiciary that she had started a new hunger strike – she wants to drink water – to protest against her continued unjust prison."

"She sounded nervous, but calm," he added. "Her claim from the strike, she said, is for unconditional release. She has long been eligible for it."

Iran's judiciary could not be immediately reached for comments on Saturday. Tehran has previously said that her case is in the hands of the judiciary.

The hunger strike comes from increased tensions between the West and Iran, which the United States and Britain owe to explosions on two oil tankers in the Gulf of Oman last week. Iran has denied involvement.

Britain has long called for Mrs Zaghari-Ratcliffe's release, a demand repeated on Twitter by Foreign Minister Jeremy Hunt on Saturday. Her prison has added further tensions to Britain's already strained ties with Iran.

In 2017, Boris Johnson, then the foreign secretary and now the leading runner to replace Theresa May as prime minister, was accused of worsening her situation when he told Parliament that her conviction of excitement was rickety because she had "simply taught people's journalism."

Ms. Zaghari-Ratcliffe's employer, family and local parliamentary representative said that Johnson's statement was not only untrue but also created new risks for her. Days after Mr Johnson's remarks, Mrs Zaghari-Ratcliffe was taken to a new hearing to accommodate new charges, and Mr Johnson's words were cited as evidence that she had been engaged in "propaganda against the regime."

In January, Zaghari-Ratcliffe went on a three-day hunger strike after the family had said she had been denied permission to see a doctor to examine lumps in the chest and address other health issues. Her family said she had completed the hunger strike a few days later after receiving medical attention.

Her husband said he would also experience a hunger strike from Saturday: outside the Iranian embassy in London.

Mr. Ratcliffe said his wife "had promised that if we passed Gabriella's fifth birthday with her still inside, then she would do something – to mark both governments that enough is enough. This has really gone too long."

High diplomatic attempts to secure her release have so far failed. Mr. Hunt gave diplomatic protection to Zaghari-Ratcliffe in March, but Iranian officials have refused to recognize their dual nationality.

Last year, she had three days to see her young daughter and other relatives and then returned to jail.